Does anybody have a 16x14 bass drum they love and enjoy playing? Because 18" isn't small enough haha, I'm thinking about making one with rogers or gretsch parts.

Would love to see some pictures and rundown of how you handled.

yeah I didn't cut nothing.. just drilled for rail, added hoops, ts claws, cowbell spurs...big lug Gretsch 16s are easy to convert quickly.
since getting an 18" set I've neglected these . Used them a lot 5-10 years ago. Will be getting them out more this summer hopefully.
Not really hip or good looking but for easy jobs. 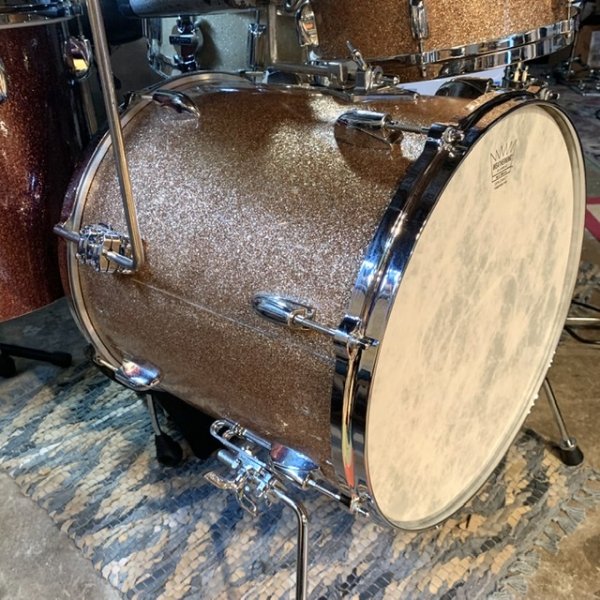 I initially planned just to experiment with this and then maybe cut it down shorter and add bass hoops and claws if I liked it, but the fact is I like it enough now that I don’t want to mess with it further.

First I tried a Pearl jungle kit adapter (jury rigged to the hoop, to avoid drilling) and that was unstable. Probably bolting it on properly to the shell would have stabilized it, but then I got a Trick adapter lift, and that is rock solid. Only downside is it won’t fit in a case with the lid closed. Maybe I’ll drill for the Pearl after all, but it’s a RB drum.

The spurs are the long ones that came with the Trick adapter, and I used Inde BR2XL brackets. That all works perfectly with no qualifications.

I tried several different combos of heads and muffling from several brands. With each it was a balancing act between volume, tone, and decay. I play jazz and funk, so a midrange “boom” with a longish decay suits me well. What I’ve settled on, and they’ve worked out really well at both practices and gigs, are an Aquarian clear performance 2 batter, a Fiberskyn diplomat classic fit reso, and a modest section of acoustic foam inside, just to kill the “basketball ringing”. It lightly touches the batter head but not the reso.

Favorite beater is a Slug punch collar. The IP Chris McHugh had deeper boom, but I find it harder to control, and I feel the sharper attack of a hard beater helps it cut in an unmiked setting.

Here is a Gretsch vintage kit which has SSB badges - 8x12, 11x13, 14x16 (old FT) converted to a bass. I love this kit as it is small, gorgeous, tuned high for bop, and medium for rock/pop/blues, etc. You won't be playing any stadiums or large rooms, but I've played in museums, libraries, outdoor acoustic gigs, etc. If you mike it, the bass is decent. Running coated ambassadors on toms & Super Kick on bass batter. I also have a Sonor safari kit in grey sparkle - nice & cheaply obtained, and a great little kit, but I dig the Gretsch more. Pics are from a museum gig from early Dec. Bass was a bit loud for that large room and reverberated well enough to easily carry a 2nd set blues jam with multiple guitars. 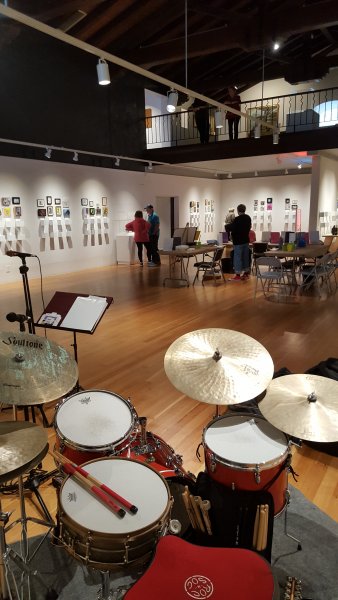 I have a converted 16” Yamaha floor (80’s birch/mahogany, the “Anton Fig” cobalt blue), with wood hoops, got the Evans “made for wood hoop” heads, it is a fantastic little drum. Used with a 10” tom, 13” hanging floor, its great for parties or small venues and can be mic’d to sound bigger (but there is a physical limit to the low frequencies obtainable by a vibration of a 16” head).
T

Didn't we just have a thread about these? Anyway, here's my 12x16 Gretsch:

This one is a 13x16, which splits in half for nesting. The toms are just old marching drums that I found, but I eventually plan to build toms to match the 16" BD.

I'm using this 16x12 6-ply Ludwig marcher with a Dixson BD lift miked for smaller gigs and am quite happy.

egw said:
This one is a 13x16, which splits in half for nesting. The toms are just old marching drums that I found, but I eventually plan to build toms to match the 16" BD.
Click to expand...

Do both of those toms fit in there? What is that rack tom?

D. B. Cooper said:
Do both of those toms fit in there? What is that rack tom?
Click to expand...

Yeah, the 10 fits in the 13, and the 13 fits in the 16. The 13 needs to have one head removed to nest them all together though. Once I get around building the toms to match the BD, the 13 is going to be split and have latches.

I have found that the 16" bass drum doesn't give enough boom.
I have an 18" Tama bop kit that works very well...but my 16 " just doesn't have enough volume for me.
And if your keeping the volume down , it usually means there's a small stage , so yourfootprint needs to be smaller.
This is why I got a 20x8 premier heritage because going up doesn't matter it's the deep bass drum footprint that takes up unneeded space.
Anyway..... I know the thread said "people who love" their 16".
And it's a beautiful drum so I do love it but I never play it in my current blues band. I do use it for my outdoor parties tho.
Here's pics of my 16" deep red sparkle premier setup.
16" floor tom is a cosmic percussion , very close in color. I have a Sonor Safari kit that came with a 16x16 bass drum. It works fine for my applications, but that is normally miked up.
T

Nice use of mixing in the bell on the ride , it adds to the groove.
I do this a lot in my playing.
F

Blair, Just curious, Is it birch or Mahogany
F