Hello fellow Forumites,
I got this one off of Reverb. This drum has been around for a while and the owner worked with me on an even lower price. WFL two-tone pearl drums are pretty scarce so this was a good drum to add to the collection.

THE SHELL:
The two-tone pearl finish is in pretty good condition but there are a few divots here and there in the finish. I was able to remove a few layers of schmutz via my usual cleaning/polishing regimen. The inside is clean with a tight badge and grommet. There were a few undisclosed gremlins that I had to deal with... 1. Some “brainiac” of yesteryear decided – for reasons unknown to me -- that an extra hole and a bolt would be perfect for the left side of the butt plate. My only guess is that maybe there was a heater/light bulb attachment there at some point in time. I dug into my vintage heater/light bulb parts bag and rigged up a more presentable and justifiable solution... 2. There were 2 extra holes right between where the twin strainers are attached; a factory error? Fortunately the extra holes filled in nicely with some mahogany filler and are covered internally by the attachment washers... 3. One of the strainers needed a pin instead of the metal wire that was holding it in place. This was an easy fix for my machinist and the official “saver of vintage parts”, Abe Abello. The seller was easy to work with and made a fair adjustment to the original price.

THE HARDWARE:
The nob hardware is all original but needed a good cleaning and polishing. The 16 staggered lugs are kind of in between the WFL Zephyr and WFL Imperial lugs. Notice how WFL had to modify the lug directly above the twin strainers as compared to the other lugs. I also have a WMP version of this drum with the same lug situation. A word of caution about these lugs. Be careful when you unscrew them from the shell as the internal spring is just wedged in there and will pop out and go flying across your workbench.

Of-the-era WFL top and bottom heads rounded out this cleaning/restoration.

the lugs almost remind me of the much later Standard lugs...a little. How'd they do a twotone wrap?

dtk said:
the lugs almost remind me of the much later Standard lugs...a little. How'd they do a twotone wrap?

Seems a bunch of those twin strainer drums have two "extra" holes behind the strainers. I could see guys ditching the twins for a normal throw off, but what are the odds that so many would have had the inclination to return the originals before selling the drum (or dying)? Maybe WFL pre drilled most of their snare shells for regular strainers and then just redrilled if a twin was ordered.

Great drum Mike as usual. I have seen several of those twins with lugs like that but this one is the first I have seen with those strainers. All of the ones with those Lugs I have seen used the strainer in this picture. The ones on your drum are the short versions and I have only seen them on drums that were 5x14 size. I have seen SO many inconsistent things with WFL that it makes me think that as a new company, they just used the catalog as a blueprint and used whatever worked to get drums out the door. I have a DUCO twin myself that has zephyrs on it. When I took the drum apart to clean it it had extra holes under the zephyr lugs and an imprint into the finish where imperial lugs were. There is also an imprint where the zephyr lugs have been. It doesn't make sense to me but I am thinking this might be a factory job. Almost like this drum was sitting around the factory around WWII and it was stripped for the metal parts. After the war I'm guessing zephyrs were used to complete the drum. It's a crazy idea I have but it doesn't make much sense for the switch. 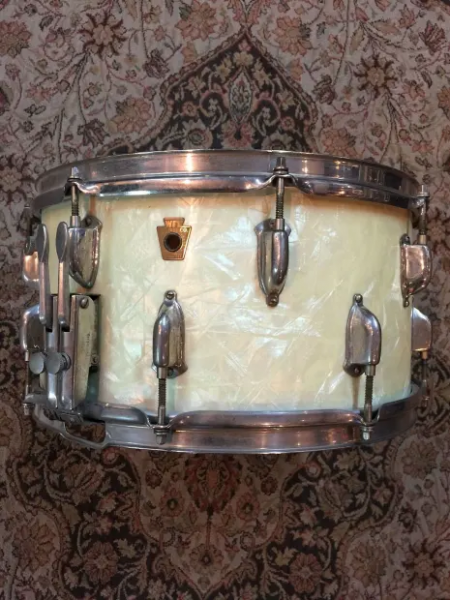 Good call wflkurt,
I have the same WMP Twin Strainer snare with the larger twin strainers as you mentioned...if you go to my past posts you will see it: 1939 WFL 7x14 WMP Twin Sensitive Hollywood Swing Model or you can see it on page two of my posts on vintagedrumstalk.com That drum also has 2 extra holes that have no logical explanation. Soooo.... a few thoughts regarding the drum in this post: 1. The extra holes are right in between the twin strainer mountings...factory error?...or was the drum originally a single strainer version and retro'd after market? 2. The butt plate is the wider one that allows for two sets of snares and there are no extra holes at the butt plate side. Thoughts?

We now return you back to the normal people section of the Drumforum...

Mike, I have no idea why but WFL used two different styles of strainers. There is the kind like the one on your rose duco drum that came in right, left, single, nickle, chrome and tall and short(to work with 5x14 sized drums). There is also the kind that is on the wmp drum I posted and the strainer tops look like paddles of a boat. From what I have seen those came in right, left, single, nickle and chrome. I have never seen a short version of this strainer(though I fully expect to be surprised one day when one shows up on a drum someone has). The other odd thing about the two different strainers is that they don't use the same hole spacing! It's weird that they would do this but the strainers are not interchangeable. The paddle looking strainers are also very fragile as the tips are notorious for breaking off. The other version is built like a tank.

I have seen SO many inconsistent things with WFL and my thought is that being a new company, mistakes happened. WFL senior was never one to waste anything from what I have been told and I would not be the least bit surprised if a drum with a mis-drilled hole was used anyway. Possible the larger sized butt for use with a dual strainer was put on and holes for a single strainer were drilled or vice versa. Either way if the mistake was done, I could very easily see WFL senior or someone high up on the line decide that the holes could be covered over with two strainers. This is all a guess and quite possibly someone put a regular strainer on there at one time. The second twin strainer drum I ever got was through Jolity drum farm back around 1994. It is a 1939 7x14 and someone had swapped out the strainers for a Slingerland rapid throw-off. Along my travels of relentless search, I manage to find the correct throw-offs and make the drum complete again. If someone were to look they would see the extra holes but they are nicely hidden behind the two throw-offs.

The other odd thing WFL did was they would equally put strainers to the right or left of the badge. At first I thought they were doing some left handed models but I have seen an equal amount on either side so my left-right theory is shot at this point. I'm wondering if they made a lot of them to the left of the badge(looking straight at the drum) because the badge would show if the snare drum was heavily tilted in the snare basket like a lot of players did in the 30's. Again just a guess. I do love seeing all the oddities that WFL would punch out. I have a million questions I would love to ask WFL senior if he were still alive. Fire up the time machine!
You must log in or register to reply here.
Share:
Facebook Twitter Reddit Pinterest Tumblr WhatsApp Email Link