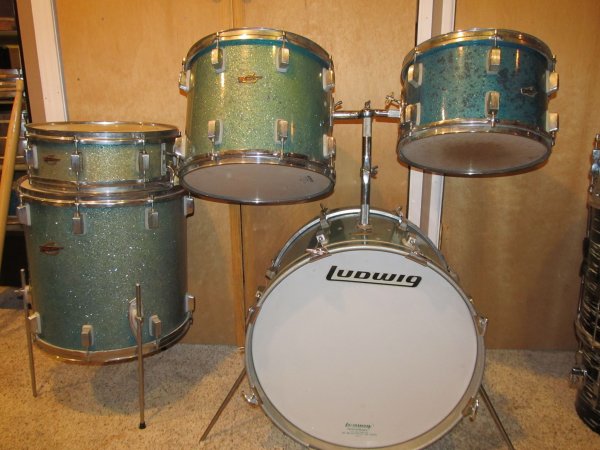 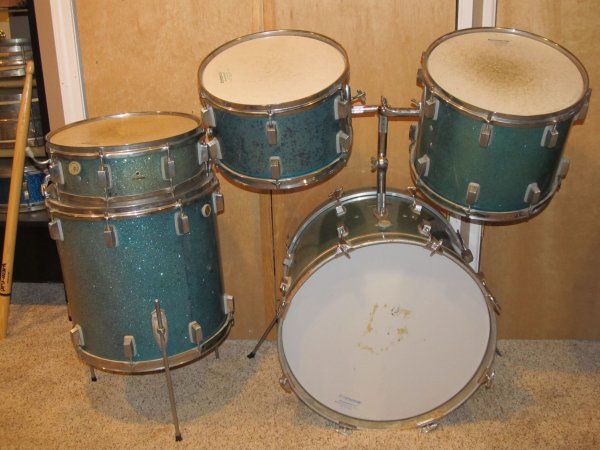 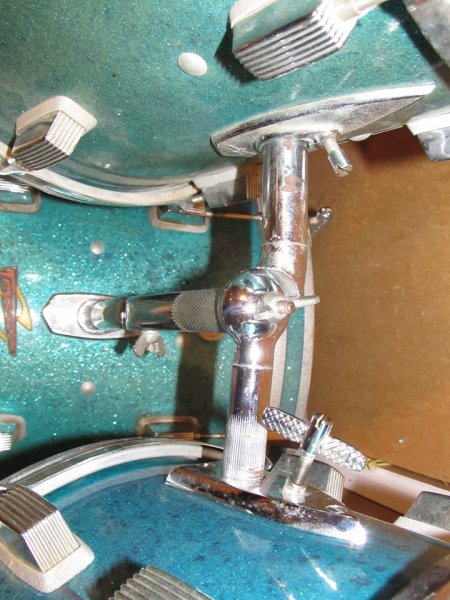 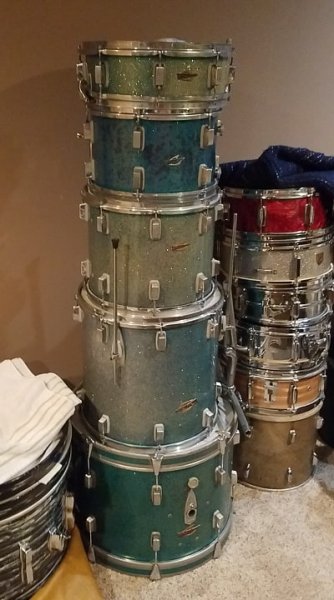 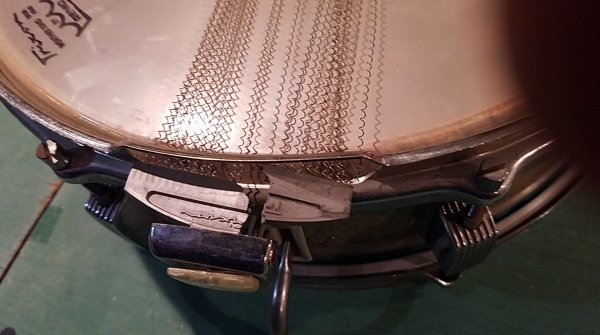 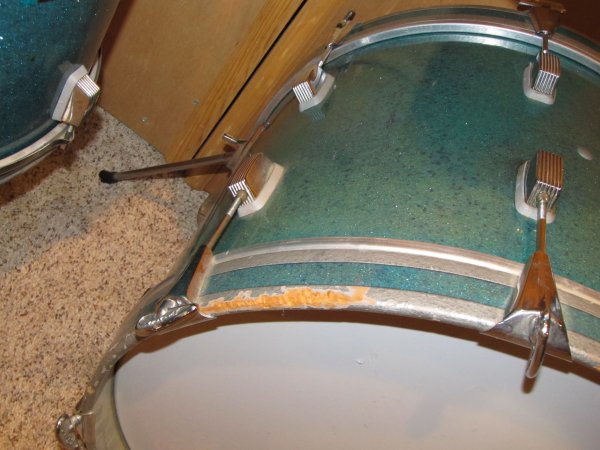 Mid 60s-ish Luxus model 13/14/16/20/5x14 snare for sale. This is not the prettiest set out there, but sure falls in the "never seen one like it at a gig" category. Trixon made some very solid and nice sounding drums. The German engineering on drums of the 1960s is quite different than what I am accustomed to with American drums.

Turquoise glass glitter wrap on each drum faded in its own way. Varying degree of old age spots as well. This is the very hard to find double tom configuration, as almost all of the Luxus sets were single tom 13/16/20 sizes. The snare mechanism works, which is also pretty uncommon. I have lots of pictures and am happy to have you come by to take a look or provide more information. The pictures show the good (rarity, has all its hoops and tension rods and is almost complete - missing some tone controls) and the bad (lots of fade, cracked snare wire end which should be repairable, one bass hoop is a little chewed up) with the set. Like a lot of vintage drums, it is worth more in parts than as a complete set, but I really don't want to be the one who breaks a fifty year old set up. I bought it from the original owner earlier this year and have been finding the few missing parts. Still missing some tone control pieces, but otherwise it is back together.

The double toms are interesting and a little perplexing. The 13 has a different style badge and different tone control knobs than the rest of the set. The tom mount is not branded as Trixon - looks like a Sonor, but is not branded as Sonor either. The shaft diameter of the tom arm for the 13 is smaller than the one for the 14. The original owner did not say that he had added a drum and I have seen the same unusual double tom arm in other pictures of the Trixon double tom setup. There is no cymbal mount like a typical single tom Luxus set would have. And as I said above, it is not the only one around, just the only one I have seen in person.

Ask questions and I will answer them.

Very interesting old kit..Main concern would be if ALL the heads can be fitted with non metric sizes? I see a modern Ludwig, but its usually the toms that can get tricky...I assume beech shells with or without rings, and how are the edges overall?...thx

Any interest? I have a potential trade offer coming from someone local, but do not know what he wants to offer yet. I would rather sell.
W

I,ve always wanted an old Trixon kit, so yes, im interested, but I have to work out shipping to Canada, and exchange on the dollar. It could be a bit much, but I could offer you cash and gear, depending on what you would take?

wayne said:
I,ve always wanted an old Trixon kit, so yes, im interested, but I have to work out shipping to Canada, and exchange on the dollar. It could be a bit much, but I could offer you cash and gear, depending on what you would take?
Click to expand...

I agree that shipping could be expensive. I am open to partial trades, but it would have to be something interesting.
W

OK....So either cymbals,snare drums would be what you refer to?
You must log in or register to reply here.

Ludwig OYSTER BLUE; My "New" Addition To My Old Kit

Staved by the Bell (together at last)