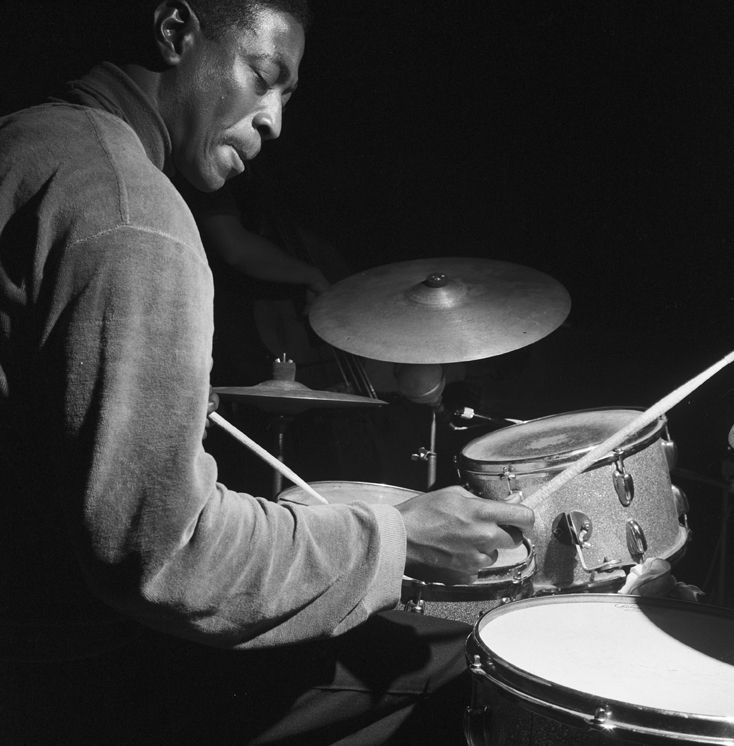 Anyone recognize the rail mount on this kit?
Where's Paul Wells at? Humphries is a PA cat!
Last edited: Dec 11, 2020

Humphries is from Pittsburgh, not Philly.

He played with Silver from 64-66, including on "Song for my Father"

Is that a hoop mount?

I shared a Gig with Roger couple times. I took the first half my drums he took the second half my drums. He had prior gig so couldn't make the start time. Really nice guy.
That looks like a bent old block Lud or Sling holder. or something from the 30s 40s..
And I've heard Roger in a lot of settings- a few- past 20 years (err 30..) or so.. One memorable was a long extended solo he did on the back patio of a bar out in the woods. He must have went on for 20 minutes. He had his (at the time) Midnight Blue old RB Gretsch...and he's a very rudimental drummer- up close- he'll get 'stuck in double and triple paradiddles for like ages almost an old style not Elvin style colorist.
Last edited: Dec 10, 2020

I've seen Roger play at a jazz club in pitt, Con Alma. He still has it!

schwing what did I know..

Great to see a thread about Roger! He was my teacher and mentor throughout high school and beyond. He still alive and well in Pittsburgh, and still plays his ass off!

During his time with Horace Silver, Roger played a Gold Sparkle 1950s Slingerland kit - 12/16/22, and a matching wood snare with a clamshell strainer. He still has these drums, except for the 8x12, which was stolen when he was touring with Ray Charles in the late 60s. I believe that was an old-school hoop mount for the 12. Also, I could be wrong, but I think the bass drum may be a 12x22, but I have yet to confirm this.

Here’s a video of Roger with Horace Silver in 1964, playing the kit in question:

And here’s a recent video of Roger Humphries leading his group in Pittsburgh:

looks like using nylon tips on the Bosphorus..
I tell the story of his nephew Greg Humphries omygawd..
frankly the most exciting non big name- drummer I may have ever seen in a club.
Bosphorus all the drummers in Pittsburgh were suddenly endorsed. (I think they all came from Roger) But when I saw Greg he used a Sabian 22 what was it called Tige- Leopard ride and he Kenny Blake and the keyboard- can't think of his name either- had a weekly gig at a Driving Range. Golf. In the lounge/big room. Those three. Greg, Kenny, and dam can't think of his name on keys. (Craig Davis..; ) I played a few gigs with Craig...when he's on he's on..

Greg Humphries -those three- drove Seven Steps To Heaven into the ground resurrected it turned it back side upside down face up....like I never heard a drummer or a trio do. It was like child's play. it was magnificent am lucky I got to witness it
Last edited: Dec 11, 2020

that's what It was Like Playing with Craig Right Paul?; )\

Yes, Greg Humphries (Roger’s nephew) is also an incredible drummer! I don’t think he plays much these days, unfortunately.

The Bosphorus connection actually came from another Pittsburgh drummer named Janelle Burdell, who is/was an endorser and got Roger and a few others hooked up with them.

Roger has used nylon tip sticks as long as I’ve known him. I remember he used to use Jojo sticks, which was a Regal Tip "seconds" brand. He told me he likes nylon because of its durability.

Speaking of cymbals, Roger also told me that he went to the Zildjian factory in 1966 with Woody Shaw, who helped him pick a set of cymbals. When I first met him, he was still playing this set - 13" hihats (a relatively heavy pair), and a pair of 18s, with the lighter one on his right. Not sure of the other cymbals, but the 18" main ride is a large stamp. He still has these, but always brings his Bosporus cymbals to gigs.

Tom holder appears to be one of these two models from Slingerland depending on whether it is a hoop mount or on that flat rail mounted to the bass drum. 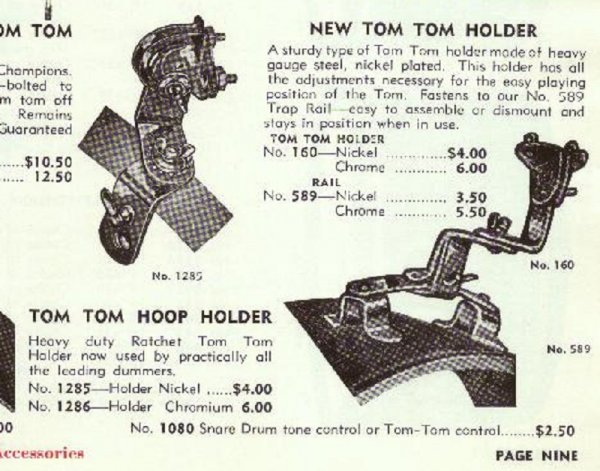 Thursday at 12:04 AM
Stretch Riedle