Another kit from my DFO buddy, El Larry. This one was in pretty good condition just a bit dirty. Original 13/16/22 with clear maple interiors. No dates inside the toms but you can read the Nov. 6 1968 (faded 6) in the bass. I took everything apart down to the springs. Chrome got a warm water Dawn soap bath as did the wrap with a barely damp t-shirt. Kit appears all original down to the washers. The only thing missing was one T-rod on the bass and I had an extra. The rail mount is a block logo Ludwig with teeth on the mechanism (not the holes) - likely a later model. Drums have no extra holes. FT has the short legs. I added 4 lock washers to the rail mount between the nut and round washers for extra hold. The rail has some pitting/rust but that's fine. Otherwise, the only damage to the shells was a small 1" gash near a bass lug that I painted over - I need to touch that up a bit more. It looked like mahogany underneath, though (??). I did refinish the one hoop as they were both battered and I hate that look, but I ran out of black paint! I need to get the 2nd one done, too. All original inlay. I took the staples out, cleaned the inlay, then reapplied with some glue and staples right back into the original holes. Note the before & after hoops.

4 of the claws had bad rust so they are on the bottom. The bass drum cymbal holder is hollow - I need the wing nut/eye bolt and may either have one or a full 1216 mount to swap out. Also, the 13" tom has the non-wing nut bracket - I need to swap that out as I prefer the wing nut. The bearing edges of all drums were near excellent and I only barely filled a few areas of separation on the bass edges. Very clean drums considering they are 50+ years old. I love the creamy look of the drums, too, and they now shine like new drums. I was too lazy to do the Novus cleaning - maybe some day - but they look sweet as is.

I am running coated emperors over clear Ambassadors for a dark deep sound. Bass has a Gretsch PS3-type coated head which I painted over (I don't have a coated 22 at the moment) and I added the Ludwig repro logo (yes, it's the bigger one - but I think it looks fine!). Reso is a Super Kick and I may go to a PS3 clear I have laying around to give it less punch and more vintage tone. These drums sound huge, though, and I can't wait to gig them on the 24th! I have a brass modern Black Beauty behind the kit and I swapped it out last nite for the "matching" Jazz Fest I just refinished, and I was surprised how fat that snare sounded with this big kit. I am totally digging the vintage Ludwig tone and was mostly busting out rock beats and a lot of Bonzo triplets. I tried Morello jazz beats but I guess I really need to tune the toms higher for jazz. Since my gig is rock, pop, blues, Americana and bluegrass, I will keep these tuned in the mid range. I now have 2 vintage Ludwig kits, the other being my "Jazzette" kit from last year! 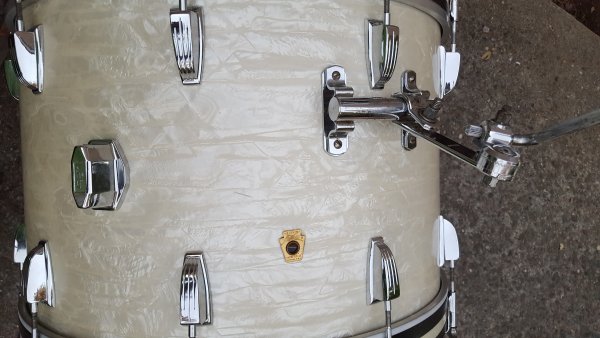 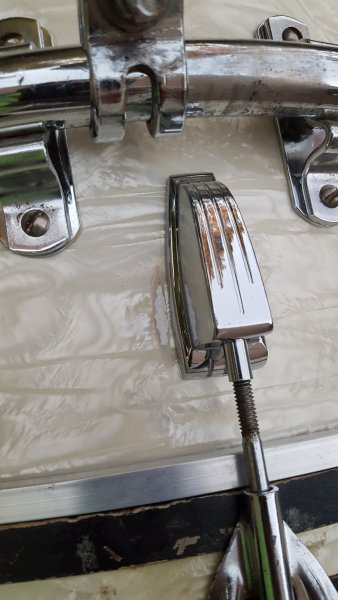 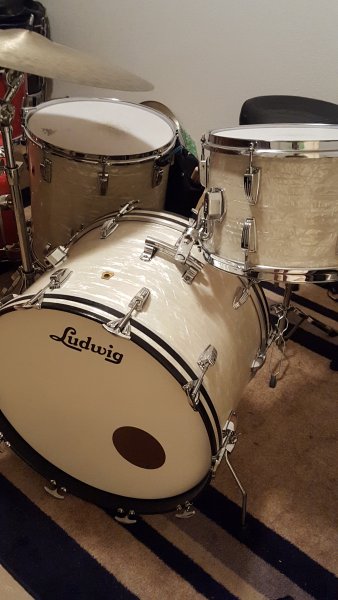 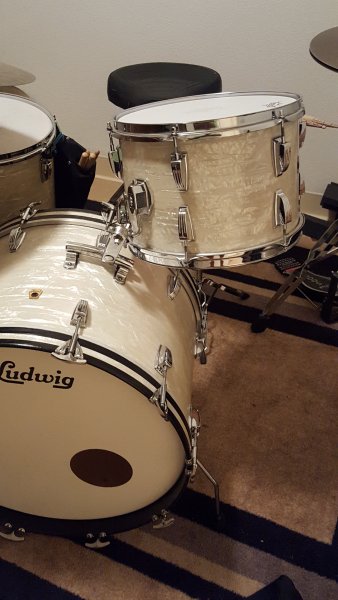 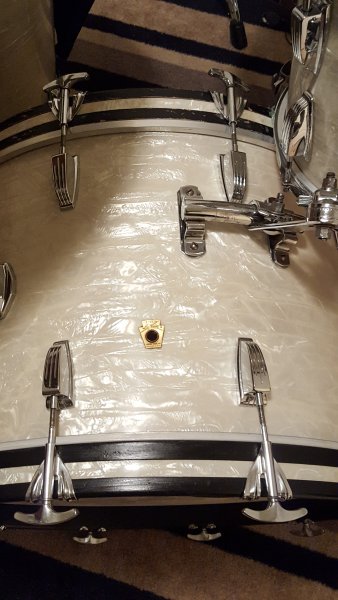 Piper At the Gates of Dawn

That right there--a WMP Super Classic--is the quintessential Ludwig kit; you got a nice one......marko

Thanks. I swapped out the tom bracket for another 1216 with the matching large wingnut and it works like a charm. Just a solid kit with classic vintage Ludwig tone. .....and the "matching" snare is killer!