Hey guys need some advice on how to sell a cymbal and for how much to ask for.

The cymbal in question is a 1976 20 inch thin A crash that I bought new.The cymbal is in great shape cosmetically,no cracks , keyholing or flea bites.No ink stamps,they were cleaned away years ago.Here is the problem,the cymbal has been played out,there is no high end zing left.It spent it's last ten years as a light ride on my niece's kit.I want to get a fair price for it,but I don't want to rip anyone off,or get beaten up on it either.So what do you feel a fair value/ asking price would be?

If it's played out like you say ( i have had two of these) then it is a tough sell. If I had it and was selling with full disclosure...maybe 75 bucks?

$125-200 shipped, make a recording so the buyer can decide for themselves.
K

How thin, do you know the weight? I'm not usually a fan of cleaning cymbals, but it if feels played out (no high end) then maybe a good Brasso scrubbing would do some good towards restoring the highs. I agree with mlayton, $75 as-is, but I would try marketing it for awhile at $75-$100 (make a sound file, even if it's just from a cell phone), then if you don't get any bites in a few months, clean it with Brasso, make a new sound file, and try to sell for $125-$150.

I've bought and sold a bunch of cymbals on eBay, their fees are getting crazy high so I'm going full-on Reverb.

How do you lose "high end" on a piece of metal if it's not physically worn down or doesn't have heavy patina? If it's just the patina, then hit it with groove juice or some other chemical remover to brighten it up. There's also a strong market for dryer fast/thin crashes. Ones you or I think are 'dead'....could very well appeal to someone else. I recently had a brown/black toned 18" BL 18" Paiste 2oo2 med thin that was exceptionally dullish...but those qualities made it a much faster crash than the 1390 gm would have ever suggested....plus being a nice dry light ride....qualities you could never get in this size Paiste if it were brilliant. It was a nice cymbal for light rock and jazz and the new owner liked it as much as I did, despite "looking ugly." If your cymbal is truly a thin crash I'd value it in the $100-$135 range, despite the comments on it lacking high end sizzle. Fast/thin crashes are sort of prized, even dry/dark - and not easy to come by larger than 16-18". Unless there's really deep patina on your cymbal, I wouldn't clean or polish it as it's not likely to help much.

You could advertise it as a "Dry" cymbal . Thin and dry could bring top dolllar!
125 on a good day.
K

I agree Tama CW - I highly suspect it's the patina that's making it sound dead, that's why I suggested Brasso to brighten the tone. But I agree, try to sell it first as a dry (and thin?) cymbal, you never know who might want something like that. I don't think I've ever seen a cymbal that's physically worn down though. In my experience, tonal changes to cymbals are all due to oxidation and patina. (and denting, if that's the case)

Here's one of the cymbals I mentioned earlier. 18" trans stamp paper thin 1160 gm. Light patina. The underside is mostly brilliant. I can't explain why its tones are mostly on the low end. Dark, dry, and a bit dull or clangy. I'd describe it as a China-like ride with a thunder clap for a crash. Lots of wash once near the edge. The bell is small at only 4". It may have been meant as a ride to mix with old K's. It's more like a K than an A. Bright and lively it is not. I've looked closely all over it for cracks with a 5X loupe - and found nothing. Best I can conclude is that it was made this way. It was the crash/secondary ride cymbal in a late 50's jazz kit. 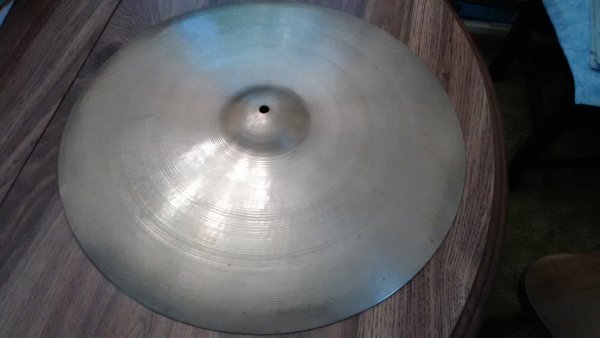 Tama CW said:
How do you lose "high end" on a piece of metal if it's not physically worn down or doesn't have heavy patina?
Click to expand...

See this previous discussion which includes the idea of modelling the sound production of cymbals as a spring. Springs wear out.

Do cymbals really go bad? I have an A Zildjian 21" Mini Cup Ping Ride that's losing it. The after ring/humm is getting to the point that I need something else and it's bothersome to other musicians. It's so old they don't even make them anymore. For years people have said that cymbals get...
www.drumforum.org

and meanwhile I found a source of the cymbals as springs although there may be a prior claim. Thank you Captain.

There are a few older threads kicking around where a not yet detected crack was discovered after suggesting somebody's "played out" cymbal might need careful checking. In some (not all) cases a crack was then discovered.

The 4" bell on your 18" cymbal is relatively uncommon, but not unheard of. The smaller bell will decrease the overtones relative to say a 5" bell other things being equal. The trouble is that other things are never equal. In cymbal design you can't just change one thing (tip of the hat to Garrett Hardin who coined that in his discussions of Ecology). That cymbal also has a relatively low profile which also lowers the perceived pitch. In the profile photo I also see an area of warping which in my limited experience would tend to push the sound towards "China-like" other things being equal.

So far I've only been able to trace a proper Crash model back to the 1960s. Before that there are Paper Thin and Ex. Thin and Thin weight classes, but not Crashes named as such. The situation with the 18" diameter is also complicated by the use of the Special Cup (5.5" and a little taller than the Medium Cup which is 5") which seems to have come in with the 1960s but could still be earlier. The Special Cup was used on Crash and Crash Ride models. The Special Cup may be in earlier use on some models, but not explicitly Crash models.

Do I have the specific trademark that 18" is wearing in my records already? Since there aren't that may small bell 18" or larger diameter cymbals I do like to get full information.

Back to the original question about expected price, all I can add is that all the suggestions so far are in line with historical data for completed sales of A Zildjian cymbals of that diameter and age:

It would be interesting to hear a recording and see photos of the cymbal to improve our understanding of the condition.
Last edited: Jul 4, 2019
M

I appreciate everyone's replies,I think I will post a sound file with the ad and hope someone finds it to their liking,people's taste are all over the map when it comes to cymbals anyway.I also think it could be a nice addition to a mid 70's period collectors vintage kit.

I knew as soon as I wrote that the cymbal was played out that the discussion would turn to whether a cymbal could or couldn't get played out.

For what it's worth this cymbal is clean as a whistle and has no patina at all,no cracks,warping dents or flea bites.I plugged the hole and filled it with water,no leaks or cracks,dried it off and put talcum powder on it,no crack visible,then my niece looked it over with her 20 17 vision,no visible cracks.

I bought this cymbal brand new in March 1976,I was a junior in HS and was in the Jazz band with two other drummers and we rotated our kits monthly,and when I brought in my kit with this cymbal it had a ton of that new A Zil high end zing,so much that we didn't use it with the Jazz band.When I brought it back 6 months later it had settled/aged in nicely and sounded fine with the Jazz band.It still had plenty of high end,but had smoothed out and turned into a great crash that I used for the next 15 years.After that I used it occasionally til the mid nineties when I started using it in a classic rock band,and I noticed that I started to have to hit it harder and harder to get any high end on it,till eventually there was no high end left. I know some of you don't believe that a cymbal can get played out but as the only owner of this cymbal since it was brand new this is the only explanation I can think of.
G

Have you noticed any changes to your hearing over the years? Any shifts shown in the results of audiograms, if you've had any?

Kind of being half smarty pants and half serious.

I don't know anything about cymbals being played out so this is new and interesting to me.

Need to hear this one to get a firm grip. Cell phone is fine. light wood tip stick

Now having run across 3 thin candidates over the past few months for being "played out," maybe this is what happened. All are over 60 yrs old. One would think the thins and paper thins would be the most susceptible to losing their spring as Zenstat has suggested. For a cymbal that is little played this shouldn't happen. For cymbals owned by busy drummers who gigged for decades, it just might be the case. Something I had never considered before. If someone has such a deadish candidate in a medium weight, that would be impressive.

Could have went the other way- may explain a bot used 70s 16 I have- all highs
played out would be the excuse yet I wasn't there when it was new
Springs are hard to pin down
I had an old drummer explain it to me once he said his cymbal (big 22 A CR) went to all highs
don't assume played out goes one way. Instead of sizzle. Can go .. fizzle.
Last edited: Jul 5, 2019
You must log in or register to reply here.
Share:
Facebook Twitter Reddit Pinterest Tumblr WhatsApp Email Link