Seb77 said:
Looks like the same bell as on the crash ride and large crashes, not sure if it was the "large" or "special" one. Makes sense since it was conceived as a (pair) crash cymbal.
Click to expand...

Special Cup if decades of history is anything to go by.

The Large Cup was developed in the early 1970s for the Rock21 which came out in 1973. It's a Norwell thing. I have not yet seen a Large Cup on any older cymbal. I have followed the Special Cup back to the late 40s. It might be a post WW2 thing. I have been able to pick up at least two different Special Cup dies in use which lead to slight shape differences. One of those shape variations is the flatter top bell associated with the mid 50s block stamps (aka L1 aka Large Stamp Type 1). There could be more than two dies. We don't know how long a cupping die lasts before it needs to be replaced.

foxy_shazamtastic said:
Those cymbals are awesome. Have you played one?
I meant the volcano cup, hybrid trash smash
Click to expand...

Yes. The K Hybrid Trash Smash- the 19"- Yes. Was the best sounding cymbal in a GC couple years back. Sounded like a True K. I like them-looked into buying one. It also has those perforated strips coming down like..well you know. Yes. I like them. Plus the ashtray is built-in.
Last edited: Oct 19, 2021
A

I have the 20” Avedis orchestral, and it’s a great cymbal. It’s a very sweet (only slight complexity) sound with a good bell. Mine looks just like this one. Brilliant finish on top. So if you like big cymbals, I imagine the 24” could be a nice one.

Well Zildjian nailed it with this ride. It'll be taking my 24" K Lights spot for the time being. It's almost like a 24" Sweet ride with a tad bit better ping. Uploading a video now

Surprisingly to me, this one is indeed darker than my 24" K light. It's a much more full ride sound vs the trashy, smokey, airy sound I get from the K.

They are both wonderful, but for now the Orchestral is definitely gonna take the show.

Sounds good. Which fat hats you get?

bassanddrum84 said:
Sounds good. Which fat hats you get?
Click to expand...

I haven't pulled the trigger on those, but I'm loving the 15s. I like my 15" K Sweet top over Avedis bottom though, so I may just keep them.

Can't wait to try this ride with the band and kit

aparker2005 said:
I haven't pulled the trigger on those, but I'm loving the 15s. I like my 15" K Sweet top over Avedis bottom though, so I may just keep them.

Can't wait to try this ride with the band and kit
Click to expand...

I agree the 15s sound killer. Try and get some video of ya playing with the band with that ride.
A

Don’t sell the K Light though. You will regret it… Keep both if possible

That’s a no for me. I’m sure it’ll make some guy’s happy.

It seems to have some of that low end growl of the K Light but with a brighter/metallic ping on top, opposed the more woody stick of the K… It has its sound for sure, don’t know that I can ever find love for the brilliant finish, but that’s just my personal aesthetics issue!

…those 15 fat hats sound divine, those’ll be popular I think!

AtlantaDrumGuy said:
Don’t sell the K Light though. You will regret it… Keep both if possible
Click to expand...

Definitely not selling it. It's been my workhorse since I got it!

I’m still very happy with my redesigned 24 A Medium, but this is nonetheless tempting.
K

That's really nice sounding! Have fun with it!

It's cool (IMO) that it doesn't have "the hook" downward toward the end.
That feature on a lot of Zildjians cymbals really affected the sound into something I didn't want.
My older cymbals (anything pre-'00) don't have that edge downturn--where if you run your fingers across the final 4" or so, and feel a pronounced dip in the angle.
I'm not sure why they ever made that change to the design of the A series.

I've got 2, 22" A ZMAC cymbals from sometime in the 80's that don't have that dip and they sound great.
Fantastic crash that isn't gongy, and riding and the bells are sweet sounding.
I tried to get some 20" ZMAC around 2000, and the shop ordered 3 sets. They ALL were super heavy, and probably ROCK weighted.
Just awful, and VERY disappointing.
They were NOTHING like what ZMAC were intended to be--band/orchestra/marching for schools to get the most for their money.

I remember Paul Francis being in an 80's Zildjian video as a factory worker.

The 21" A Sweet Rides I got a couple years ago are also closer to my original 21" Sweet Ride, so they must have done some redesigning back to what their cymbals used to be like.
Maybe they'll bring back the 20" Swish.....

It sounds close to my 24” K Con proto, but I still like mine more. 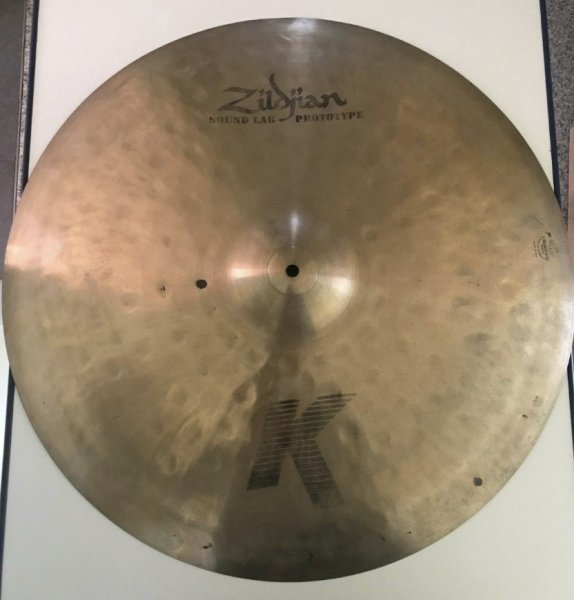 A much better review than mine, but I agree with everything he says!

When you see a crowd, go the other way. I've been playing an 18" uptown ride as my main ride for over a year. Mine is darker than most uptown versions you hear (thank you Gerry Porter) The combination of the dry sound with the small diameter forces you TO LISTEN to what you're playing. I feel that my jazz ride sound has vastly improved simply by consistently playing this ride. I couldn't play a 24 if it landed in my lap for free!

MaskingApathy said:
Whoever this new guy is in the video, he's certainly no Paul Francis.
Click to expand...

Joe Pallai is not Paul, but he does REALLY know his stuff and is making great cymbals. His personality and style is much different, but give him a chance - you'll dig him!
You must log in or register to reply here.