Has anyone tried both of these kits?
What is the difference in sound? I assume the wood-fiberglass shells are warmer and not as loud. However, I know Blakey played a Pearl all fiberglass shells in the 70’s-80’s for his Jazz stuff. Some of these kits I have heard on youtube really sing. Any feedback is appreciated.
Last edited: Oct 27, 2021

I was a huge fan when these first came out. About 20+ years ago, even put together a double bass 10pc concert tom set. Still have a 22” and a double lug 12”
They aren’t light, the wood ones are even heavier. I’ve played a wood one but not owned one. Warmer? Natural muted sound by comparison is how I would describe it. All fiberglass can do the same depending on heads and tuning but I’d think wood couldn’t be as versatile in the long run.

My first kit was a 1976 Pearl Wood-Fiberglass kit. I played it for nearly 15 years before selling it and getting out of drumming for a few years.
When I decided to play again it never entered my mind to find the same kit. Years later that non-decision was only reaffirmed when I played the exact same kit that had been purchased in the same week, from the same shop, by a childhood friend. Same kit and year just white rather than black finish.
The drums sounded exactly like my original kit, and was equally uninspiring. It wasn’t a bad kit by any means and one would think the nostalgia of hearing that kit for a decade and a half would have sparked some romance.
But nope. Nearly every decent quality kit I’ve played since spoke to me more so than the Pearl wood-fiberglass.
I was even excited when Pearl reissued those drums a few years ago. But upon hearing the demos it was the same unexpected reaction. I just felt they sounded bland.
I still find this strange as I am both a gear nut and a nostalgia-holic. But I never felt any attachment to them despite having an almost unhealthy attachment to some of my current drums. Go figure. 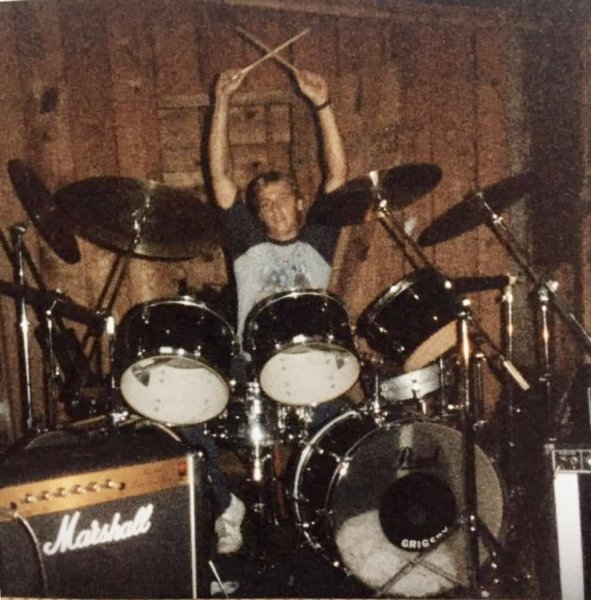 Wood fiberglass are more focused and drier . Naturally eq'd with the heavily textured interiors . They record nicely with minimal foozling . 9 nine ply luan with a thick resin coating will favour the mids in tuning .

The considerably thinner shells of the pure fiberglass have a deep bottom end rumble and growl .

I had both in my 1977 special order Pearl kit. If I could go back in time, knowing what I know now, I would have gone all fiberglass.

FWIW-I have a 14" w/fg shell I'm not using if anyone needs/wants it!
H

I’ve had both; I played the W/F more, I’m still slowly cleaning up a fiberglass -