I've had this shell for probably 2-3 years sitting in it's box waiting for me to get to it: 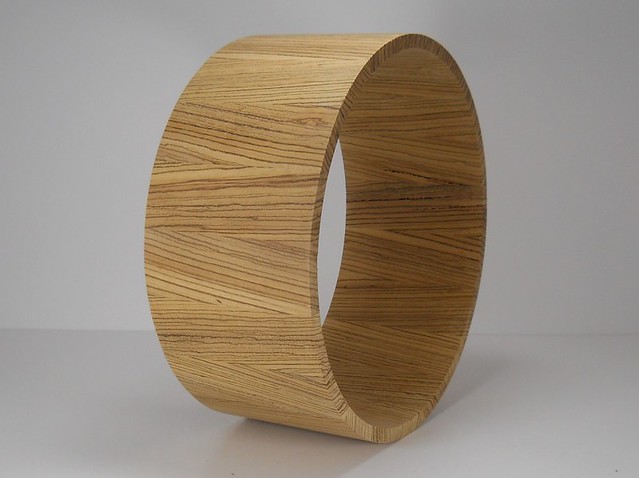 Finally got around to working on it. So far I have thinned the shell to 3/8" thickness, routed out an inlay groove and installed the inlay: 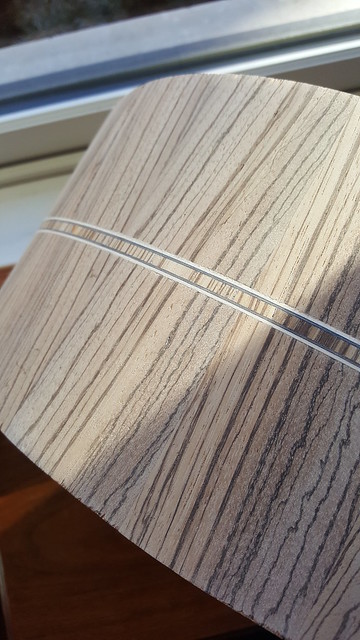 I'm still sorting out how I want to finish the shell. First thought was to just do a simple oil based finish and leave it kind of natural, but now I'm thinking about doing an epoxy grain fill and build up a gloss finish. I want the shell to have a nice pop, but sometimes a high gloss can distract from the grain so I'm not sure.
Last edited: Mar 4, 2019

I want to say I saw a recent post that said a less high-gloss finish is better to bring out the wood grain and/or showcase it.........

What a beautiful start to a drum!

*What do you use to thin the shell? Lathe? Router? Other?

*Did you construct that lovely inlay yourself, or is it pre-fabbed?

Looking forward to seeing the progress on this one. (And a deep, glossy finish is wonderful and expensive-looking. Please go gloss!)

For thinning shells I use my router and a sled/jig I built that allows me to rotate the shell while the router slides through the middle of the shell: 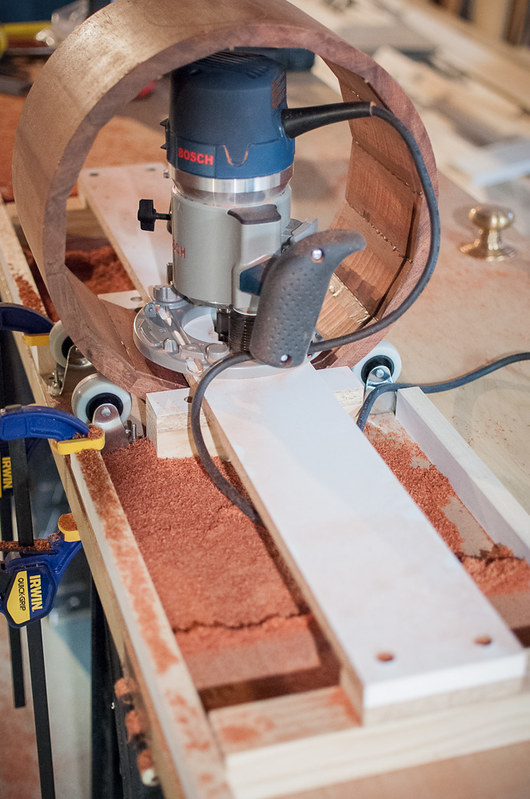 For this shell, however, it was ~1/16" out of perfect round and using that sled would lead to an inaccurate thickness all the way around the shell as the drum bobs up and down with its slightly oblong shape. Some areas would be thicker than others and that will lead to poor bearing edge form. You can't have that on a drum and expect it to tune up well. So, instead I picked up a rabbeting bit and a bearing that was 1/16" smaller than the total diameter of the router bit. I then used a collet extension on my router and jammed that sucker up as high as I could go on my router table. It put the bit a little above 3" above the deck of the table. From there I ran it through the inside of the shell cutting a continuous 1/16" depth out of the shell. I don't recommend just anyone do what I did, as collet extensions can be dangerous to use, but it worked for this particular shell. It took A LOT of sanding to smooth out all the little ridges from the various passes I made with the rabbeting bit, but it turned out good and it's a uniform thickness around the shell.

The inlay is prefab. I'm not that skilled. I did have to use that collet extension again, and another rabbeting bit, to cut the inlay groove as I didn't trust I could get a clean cut around the shell if I built some sort of horizontally mounted router jig. Plus, Zebrawood is notorious for "tear out" if you take off too much at a time. I wanted to make several small passes cutting just a hair at a time to have a clean sharp edge. It turned out pretty good for my first try, but I'm sure there are things I could have done to make it even better.
L

You will be OK with a gloss finish... not a stave but same wood. 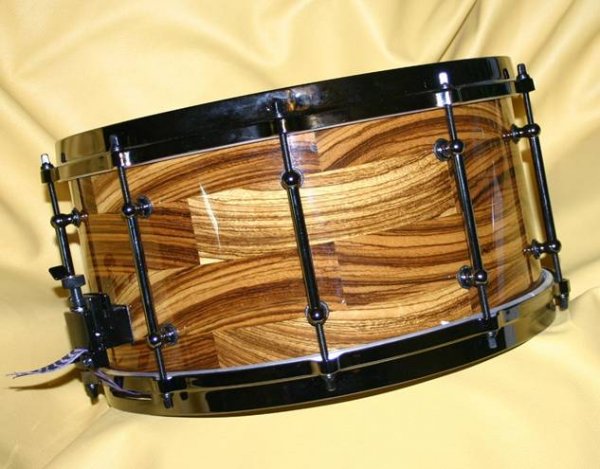 man I can't wait to see what you do for hardware!
Killer snare so far!

spazapproved said:
man I can't wait to see what you do for hardware!
Killer snare so far!
Click to expand...

I'm using black nickle GN tube lugs, a RCK strainer and butt and stick saver hoops. A part of me wants to do a burst finish on the drum to incorporate the hardware in to the design a bit better. I've never done a burst before. Then again, I've never done an inlay before either...

Just one more thing to think about.

Really cool project! I will be watching this one.

Same here, this is going to be stunning! Nice work on that inlay for sure!
A

Nice work! I tried to do an inlay cut on a shell and botched it! Now I have to wrap it. And please, no burst. That wood is to pretty to mess with.

Nice work Tommy. The inlay is a classy touch

Yep, it's your shell. I'm finally getting around to working on it, but my time is still pretty limited so it may take me a while to finish it.

Tommy D said:
Yep, it's your shell. I'm finally getting around to working on it, but my time is still pretty limited so it may take me a while to finish it.
Click to expand...

latzanimal said:
You will be OK with a gloss finish... not a stave but same wood.

That is one of the nicest looking shells I've ever seen.
L

REF said:
That is one of the nicest looking shells I've ever seen.
Click to expand...

Thank you... back to Tommy

That's a stunning shell Tommy, nice work. A rubbed tung oil finish has my vote.
You must log in or register to reply here.

Couldn't wait to play along and then...

T
What Is This? (Rogers Inner Sticker) *SOLVED*