A few months ago I purchased this NOS Sonor bassdrum. 8 lugs, 9ply, 45 degree bearing edges and a mysterious green inside/outside stain. Technically somewhere between Champion and Phonic. The vendor couldn`t provide any substantial information about this drum.

Now a similar floortom is offered here. The vendor also has a stripped 9ply bassdrum shell in green stain but with round bearing edges. This formerly had a round tom mount attached, mine has the "boat" mount.

Very interesting, these drums appear to be a special series I can`t find in any of the old catalogues. 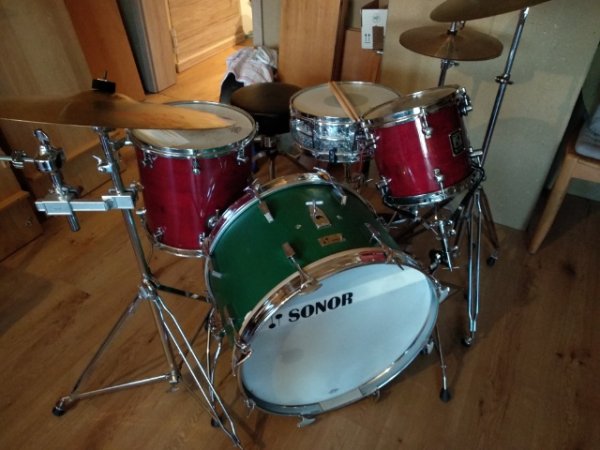 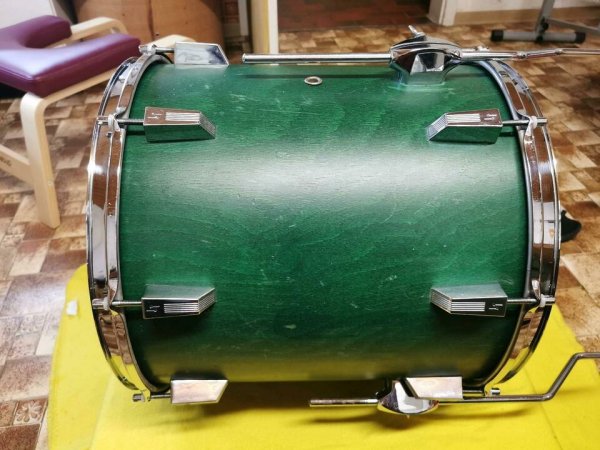 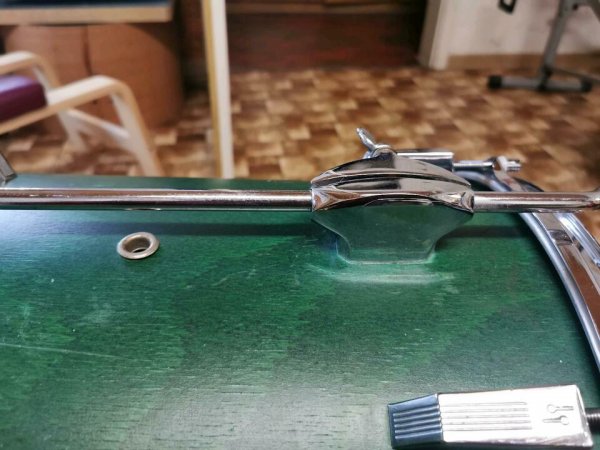 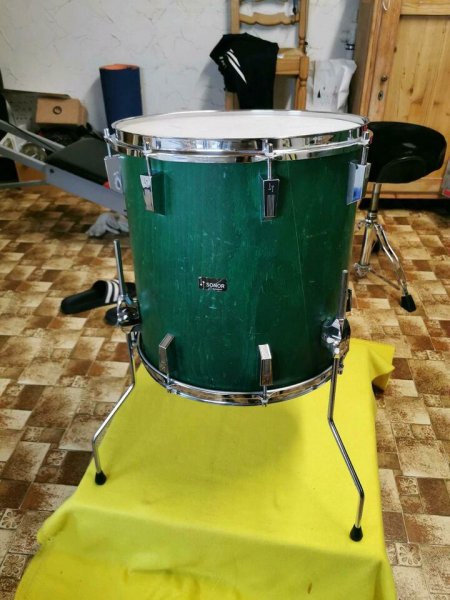 The FT looks like a mid-1970's Champion, though the badge is from the Swinger series (the hole spacing on the plastic Swinger lugs will not match those of the Champion/Phonic series). The green stain appears amateurish in its application. We can see glue blotches, and the vent grommet is loose, facts that strongly suggest that someone stripped it and applied green stain perhaps in the hopes of making it "match" the bass drum.

The photo of the bass drum doesn't show enough detail for me to guess at whether it's a factory finish or if it was done by someone else, but if the bass drum is 20", with eight lugs, and is 9-ply, then it is most likely a Phonic, if it's a 22, then it could be a Champion, which had eight lugs (a 22" "Super Champion" had ten). It being a Champion doesn't explain why it's 9-ply but Sonor did retain the "boat" tom mount mount bracket into the Phonic era - even after they had previously switched to the oval-shaped tom mount bracket for the Champion/Super Champion.

Also, what appears to be a white felt pad at the bottom of the front bass drum hoop makes me think that the hoop is supposed to be on the batter side (unless of course, the other hoop also has the same thing stuck to the bottom).

Sonor catalogs are often unreliable for dating or authenticating certain features like hardware and finishes, as they published only three catalogs in the 1970's while in the intervening years certain features for each series changed. That said, below is a Champion kit (p 8, 1975 Sonor Catalog) with an 8-lug 22" bass drum. Below that is a Phonic with the "boat" plate installed (p 4, 1979 catalog).

Interesting. I used to share a rehearsal space with someone who had a 90's Sonic Plus kit in a very similar finish. Obviously a different era, but perhaps Sonor reused it across different lines?

You can see an example here.
You must log in or register to reply here.

Want to strip lacquer on Tom then stain to match my set. What is the process?