Anyone Actually Play an Old A Zildjian Ride?

Ptrick said:
Nothing records like my 50’s 24” old A medium I keep down at the studio. I bring other rides, and they never track as well. Looks like somebody got high before they drilled rivet holes, but sounds great! View attachment 430817
Click to expand...

They must've contracted the Ludwig badge hole borer for that rivet hole job. I love it.
C

Yessir.
I have two: 20 medium weight with rivets, and the one pictured below, my favorite of the two, which is an early 60’s 20 incher around 1845 grams with some funky warm patina. 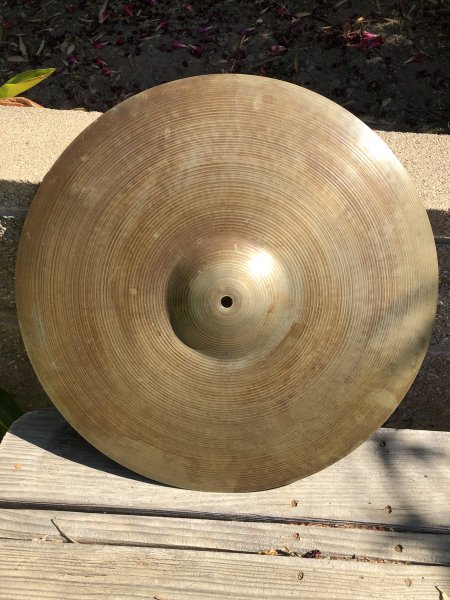 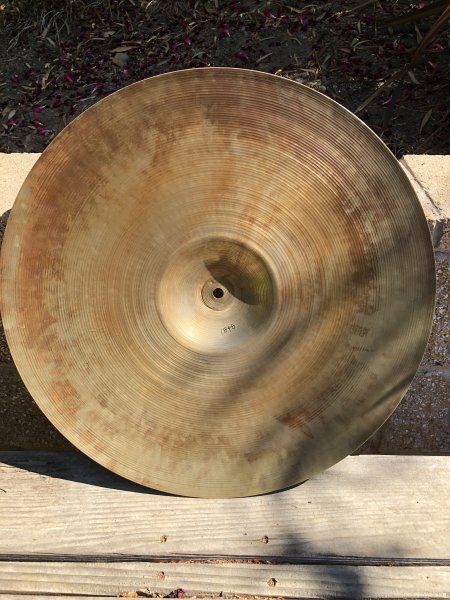 Perhaps more in crash weight range, but it really works well as a lower volume rehearsal ride or a crash/ left-side ride on stage. It now goes to 98% of my gigs and is, I think, responsible for changing my playing style to one of more judicious crashing, which has helped the evolution of my musicianship greatly.
A

Yes I do, but I have a mixture of rides that I’ll use. Some modern Ks, some vintage As, and old Ks.

Everyone should have one old A. At least. Kind of a ground zero. Plus, if you’re playing a retro thing, it’s more fitting.

What diameter are we talking? A 20" at that weight would likely crash nicely while maintaining stick clarity for riding. Good choice for jazz too.
S

jsp210 said:
What diameter are we talking? A 20" at that weight would likely crash nicely while maintaining stick clarity for riding. Good choice for jazz too.
Click to expand...

Here's one. This has a large bell and higher curvature, so there's quite a bit volume. With the right stick/touch you could use it for low volume such as piano trio, too, but I prefer a lighter one, maybe with smaller bell, for this.
https://soundcloud.com/seb234%2Fbig-band-play-along-for-2

No, I just keep a few around to keep Zen busy...

I'm one of those guys always advocating for buying "Old A Rides" and practice what I preach.

These are my two favorites, both 20"s, the one on the right being my current "go to" ride. It weighs 2157 grams and has a beautiful crash, clear bell and medium amount of spread/wash. The one on the left weighs about the same and sounds great too, but I gravitate toward the one on the right because I play the bell a lot on my gig. I have a couple more old 20" As I use from time to time.

I'd love to find a modern A Zildjian I love as much and "support the home team" but for me, you can't beat an "Old A" if you find the magic one(s) and there are plenty of them out there.

My other favorite "go to" is a 20" white label original Giant Beat weighing about 1980 grams, which has many of same qualities and characteristics as my favorite old A Zildjian. Great crash, nice bell (not as clear and articulate as the A Zildjian) and a little more wash. But drummers have asked me about it at gigs, assuming it's an old A because it sounds so warm. Anyway, didn't mean to digress from the Old A conversation... 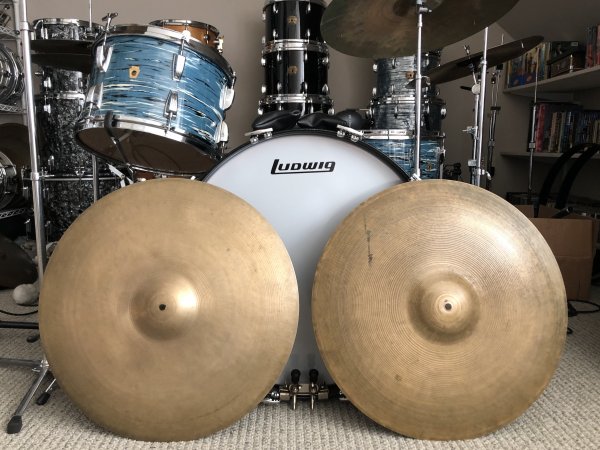 I have a late 50s 20" 2087g A Zildjian that I bought in 2011 for $80. At the time I was bashing high-volume surf music with 5B nylon sticks and just wanted something with a lot of wash. I quit using it in 2018 and had considered selling it. I now play low volume music with much more finesse and lighter sticks and decided to try it on some gigs. It is a completely different cymbal than I thought it was and has a rare sweet sound when played as it was likely intended to be played. I now bring it to every gig as a LSR (actually to the right of my main ride, a pre-serial Paiste 602, 2233g).

General consensus - almost everyone on this forum has or has had a 50's, 60's or 70's Zildjian A Ride lol

I do. Sometimes more than one. Like when my band was playing around with some real heavy riffs a few months ago, and I landed on this setup to match the tuned down guitars and the general vibe of the material: 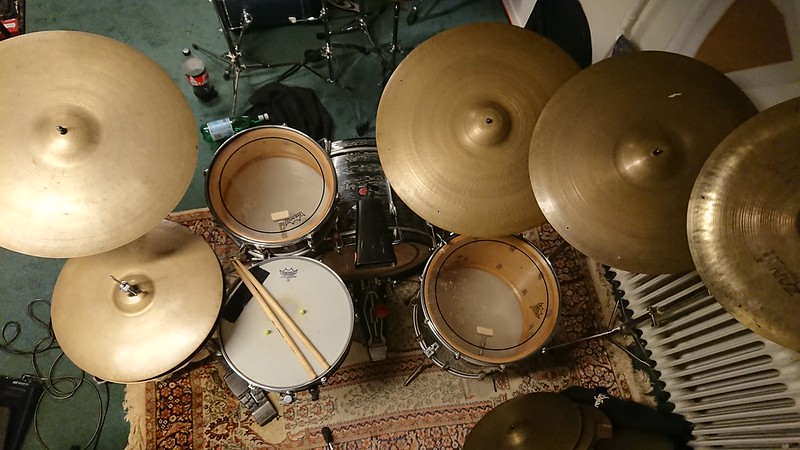 I've been playing the same block stamp 20" since 1984, have never found anything better, not even a better block stamp. I use mostly old A Zildjians. I like everything though, at least until the music starts, that's when I think A's sound best to me as they never get lost in the overall sound, and help me keep the time when the s*it is hitting the fan.

I know there are other cymbals that cut well, but I feel like the A's have a very musical sound at all volumes, they don't change character as you play them soft and loud. I like that.

I do have some old stamp K's, and they're wonderful, but I use the A's more. If I have anything really loud to do, like a ton of dancers, I love the A Customs, and also, easy to get.

Anyway, I'm one of the guys who always recommends getting old A's....... and I'm always playing them.

I once brought in an Old A to Pro Drum Shop and compared it against all the high end models they had in stock. I came away thinking there really is no other cymbal model that exactly compares to the Old A sound, though some come close. If that's the sound you're seeking, there's no easier way to get it than to go to the source.

I have a 20" heavy AZ ride -2900 gms . No screened designation . Not quite a ping and not quite ' rock ride' either . Just heavy, but in a nice musical way . I traded it to a fellow who actually had the original sales receipt ( Dec 1970)from Sam's ABC Music here in Ottawa . I rarely use it , but it's good to know it's there if I want to .

I was in Eugene, OR at Sam Adato’s drum shop a couple days ago, and he has a SWEET thin 22” trans stamp. Smokey, jazzy, awesome. Good thing it wasn’t payday.

Anyone else see the recently posted Memphis Drum Shop video of John Riley playing Joe Morello's Take Five 20" A ride? Somehow I think we place too much reverence on such things. I bet Joe did what I did (and you all did) and walked into a drum shop and hit a few with some sticks and walked out with the one he liked best and didnt pay a lot (relatively speaking) for it and got lucky that Time Out is the icon it is.

The original has something deeper and more special going on , to me .
C

Ptrick said:
I was in Eugene, OR at Sam Adato’s drum shop a couple days ago, and he has a SWEET thin 22” trans stamp. Smokey, jazzy, awesome. Good thing it wasn’t payday.
Click to expand...

I miss Sam’s shop in San Francisco. Bought my 20 K from him.
B 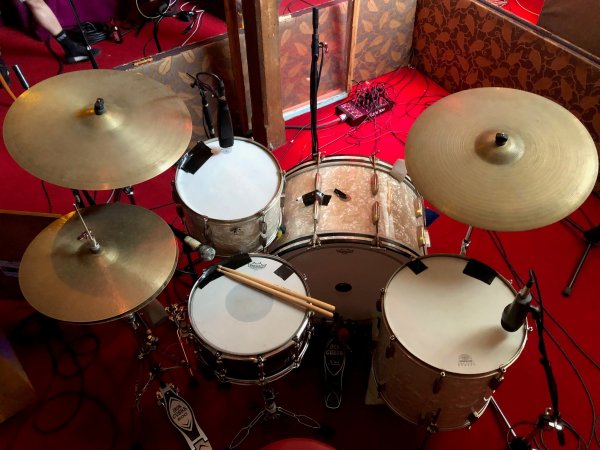 I have been through four different old 22" Zildjian A rides (mostly 60's 70's) trying to find 'the one'. Quite a few of these are clangy to my ears. They ride great, but not much for crashing. It can be hard to find any below 2800 grams.
20 inch A's are much easier to find a nice sounding and light and crashable one. I've had a 2045 gram 20 that I should have never sold.
All in, can't beat the prices of an old A.

Thing is, I don’t think I have $1200 into ALL of them, not even factoring profit turned when I sold.

I’m a 602/Paiste man (though as I’ve said a thousand times here, I think Paiste used good late 50’s/early 60’s A’s as their benchmark), but the bang for the buck of a set of Zildjians is just astonishing.

I know Acros aren’t everybody’s cup of tea, but if you budget $1000 for an Acro and a bunch of Old A’s, and never buy another snare or cymbal again, you’re shopping smarter and sounding as good or better than I am from the word “GO”
You must log in or register to reply here.

Glad I changed my mind on selling this one......boy that would of been bad.

K
I have Gone Full Circle on Bass Drum Pedals. Here's my Truth