Anyone Remove a Couple Center Snare Wires to Reduce Buzz?

I've got a snare buzz problem, and please don't tell me to re-tune or loosen the lugs at the ends. Been there and done that. I've got the buzz under control now by taping a couple small pieces of light cardboard underneath the ends of the snare wires, but this reduces the sensitivity of the snare drum a lot. It's not an ideal solution.

Today I stumbled across this recommendation from Sweetwater for reducing snare buzz.

But I have no idea whether or how well it works. Mostly, it looks like the main "innovation" is simply to remove a few snare wires from the center. If this helps, it occurred to me that I could just clip a couple wires out of my existing snares to get the same effect, try that, and maybe clip four center wires out and try that if removing two doesn't help. (I have 20 snare wires now.) Has anyone tried this? I'd hate to ruin a set of snares by experimenting this way, but if the Puresound Equalizer works, it would seem that a person could easily make something similar out of any snares by just removing center wires.
F

I’ve done it, it reduces snare buzz and warms up the snare sound for sure.

Yes, one of my favorite sets is a 24 strand where I cut out the middle 8 wires. It’s dryer when I strike the middle point of the head, yet crispy when I play around the edge. It does reduce buzz. Make sure to pry the cut wire ends away from facing the head, to keep those ends from damaging the reso head.

"Equalizer" wires really do work! The first drum is a "Frankenstein" players drum, built with a Rogers SuperTen shell. The wires had some bad strands in the middle, so I cut out enough so they'd be like the Puresound wires. The drum sounded great!

The next drum was built from a 14" Yamaha tom, cut down to a 4.5" depth. I experimented with different heads and wires and nothing sounded good...until I installed a set of Puresound Equalizer wires I had in my stash. What a fantastic drum after that!

Many snare drums not only dictate what heads sound best, but also what wires turn it from a "so-so" drum to "I can't believe how great it sounds"!

bongomania said:
Make sure to pry the cut wire ends away from facing the head, to keep those ends from damaging the reso head.
Click to expand...

Yep. Cut the wires from the middle first and bend both ends down/away from the reso head, then snip them from the end plates. This should make sure you don't have any sharp ends scratching your reso head.

Usually the buzz is from a slightly stretched out wire. You can see if any of them are stretched by taking the snares off and laying them on a flat surface. The stretched ones should be easy to see.
Last edited: Jul 20, 2019

reminds me of the Premier 2000 parallel snare, that had 2- 12 strands with a space between
O

JDA said:
reminds me of the Premier 2000 parallel snare, that had 2- 12 strands with a space between
Click to expand...

Wow. Between the mid-70's and about 15 years ago when I sold off my equipment, I played a Premier snare. I can't say that I ever loved that snare, but it never gave me any problems with buzz or anything else, so I had no desire to replace it. Now that my Gretsch Catalina snare is giving me problems, I'm finding myself missing my old Premier snare. More practically, I'm trying to remember what was different about the Premier. Unfortunately, I don't remember, but on the back of my mind has been the faint recollection that it might have had a gap between the wires. I do remember that the whole snare housing was a little different, seemingly more heavy duty, but I didn't pay close attention to the construction of the Premier snare. It just worked and I played it. Now I'm wishing I could remember what exactly was different on that Premier snare.

It was a parallel system; snares under constant tension; just 'brought' up and down by a hex flobeam latch system that ran thru the drum. 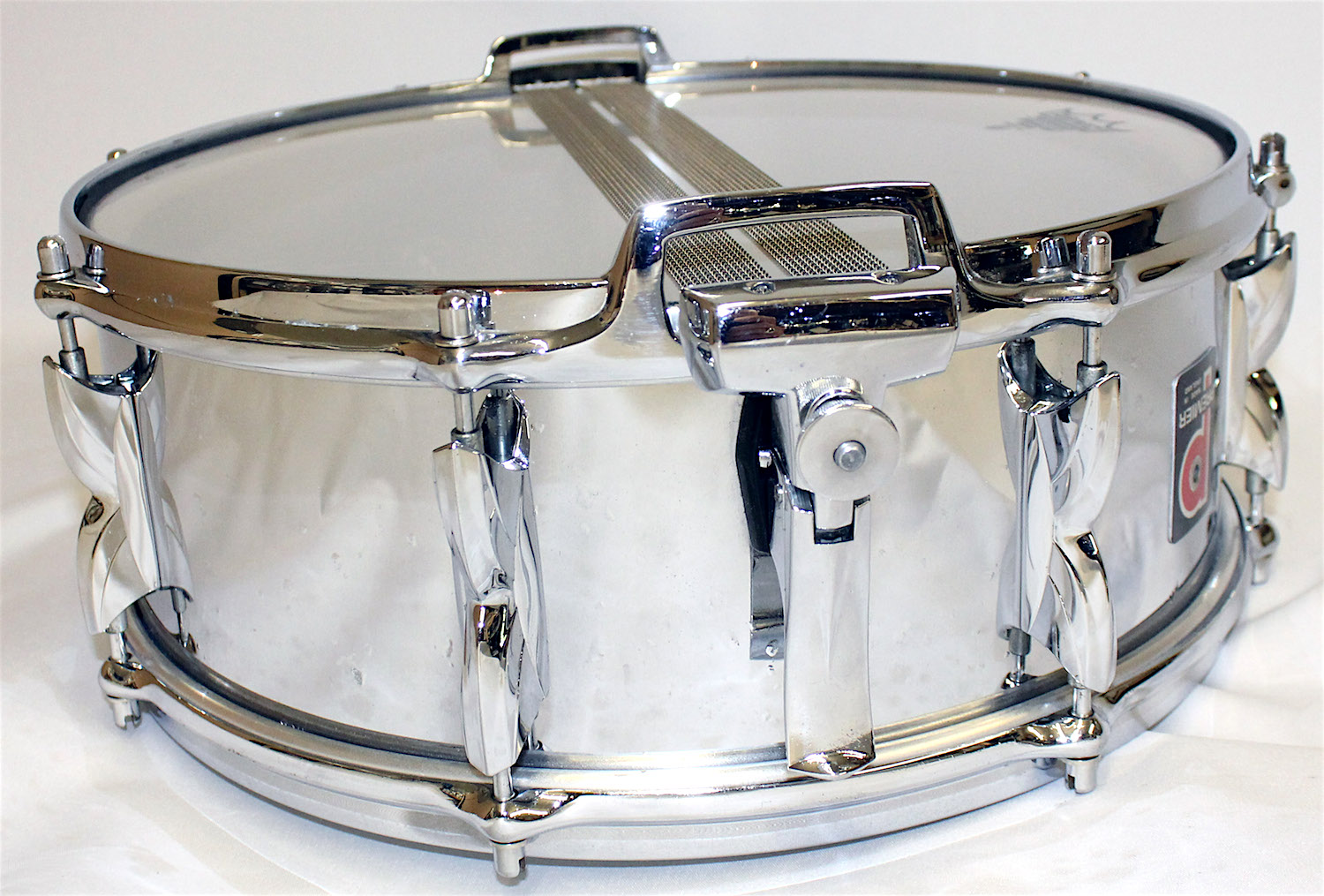 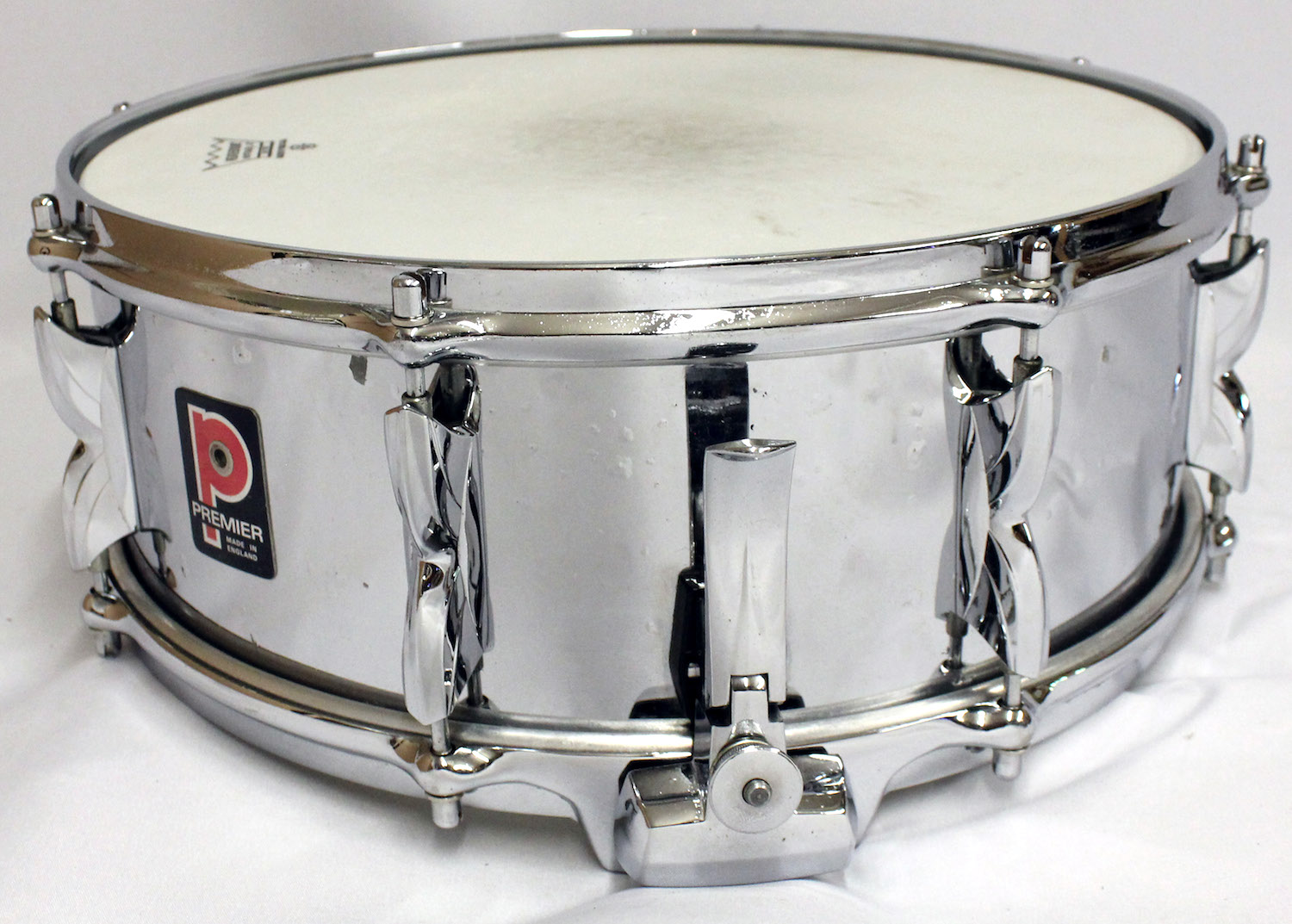 The 2000 snare drum was introduced by Premier around 1966 with it gaining its debut in the 1968 catalogue. Although Premier had other metal shell snare drums on the market this model became iconic for both its design and its sound. The 2000 features a single spun metal shell, with no bead...
mikedolbear.com 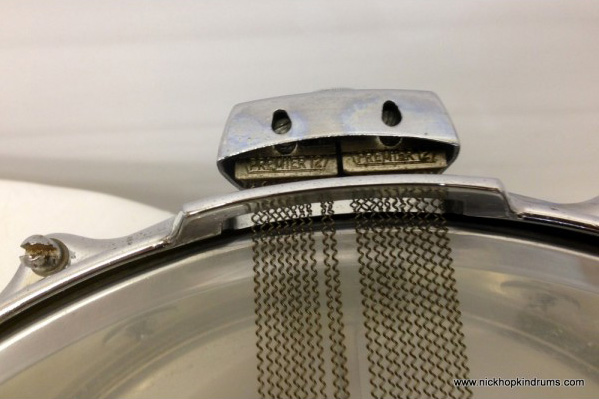 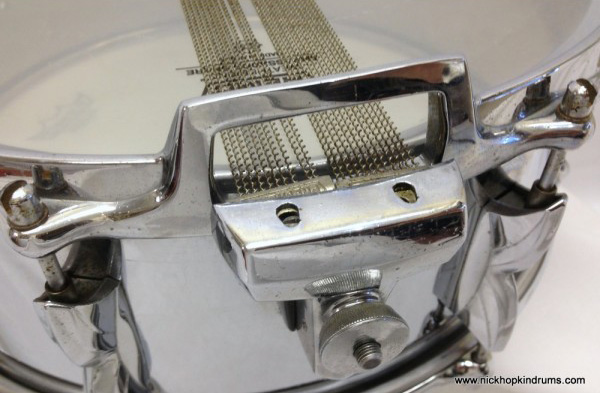 The gap in the wires will help, but the only surefire way to reduce/eliminate the sympathetic buzz is by tuning the snare higher than the offending tom (or the tom lower than the snare), or by position the tom a bit differently or further/higher. Even adjusting the tilt of the tom a bit can help a lot.
O

JDA said:
It was a parallel system; snares under constant tension; just 'brought' up and down by a hex flobeam latch system that ran thru the drum.

The 2000 snare drum was introduced by Premier around 1966 with it gaining its debut in the 1968 catalogue. Although Premier had other metal shell snare drums on the market this model became iconic for both its design and its sound. The 2000 features a single spun metal shell, with no bead...
mikedolbear.com

Yep, this is the snare I had, and I really think mine had the space in the middle of the snare wires. I wonder how much "later" no space was introduced. I'd guess I bought my snare in 1975 and know it had the Premier screwdriver tension lugs, which the article says were changed to the standard square ones in the late 70's.

Now I wonder why nobody seems to be copying this design. Maybe they are and I'm not aware of it, but I do know that this Premier snare worked well for me--no snare buzz or any other annoyances.

Noble and Cooley Cam Action snares will solve this problem. No snare buzz! They have a unique mounting system that allows you to tighten up the snares without choking the drum and still get a great response. Best snares ever invented.

They only work with snare cord, and installation takes a bit of fiddling. You tie knots in the cords on the snares, and thread the loop end into the strainer and butt. Sounds weird, but it works great.

I got rid of my sympathetic tom buzz by using them.

This method worked for me.

Old Drummer said:
I wonder why nobody seems to be copying this design.
Click to expand...

Ludwig's Super Sensitive system was similar, and has also been discontinued. I was a huge fan of both Premier's and Ludwig's. Closest thing now is the Rogers Dynasonic I think.
N

OP doesn't want to hear it but I tune out snare buzz. I get my toms in the range and intervals I want. If a certain tom causes buzz I tweak the snare. (which is higher tensioned than my 8" tom but lower than my side snare) I always start with the snare side head and usually raise the tension a bit to get it out of a sympathetic harmony with whatever is exciting it. This works well. There will always be some sympathetic snare buzz but it can be minimized to almost nothing.

Cutting the middle kills the snap. It’s the bed that is the cause.

Obiwandrumobe said:
Cutting the middle kills the snap. It’s the bed that is the cause.
Click to expand...

Disagree on both counts.

bongomania said:
Disagree on both counts.
Click to expand...

Hey if you can present some evidence to back up your claims then we can do something other than give our humble opinions.

I didn’t say you were out of line, I just said I disagree.