Are pub/bar gigs back yet in your area ?

No consistent live music for over a year now up here in Canuckistan. There was a brief period early last summer where you could have some limited live music, but only outdoors, a limited number of people, and no dancing was allowedYep it was Footloose in real life here.

Since December it’s been pretty much stay home or else. No eat in restaurants, in-store shopping only for essentials. We’ve been seeing life As somewhat normal down south and are envious. I want to play again, go to a restaurant, see a hockey or baseball game, pick up what I need at Home Depot without having to order it online and pick it up 3 days later.

I’m a team player but just getting restless. Hopefully we will start opening things up a bit in the coming months. I’m afraid this has broken up a lot of bands and killed many live venues.

Even tho the band is covered.....the audience isn't. They (the audience) can go inside but then it kind of doesn't make sense so we'll see.
I'd be surprised if the band sets up inside (it would be 1st time in oh...18 months? 24 months?.)

So many businesses have closed (for good.
Family restaurants, Repair shops, gone.
where there was once 3 of either in a 5 mile radius there is now 1.
Last edited: May 29, 2021

We had a few scattered gigs last summer but they started coming back to a regular schedule around October. Now back to normal and just in tonight from a full house gig. The band leader handed us a list of about 15 additional gigs upcoming. The biggest issue right now is lack of Canadians since we could normally count on 4 to 6 monthly bookings for private clubs and RV parks...hopefully that will be coming back.

Yep. I’ve got several lined up in the coming weeks.

Gigs started late last year here in Australia. I started early January. Was meant to play twice twice weekend but the state of Victoria went into a seven day lockdown starting Friday. I was really hanging to play a kit I just bought back. These bad boys 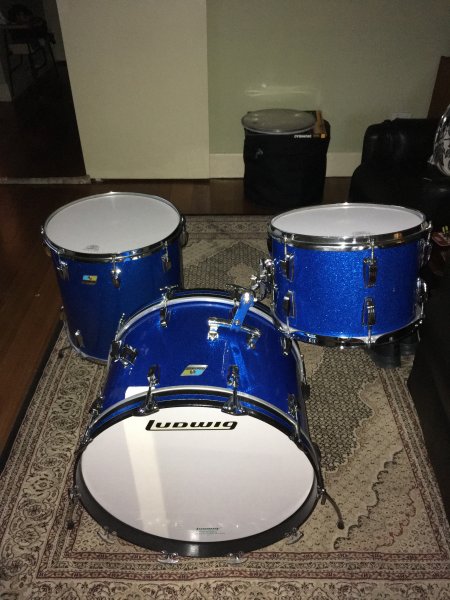 Outdoor shows have been happening in MN. Did my first couple this month. I’ve booked a couple indoor things in July.

Our show last night was packed. Great energy from the audience. Everyone is ready to go. Our singer and I have been playing duo gigs for a while but we're finally starting to fill the calendar for full band gigs.

Our dear province of Quebec Canada have been one of the strictest in the country, restrictions-wise, since march 2020... Since then I've made a few TV gigs, a few webcasts, maybe 3 shows of my singer-songwriter trio in 1/3 capacity, distanced venues. My cajun band did 1 outdoors concert last august (restricted to 250 inside the perimeter but about 7-800 more watched from outside the roped area, we were lucky the police didn't show up.) now things are slowly openning back up but won't be up to speed until September.

So Cal:
About 75% of our regular pubs/bars that had live music pre-COVID are back to it, with more coming back on line every week. Depending on their location and the ability to host gigs “outside” (and believe me some of these “tents” were as nice as the indoor set-ups), some barely even stopped.

michaelg said:
Just wondering if anyone is back to work doing gigs yet anywhere ?
Click to expand...

Well, gigs are coming back in my area in upstate NY but I see that some places that use to offer a certain guaranteed paid amount plus a tip jar are now saying because of the bad past year they can only offer tips for the band or maybe half guarantee pay and tips. Some bands won’t do it and others are doing it. As a result, bands that are four pieces or more suffer the most financial so you see duos or trios doing ok since they can probably end up with $75- $100. per man. I was booking a five piece band for years getting decent money and now some of the same clubs are only offering what I had mentioned, ( example $200 for a whole band plus tips or no guarantee pay and just tips) As a result some of the guys in the band won’t do any gigs and go book themselves as a trio or a single. It makes it impossible to book the band and it shows that some guys don’t care about getting through this together until it gets better. As the bass player told me, it’s all about the money and first come first serve when it comes to gigs. I have decided to break up the five piece band.

I was out on Broadway in Nashville last Saturday night — every floor of every bar I passed had a band playing. Jam packed with people.

Dtucci said:
So Cal:
About 75% of our regular pubs/bars that had live music pre-COVID are back to it, with more coming back on line every week. Depending on their location and the ability to host gigs “outside” (and believe me some of these “tents” were as nice as the indoor set-ups), some barely even stopped.
Click to expand...

Hey Dtucci, I noticed your Inde kit…was that a wayfarer kit? How do you like it?

I'm not but plenty of opportunities in Chicago suburb bars. Many went unplugged per say and we saw an increase in opportunities for solo guitar acts and duos. I imagine some will stick and others will get rolling with a full band again.

We are all booked up for the rest of the year pretty much! People seem so hungry for places to go that our phone has rang everyday looking to book us for something! It feels good to have gigs to look forward too.

This has been our busiest year so far and that doesn't include an album launch!

itsjjp said:
I'm not but plenty of opportunities in Chicago suburb bars. Many went unplugged per say and we saw an increase in opportunities for solo guitar acts and duos. I imagine some will stick and others will get rolling with a full band again.
Click to expand...

I've done three full band gigs in the past two months, with a ton already on the books for the rest of the summer. I actually bowed out of a few, just to get a rest. Sadly I enjoyed NOT gigging for the nine months, getting to old and crotchety for late nights, and hauling crap around.

I'm in Canada. Daddy and Mommy say we're not allowed to go outside and play yet.

There were some gigs locally, advertised only to non-snitches, over the past year and a half. A local biker bar had a few big gigs. The city/county shut down his first one, and I don't know what he said to them (I do, but I can't type it out here) but they left him alone after that. A few other venues never shut down either. Otherwise, the neighboring counties let people keep playing, so there was no change for them.
I've been hearing/seeing bands play for several months in this county, or at least a dude or two with guitars performing. I don't think karaoke ever stopped either.

There's never been a real lockdown except up in the Phoenix and Tucson metro areas. They're open and have been for a while. Besides, nothing really happens in central and southern Arizona at this time because the 120's degree heat is just around the corner. It's already in the 100's. Our summers are May through half of November. No such thing as a winter here. The summer's heat is our lockdown every year. And being that those two areas are Pac-12 university cities off for the summer, it's pretty much Dead's Ville. Satan's just started to move in his lawn furniture. Across the border in Mexico is where all the killer gigs are at. Lots of high-end parties by high-end Americans are held there. No restrictions on booze and dope. 12 year-olds smoking pot and drinking with their parents aren't a problem down there. Everything goes. Cover bands do real good there. I mean they do real good down there.
Last edited: Jun 1, 2021
You must log in or register to reply here.
Share:
Facebook Twitter Reddit Pinterest Tumblr WhatsApp Email Share Link