Are YOU the best musician in your band? 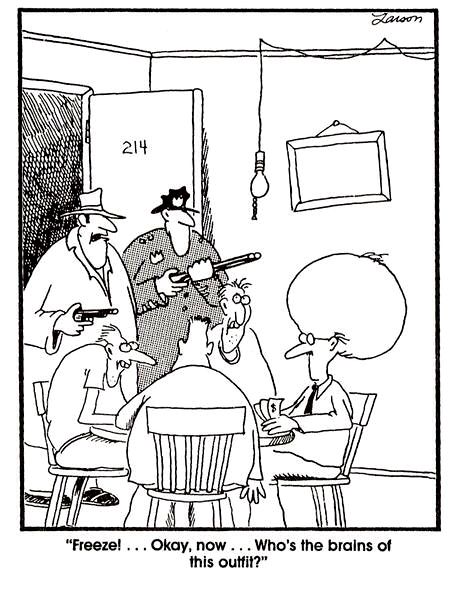 Who's the brains of this outfit? | Far side cartoons, Far side comics, The far side gallery

This Pin was discovered by . Discover (and save!) your own Pins on Pinterest.

Not even close. Our Keys/Guitarist (who also plays Drums and Bass) is classically trained and has been a continually gigging and session musician for 40 years. Our bass player is phenomenal, but needs me to "count" for him. Our Lead Guitarist is amazing, but is too circumspect to realize how good he really is. I am, however, the best singer in my band. (don't tell our Singer).

I feel blessed, and unworthy of the talent around me. We've been together for 8 years, and I am constantly amazed every time we rehearse, or play out together.

Actually, in one of my bands, yes. I actually hate to say it but it is what it is. My other band, no way!

Mcjnic said:
I can’t imagine artistic greatness resulting from one who puts himself above any of the musicians he’s traveling through the creative process with.
One of the more important ingredients in the soup of artisan integrity is a healthy dose of humbleness.
Click to expand...

Mcjnic said:
I can’t imagine artistic greatness resulting from one who puts himself above any of the musicians he’s traveling through the creative process with. One of the more important ingredients in the soup of artisan integrity is a healthy dose of humbleness.
Click to expand...

Ha!
Buddy Rich, Prince, and a hundred other successful (and demanding) bandleaders have proven your theory has no merit whatsoever.

Sure, it probably looks better to appear 'humble' - but it's not essential to 'artistic greatness'
C

Hell, I'm not even the best drummer.
S

I prefer for all of us to be on about the same level, just each person can "specialize" on their instrument--when I feel (or know) I'm the best of the bunch it puts too much pressure on me to make sure everything is running smoothly. I don't want be responsible for telling the singer that the harmonies are off or the bass player is in the wrong key. They should ALREADY know what they are doing, as should I. On the flip side I don't need/want anyone telling me how to do MY job

The few times I have been the best musician in the band, the band was always pretty crappy. When I was in very good bands, there were always musicians better than I.

Depends, If we play blues,I'm ahead of them,of funk and county. But rock music they are way ahead of me

EvEnStEvEn said:
Ha!
your theory has no merit whatsoever.
Click to expand...

Wow ... just a bit over the top on that one.
no problem
We are allowed to have differing opinions.
It’s all good.
Drummers see life differently and that allows us to appreciate and approach the groove differently.
That is a very cool thing.

Nope. I’m damn good, but my band mates are fantastic.

I’m fortunate to play with cats who have more technique and theory than I do, but appreciate my craftsman approach. I excel at giving a pop song exactly what it needs and they love me for it.
C

My answer is NO. Although over the years I have forgotten more about music than most of the band leaders I've encountered.

FUNNY STORY: After playing 25 years of Big Band style I reverted back to playing Country and Western music. A first gig with a local band, the leader turned to the bass man and said, 4/4. I played 4 on the floor as he did, the second song he turned and said, 2/4. I started playing a polka style beat...NOPE!! WRONG! LOL At that time I realized he wanted us to ply on 1 and 3. So I had to get into/learn a new mind thought in a new world.

I've played in bands with mixed players with good and better musicians but really enjoy playing when everyone knocks it out and I'm trying my best to keep up. Now, that is a real rush.

I consider myself lucky to be able to play with one of the best bass players in Austin. He's a master musician and teaches music as well, plus, a really nice guy. He and I have become good friends and I have to stay on my toes trying to keep up. I think the only reason he keeps me around is he likes my style.

We don't have to be the best in the band but we should never forget to keep playing the best we can. Continuing to work on OUR chops is OUR responsibility.

In the Elvis project I now play in, I am the best musician in the band and I don't like it and get frustrated. I'm 66 now and I don't have my pick of working bands like I used to when I was younger, so I have quit and rejoined the band 3 times in the past 12 months because of the inept bass player that couldn't groove and no pocket. I basically played with the rhythm guitar player.......The short story is they finally fired him, so I came back. We'll see.......
C

VintageUSA said:
All five of us are at about the same level.....................not the greatest, but far better than competent.
I'm the only one in the band with a degree in music but the other guys have worked hard in bands all their lives to get to a greater level.
We have one guitar player who (arguably) could be better than the rest of us but, his laziness takes over.
Click to expand...

You are to be complimented Sir, to the fact that you can recognize that in others.

I'm the baldest in the group.

Not even close in my band. Our lead trumpet player is exceptional and well versed in several different instruments. He also played with some very influential people back in his younger days, before taking over the family insurance and real estate business.
The same goes for our piano player. Of course it helps that he is a high School music teacher.
O

Currently I'm only playing in weekly jams, so of course the other players are all over the place. However, if I exclude the obvious amateurs, the rest of the players strike me as similar in musicianship to those I played with in myriad bands in my younger years. In fact, there's a cluster of us old guys who darn near have our own band at the jams. At least everyone from the house band except the bass player leaves the stage and turns it over to us.

It has never occurred to me to judge my band mates by overall musicianship, or to compare theirs to mine. What I have consistently found and still find is that the other players have both strengths and weaknesses. A guitarist in our current jam band, for example, is a real pro. He's retired now, but made his living playing guitar full time, and played in some well-known bands. However, he doesn't sing as well as he thinks he does, delays the upbeats too long in some songs, and tried to play a song in 3/4 that's in 4/4. I don't mention any of this to him, since hey we're just old guys having fun, but he has his weaknesses. Another singer-guitarist is obviously an amateur, who probably mostly played at home or at parties, but he's got a nice style and can front a band well. He'd be worth his cut if we put together a real band. And both of these guys remind me of zillions of others I've played with over the years, all of whom have had strengths and weaknesses.

And speaking about myself, I'd say that I have way more weaknesses than strengths, especially nowadays, but remarkably nobody seems to notice my weaknesses, or at least they don't mention them. Heck, I'm regarded as a good drummer (despite abundant evidence to the contrary). My guess is that I'm seasoned enough to recover fast from mistakes and smart enough not to try anything complicated enough to really screw up, plus can figure out songs fast without having heard them before. Fortunately, I can't hear chord screw ups directly, but if they persist (as once happened recently) I can tell that something's wrong. Mostly I try to do my part, let others do their best, and in fact even regard my part as trying to bring the best out of the other players. They seem to appreciate that, and the other night the keyboard player hugged me, I gather in appreciation for the way I tried to work with his leads, but I'm not a great drummer or a good musician. I just have some strengths and more weaknesses, but that's my opinion of others I play with too.

I have found that over time playing in the same band with the same other players, the weaknesses of some of the players start to grate on others to the point where action is taken. I have never been in a band where any player has been kicked out by the others, and never been kicked out of a band myself. But I have been in lots of bands that reconfigured after awhile, leaving some members out of the new band. I was even once left out of a reconfigured band myself, which I suppose was the practical equivalent of being kicked out, and although I don't believe that was the main rationale for reconfiguring the band, I do suspect that my weaknesses as a drummer started to grate on a couple of my band mates. However, I didn't judge them to be without weaknesses too.

Anyway, I find the level of musicianship of different players to be a mixed bag, and while some are better all-around musicians than others, I've never emphasized this. Instead I look at what contribution the band needs a player in that role to make and assess whether or not they make that contribution. If they're doing the part needed, I don't care if they're weak in other areas, though they do have to be strong in the role the band needs from them. Indeed, the best all-around musicians may be worthless in a band if they can't contribute the one thing the band needs them to contribute well.
You must log in or register to reply here.
Share:
Facebook Twitter Reddit Pinterest Tumblr WhatsApp Email Link