These look really cool. Out of my price range, and I would have to play it.

m_anderson said:
These look really cool. Out of my price range, and I would have to play it.

agree. Would love one of those A's but would mount on the wall and stare at it....that's not what it was meant to do. Also for that price the wife could have 2 designer handbags !!!!!!

Anyone seen one of these up close to see what stamps are on them? From the lathing in the video one would expect large stamps, trans stamps, and possibly even 2nd stamps.
The one stamp shown in the video is either a mid-50s large stamp (LS2 with 3 dots) or a 1960's stamp. Can't tell the size from the video. For $2000 I surely wouldn't want an early 60's A.
But Mr. Francis in the video says they have smaller bell holes....hence pre-1958 or so. With 100 vintage "limited editions" coming out each year....could take about 100 yrs to empty the vintage Zildjian vaults. ???
Last edited: Jul 12, 2021

I went to my local shop the other day and just out of curiosity I asked if they had any older As. They proceeded to walk me over to the drum head shelves and pointed to a case on the very very top of the shelves. Im 6’1’’ and the case was barely in reach. But for a lot of people it is out of reach. And not everyone even appreciates Old As. I didnt see it or play it because right away they said it was $2000 bucks. They tell me its from Armands personal collection 20” inch ride only 100 released yadda yadda. Im like, “Ok wait, so is it an Old A or an Old K??” Its an old A. I didnt wanna be rude and ask them, but a few questions came to mind…

$2000 bucks for a dang 20” Vintage A??? This better give me the EXACT Take Five cymbal sound. Shouldnt a similar cymbal, assuming its in good shape and good sound, cost around $300? Why tf would Armand keep 100 cymbals that look barely played if these cymbals sounded so good? Call me a pessimist but isnt technically anything unsold in the back recesses of the Zildjian factory could be considered “Armands Collection”? Even the big name drummers dont have 100 super extra special coveted cymbals. They use the 1 good one till it dies.

There are no good quality sound checks of one of these cymbals on YT.

Anyways, im a Z boy but i feel like people are being bamboozled and this is just a stunt…

Also, handling a vintage A with gloves seems just silly to me 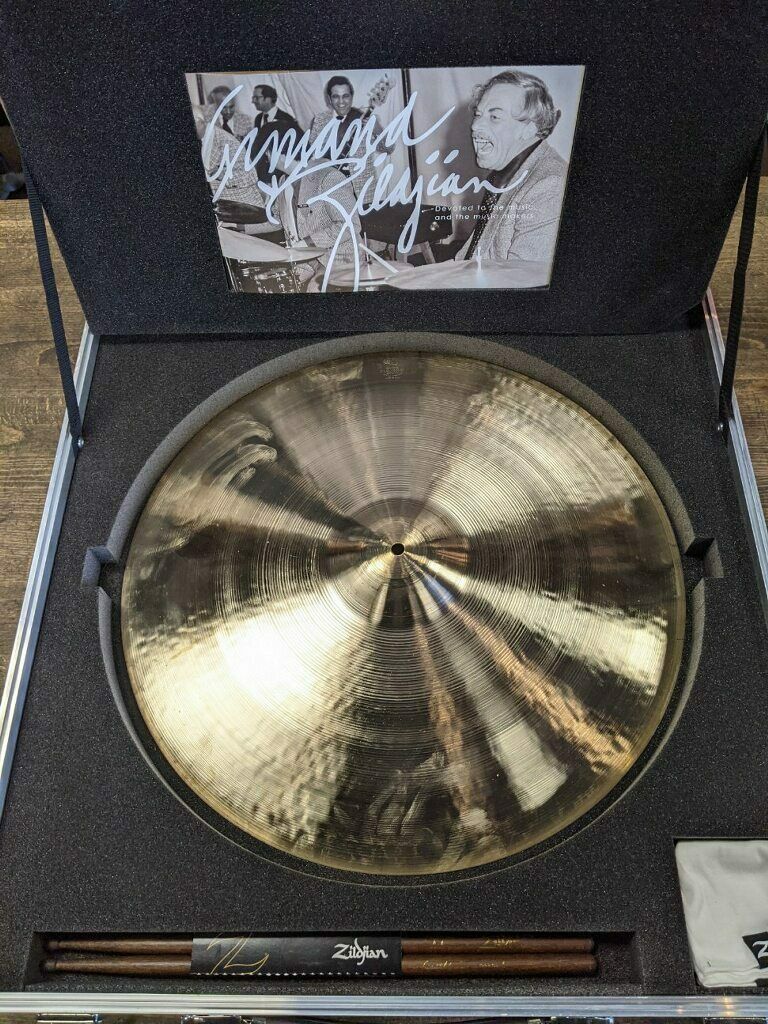 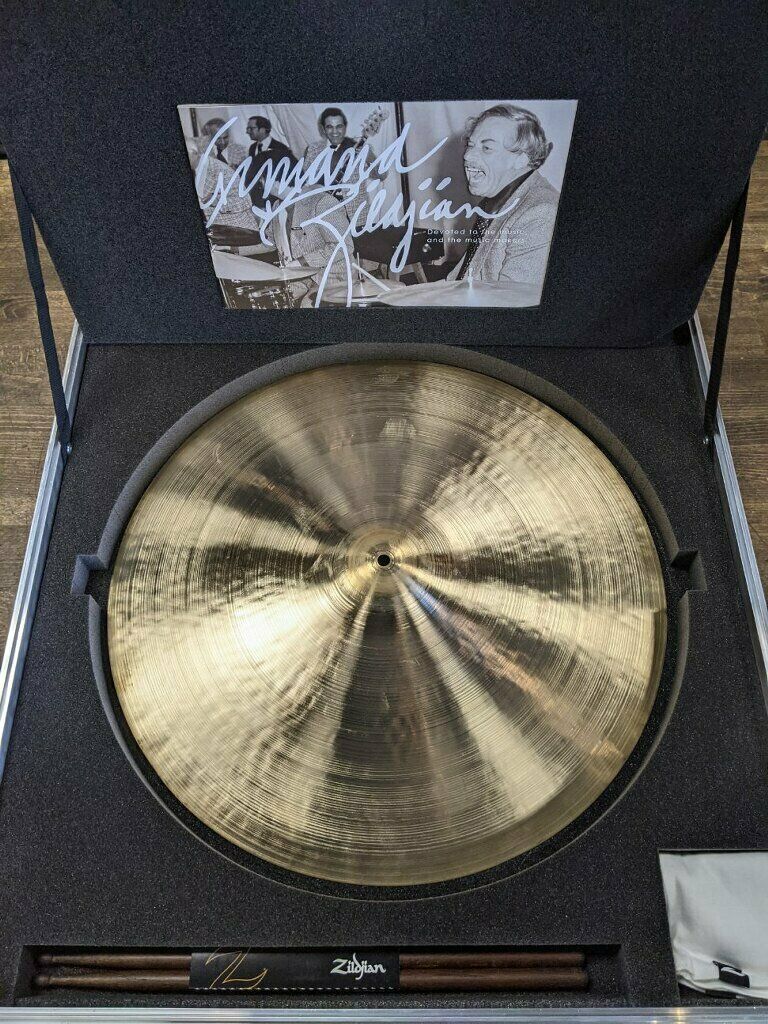 In celebration of what would have been Armand Zildjian's 100th birthday, the Avedis Zildjian Company is excited to announce, that for the first time ever, it will be releasing vintage cymbals from the Zildjian family vault.

In celebration of what would have been Armand Zildjian's 100th birthday, the Avedis Zildjian Company is excited to announce, that for the first time ever, it will be releasing vintage cymbals from the Zildjian family vault.

Ya i researched that much before posting. Theres still no good audio of the cymbal. Would you buy it if you had $2000?

I will pass on that deal.

When I worked R&D at Z, Craigie did allow Paul and Leon C., on a special request, to pick through this small vault off the side of the Drummers Lounge. I was in there with them when they were picking through 14s to make a special set of hats for a top endorser. There’s many, many thousands of cymbals in this vault, and the reason they ended up that way was that most weren’t A-stock…. So, over time they just got pushed to the back of the row when cymbal orders were picked. (This is in no way to be construed that of the 200 examples Z picked recently are flawed soundwise or cosmetically… there was plenty of good stock in the vault, and that these recently release examples were undoubtedly vetted).

What is fascinating about these examples is that some were old enough to have hay (which was used as packing material way back when…) oxidized impressions outlined on them. They were pre .500 through hole, which I believe was incorporated 1962-63. Cymbals weren’t stamped until they were picked for orders and the Testers had the stamp rollers on the the Test room (so this does blow up a lot of “precious” timelines folks have out there about stamps... because of the nature of how the inventory was stored and revolved). The cup, hammering and especially lathing are best indicator on date/era of manufacture.

But the most fascinating thing about these cymbals was they are proof that metallurgically speaking, the bronze “sweetened” and opened up over time. You can hear that distinctly in these time-capsuled, unplayed examples. Some that might have been so-so or “bad” when new, but all had now a distinct prettiness that came with the long aging.

I recently picked up a Take Five ride from DFO. I’m very happy with it. Last saw one for $200 on GC Used.

I believe the original Take Five weighed 2192g. My repro is about 30g less and sounds pretty darn close.
A

Better off investing $2K! But still cool. Or get a vintage K.

VinSparkle said:
I recently picked up a Take Five ride from DFO. I’m very happy with it. Last saw one for $200 on GC Used.

I believe the original Take Five weighed 2192g. My repro is about 30g less and sounds pretty darn close.
Click to expand... 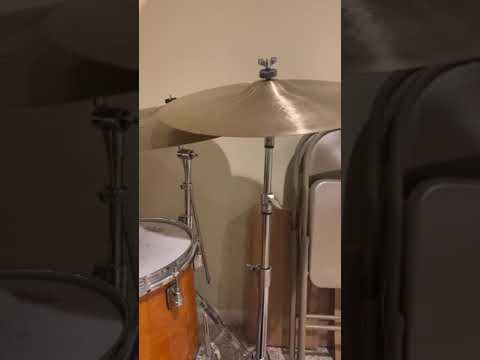 VinSparkle said:
Here’s my crap attempt at the Take Five groove with my Take Five Ride

youtube.com
[/QUOTE!
That one sounds great! I've really been enjoying mine @ 2222g.
Click to expand...

Anyone here buy that 20" old K that Steve Maxwell just had up on Reverb?

Today at 4:01 AM
Imperial Star