goodcat1337 said:
Awesome, I'm in Lyman, so I'm literally right down the road from you now.
Click to expand...

Come in and get some drums and bags. No shipping charges, which are ridiculous.

Okay, I guess I have to order some of the new ones just to see how they stack up. Not sure, blue or brown...hmmm?
M

I needed some new bags to store a couple of vintage kits that I picked up. I didn't want to spend an arm and a leg, but wanted quality. I was hesitant to try a new company online without seeing the product but took a chance. I'm so glad I took the chance because I think these Barton bags, for the money are beautiful, highly functional and well made . I'm just really happy I chose to buy these and highly recommend them.

I've been so impressed with Barton drum bags for the past couple of years. They do a great job at a very reasonable price. I've bought several sets, especially during the past few months when he was blowing out "B-stock" bags dirt cheap. These were bags that Todd's Chinese manufacturer made to slightly different specs than the originals. They really weren't any less protective, just made ever so slightly differently. The supply of those appears to be pretty much gone, just in time for him to offer up a series of "new and improved" bags. So of course I had to take the plunge. I ordered a 12/14/20 set in the new version of blue and they arrived today. They are blue with brown binding on the outside and ivory fur on the interior.

I have to say my first impression is positive. I think they are an improvement over his original bags. I believe the padding, which was already fine, has been increased a bit. I like the ivory fur interior ( I might miss the hot pink though). The zipper appears to be the same with two actuators so you can meet in the middle. Nice padded handle like before. The blue material has sort of a neat texture to it. It kind of makes me think of the 1950s (in a good way like those old beige drum bags from back then). He also has the same bags in a brown color with a similar texture. I may have to order a snare bag or two in that to check it out. I stuck a tom in the 8x12 bag and it fit just fine. Shoulder strap included, although I have yet to use one. I expected these to be as good as his previous offerings but I think he has upped his game a notch with these.

Anyway, if you need some drum bags these are worth considering, particularly if you handle your own drums or just need bags for storage. Personally, while I still consider Beato Pro or Ahead bags to probably be the best I have owned, all things considered, I really can't forsee spending the extra for those when these will do the job for a lower price. Not just because I'm cheap but also because these work and also look cool. 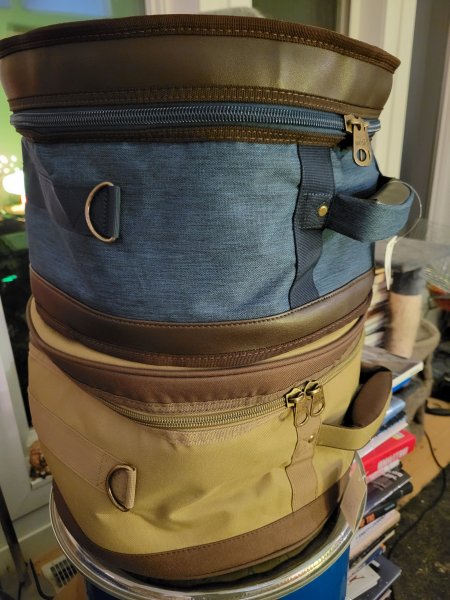 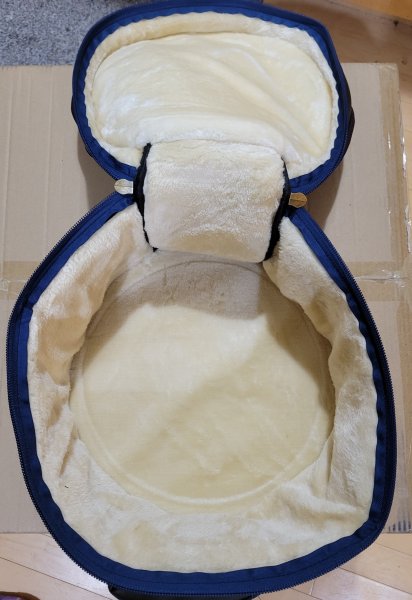 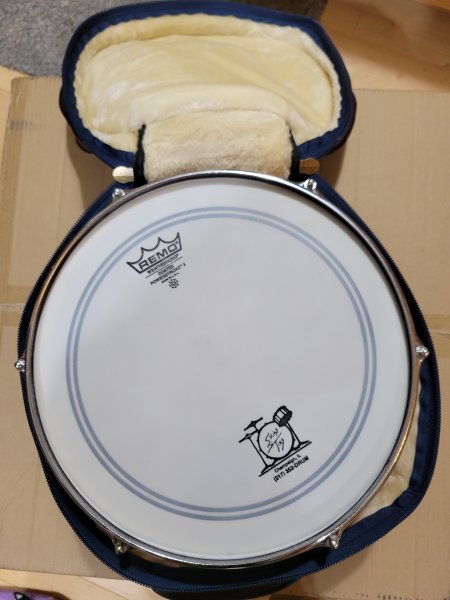 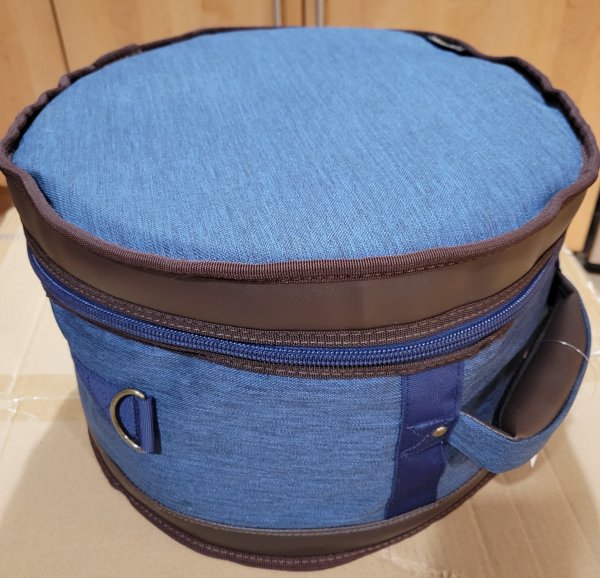 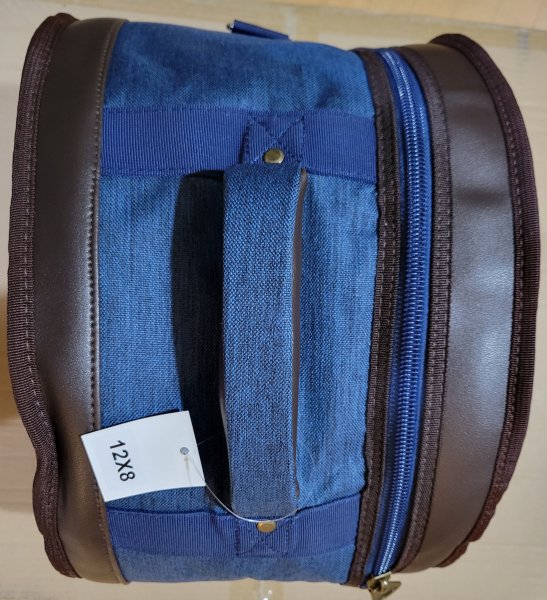 So I did buy a set of the new Barton bags.

I've been so impressed with Barton drum bags for the past couple of years. They do a great job at a very reasonable price. I've bought several sets, especially during the past few months when he was blowing out "B-stock" bags dirt cheap. These were bags that Todd's Chinese manufacturer made to...

Are there new cymbal bags?

Gunnellett said:
Are there new cymbal bags?
Click to expand...

I don't see any cymbal bags of the new design on his Reverb page.

I'm late to this thread. I've made four or five purchases of Barton bags. I've been getting the old versions on close out. GREAT bags! Only my 8" tom is without a Barton. The rest of my #goldsparkleludwigs (two racks, two floors, and three different kicks) all ride in tan/pink style! And I have a spare set to take my burgundy sparkle Super Classics out on the road if I want.
S

Barton Bags are fantastic! I have them for my Gretsch kit AND new Gretsch snare. I also have the cymbal bag. Kudos TODD!!!!!

Waiting on my second set to be delivered. Should be here tomorrow.

I ordered 2 seperate sets of the original bags and have nothing but good things to say after a year or so of use. I recently ordered a set of the new blue bags through Barton's reverb store and began the waiting process for them to arrive. I ordered the bags on November 30th and received notification they had shipped (label created) on December 1st. I missed a phone call around lunch time on December 5th and Todd himself left a voice-mail explaining there had been a slight mix up and my bags were now, in fact, shipped. I received them today, December 8th, and am very happy with them, but to me, the best part is the customer service provided by the company. It reminds me of the stories of people calling Aquarian and speaking directly to Roy Burns. That kind of service is severely lacking in today's world and has made me an even bigger fan of Todd and Barton Drums.

I have to add that my experience with Todd and Barton has been beyond expectations as well. I touched base last week to see if he would bundle a 20/12/16 together for me, he responded within the hour saying no problem. Ordered two days ago, they’re on the door step today.

We did have some some confusion on the order and 20/12/14 shipped out, he saw my reminder message a little too late. Dropped a 16 in the mail today and told me to keep the 14! I did offer to send it back anyways as I don’t have use for it so he’s sending a label and I’ll drop it back in the mail to him.

I have not opened them yet as my mom got them for me for Christmas but had me order them. So I’m holding out until Christmas day

I ordered a set of b-stock bags today!
Will report back with a review.

K.O. said:
I don't see any cymbal bags of the new design on his Reverb page.
Click to expand...

they're on sale on reverb. I just bought 2 snare bags. Can't wait to get them.

Just got my bags today. They are very nice! And the whole experience dealing with Todd/Barton was first rate all the way. Will definitely be buying more bags in the future. Gotta buy some more drums first.

You guys are the worst. I just ordered a set of the B stock olive/pink bags for my carbon fiber Tempus kit. I don't need more bags.

I just purchased my second round of bags from Barton. My first was a snare bag ‘B-stock’ about a year ago. Awesome quality and perfect bag. Has kept all my vintage snares in it safe and sound. I just ordered a new set of 13/16/24 in Tawny Brown. Can’t wait to get these in.
You must log in or register to reply here.
Share:
Facebook Twitter Reddit Pinterest Tumblr WhatsApp Email Share Link