I’m looking for recommendations for the best bass drum pillow for a drum that will be moved around pretty frequently and mic’d.

I don't know if it's the best but I use the Evans one - I poked some holes in it and attached to the lugs screws (with washers) on my un-ported drum, stays put - for the ported ones I just reach in an adjust when needed -

Evans EQ pad. Comes with Velcro to attach to bottom of drum.

I use a piece of egg crate foam and attach to the bottom of the shell with the lug screws. To dress it up a little I wrap the egg crate in black fleece. 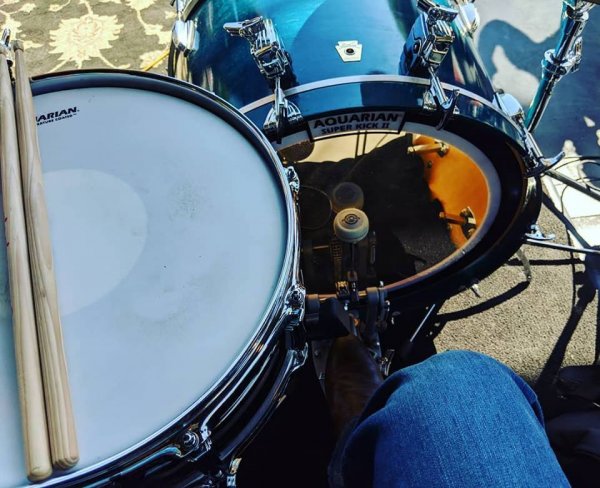 I love my KickPro. $40. Makes the drum a little heavier to carry, but it stays in place once you set it.

I use the DW hour glass pillow. Comes in 14 and 16 inch lengths with a strip of Velcro to attach it to the bottom of the drum if you want to do that.
T

I have a tube shaped one I bought on eBay some time ago that I like a lot. You can set it with as much or as little contact on the head as your prefer, is hold in place with thin "tails" slid under head and rim. Unfortunately, I've not seen these offered since. When I did use a regular pillow, I used a length of wire looped over it and secured at the ends with the screws that hold the lugs on the shell. An extra washer works well to hold the wire and keep it from contacting the drum; only the pillow touches the shell.

dangermoney said:
I use the DW hour glass pillow. Comes in 14 and 16 inch lengths with a strip of Velcro to attach it to the bottom of the drum if you want to do that.
Click to expand...

Another vote for the “I” shaped DW muffle pillow. I use the velcro and never had a problem with them shifting around.

Had the evans for a few years but prefer a feather pillow.

Feather? I wonder what the sonic effect is with that.

MasterBlaster said:
Feather? I wonder what the sonic effect is with that.
Click to expand...

In my experience, a feather is THE way to go. Especially if you're wanting adjustability. A feather is highly shape-able. Most foam or fiber-fill pillows ARE a shape - but really don't cooperate when trying to be re-shaped.

These days I'll sometimes use less than a pillow like that. But for years, it was an every gig thing (and still is a lot). I even carried one with me on the road (along with snare, cymbals and other essentials) for use with rental/backline kits... most BD's with something close to the right head can almost always be dialed in to something useful... but being able to turn to very capable and flexible muffling made the day and in and day out of new kit, new room, each day bearable.

So yes OP - absolutely try a feather pillow... IMO they are the best!!

I had a thread on this a few months back; a product called "SledgePad" was recommended, and I bought two and love them.

I'd love to try a sledgepad but i already have a kelly shu in mine and its heavy enough as it is.

michaelg said:
I'd love to try a sledgepad but i already have a kelly shu in mine and its heavy enough as it is.
Click to expand...

SledgePads are a lot lighter than a feather pillow.

MasterBlaster said:
Feather? I wonder what the sonic effect is with that.
Click to expand...

They lay flatter and are denser/heavier. Which allows them to touch the head less. Which for me is important, because I'm always just wanting to pull the decay in, but not suck up too much of the highs and upper-mids from the sound. Because as much as the low end, getting a great BD sound is also about the upper-miss and highs - the leading edge of the attack. If I muffle out too much of the highs, then the engineer has to carve deeper into the sound with eq to find them. Don't suck them out - and there they are... all ready with only minor tweaking required.

BTW this is the chief downfall of most pre-muffled heads - with their complete circles of muffling. Damping a whole circle or "ring" of the head just 'kills" the frequencies that live there. Which of course makes the lows seem bigger - "seem" being the operative word there. There is never more bass, just less highs. A lot less highs - leaving the top end dull and lifeless requiring massive amounts of eq to remedy.

Anyway - they're not expensive - so anyone using pillows that hasn't tried a feather pillow - I wholeheartedly recommend giving one a try.

Cool, but foam seems muy bueno.
You must log in or register to reply here.