My DFO buddy, El Larry, hooked me up recently with a sweet 1968 Super classic kit (13/16/22) in a nice creamy WMP about a month ago. Maybe 2 months ago, he hooked me up with a beat up Ludwig Standard "jazz fest" that was on its last leg. When I picked up the WMP kit, he also gave me a vintage MIJ WMP stencil snare just for kicks.

The Ludwig snare was painted black and sparkle green, had the right chrome lugs, new chrome rims & rods, and a black face P85 with block logo P32 butt. There were 2 mount holes as someone has put a (now missing) Ludwig tom mount on it to mount it directly (???). The stencil snare was pretty much useless to me and was missing many (metric!) rods and also in shambles - but I told him I just wanted the wrap. It took a bit of work - okay a lot! - to get the green
black paint off the Ludwig. The snare had been wrapped in something before and someone had torn off the wrap causing severe gouges in the outside mahogany ply. Somehow, the bearing edges were pretty decent with little damage. I also scored a 10x14 60's marching snare with a KB badge, small knob throw, chrome P83 and chrome P32 butt. My play was to transform the green hulk and I think it worked out.

I had to fill a lot of the outside holes and gaps. I also filled the 2 mount holes. Lot of trial and error and I had specifically practiced this on a beat up Rogers Luxor snare I mostly used for practicing hole filling & painting (that turned into a sweet Mardi gras finish I applied all by hand). Anyway, I got busy with life and this project took a back burner. I cleaned the 13/16 toms and got lazy about the bass drum. I have an upcoming gig on 8/24 and definitely want to set the kit up with this snare, so I got motivated. Taking the thin fragile wrap off the stencil snare was a real pain, and then trying to store it without breaking it was tough, too. I did break a dime-sized part on the outer edge as it simply did not come off, and the Japanese wrap is super thin and not thick. It stayed mostly intact. The lug holes matched up pretty good, but the throw, badge/vent, muffler and butt of the MIJ snare did not line up to anything on the Ludwig.

After finishing the outside, finally, and since the MIJ wrap was about 1/2" narrower than the J.F. shell, I would have some of the outer mahogany exposed. I took a medium brown furniture marker and accented the exposed wood to contrast it with the aged WMP. Stupidly, I decided to apply glue to the shell only versus the wrap once all was done and that was a BIG mistake! I could not apply it evenly and the project was nearly scrapped. Luckily, I only used Tite Bond (red label) which is like a glorified Elmer's glue (I don't have the real 3M wrap glue and this was just a beater project anyway). I have used this glue before to re-wrap a Gretsch RB snare and although it's not right, it works fine, is way cheaper and easier to use with no fumes!

So I was able to wipe off most of the glue from the shell, then did it the "right" way by applying it to the wrap. I rolled the shell a few times and then clamped it for a few days. The edges of the wrap are not perfectly affixed to the shell (like you would expect from Precision, etc.) but then again, I'm a weekend drum builder, if that! The wrap lined up fine, and is totally secure and solid for my purposes. I drilled the proper holes for the J.F. shell and no issues there. As for filling in the holes in the wrap from the old hardware spots, I did line up the badge hole but other than that, I have 4 holes for the old throw, 2 for the butt and 2 for the muffler. My plan was to fill them in with wood fill (like I used on the shell) then use a brilliant technique that Mark Cooper posted on DFO (thank you, sir!) to make paint to match the WMP. This was totally do-able (versus the traditional cut a piece out and glue it in) and would barely be visible, but I got lazy, frankly, and the drum looks pretty darn good only 90+% done. Also, I ordered grommets from Drum Factory Direct but they are too big and don't look right, so I used the original grommet off the marching drum. I used a Dremel to cut out 4 points, then was going to flare it like Gretsch does, but I failed. The grommet is in place holding the badge, but it's not great.

I had to sand and paint the inside of the J.F. shell as there was a bunch of paint inside and got it somewhat smooth. I had Benjamin Moore paint left over from my "Jazzette" project last year for the proper inside white paint. Instead of doing a label in the snare like I did for that kit and the matching J.F. snare, for this one, I decided to do a "birthday" drum. I had my dad's old manual date hand stamp from 1969 - 1974 and set the right date. I used a green Sharpie as the ink and knew I had only one shot. It mostly turned out but that's fine.

The drum sounds fantastic and as it should. Everything works well - gotta love the P83! The only thing I wish I could have finished other than filling the few holes on the wrap is that I have two black wood hoops with aged WMP inlay and I had bought mini bass claws so this snare when finished, would look just like the bass drum (aged WMP, black hoops with inlay) - I think that would look way cool! But the rods on the J.F. are too short! So I hit a wall there.
Also, I got lazy and didn't clean the bearing edges so you can see in the bottom pics that the paint is from the old (bad) paint job on the J.F. snare. The MIJ wrap is not 100% a match with the Ludwig kit but it's close enough for me. This is a keeper snare as anyone who knows vintage knows there are no KB snares from 1972. The initial J.F. snare may have been a Franken-snare anyway as the badge was reported to be on another snare - I don't really know. All I do know is this is a great looking and sounding snare now. I will be getting rid of the MIJ snare once I swap the inserts out for U.S. inserts and do a quick poly finish - it is thin and light but the outer ply is nice luan and looks decent, and I don't need the donor marching drum - it would be a great Levon Helm-style 6 lug 10x14 tom.......

So, I still need to repaint the black hoops, fix the badge grommet, and fill in a few holes on the WMP wrap. However, I am having a heck of a time admiring this beauty and also playing it.......it's an early birthday gift to me, too!!! I'm not 100% sure I will actually use the snare on the 8/24 gig - I am leaning towards the player 1920's Black Beauty I recently acquired - that's the good thing about player drums - you can actually play them!........... 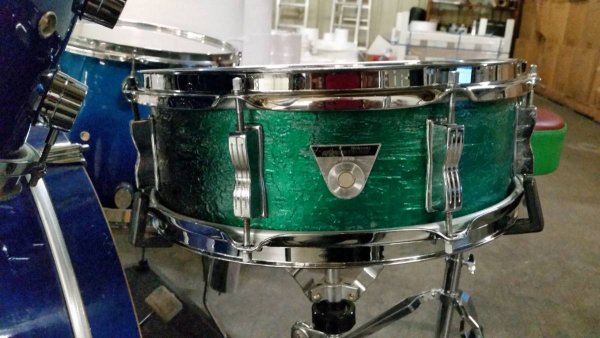 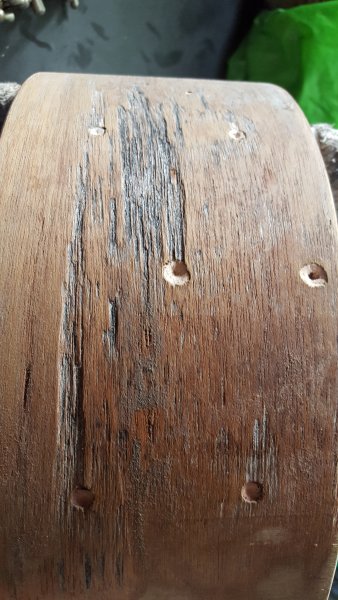 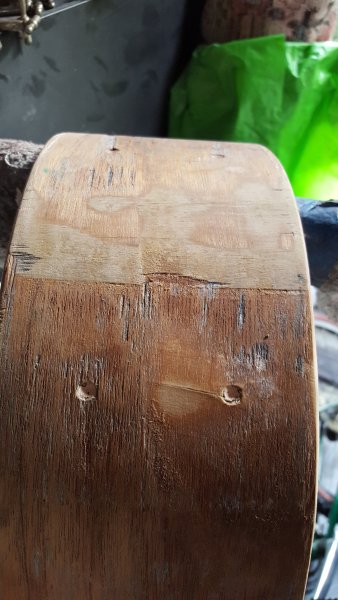 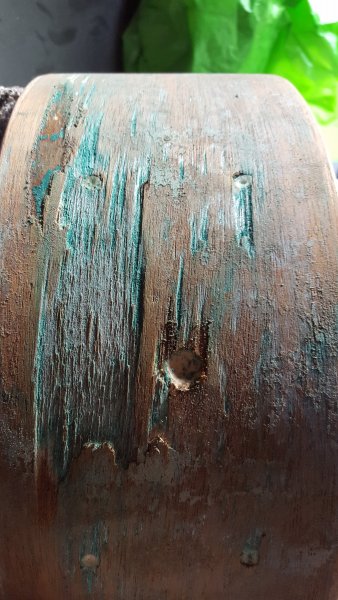 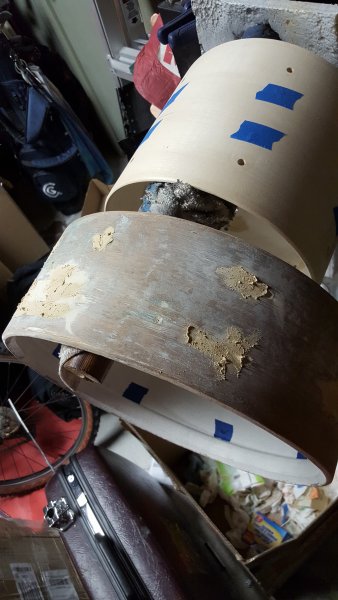 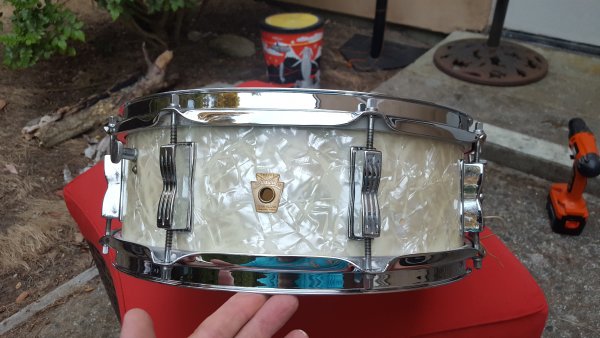 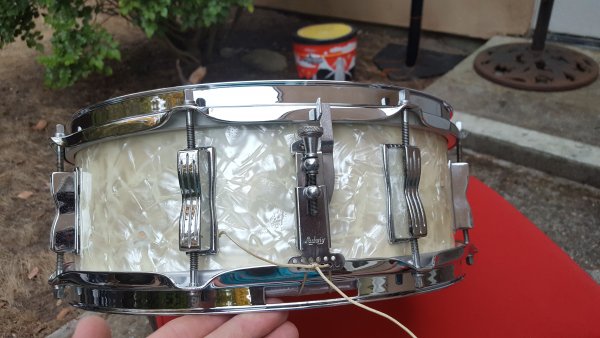 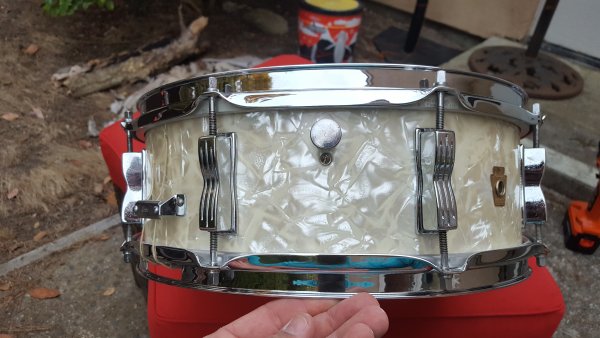 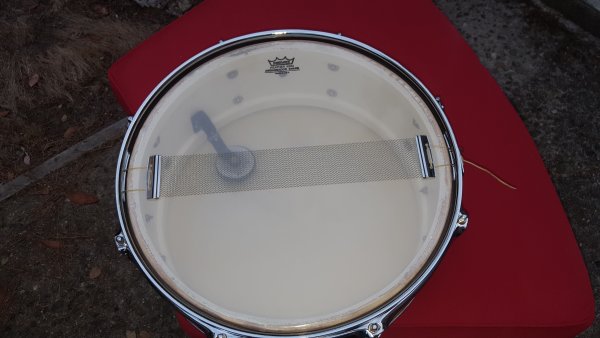 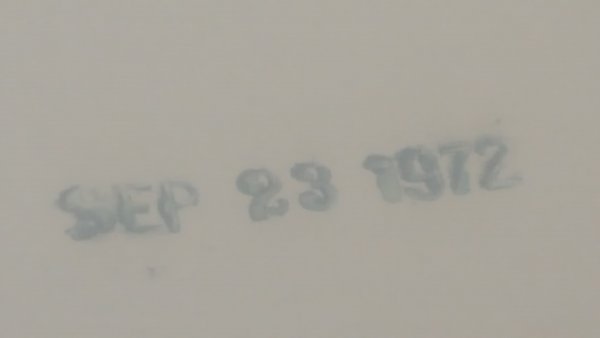