I had a Slingerland radio king that all the lugs were snapped and the shell was separating the wrap was torn. It now sits on a shelf as a display piece. Also had a Slingerland cocktail drum that the plys completely separated to the point the wrap came off. Both drums given to me by a friend who’s basement flooded bad.

Shells - Slingy, Rogers, Gretsch, Ludwig. Slingy is most consistent and not hidden by interior paint (the chocolate interior is barely paint). Rogers has solid shells but the inside is rough and covered with grey paint. Gretsch has the shiny silver sealer for "that great Gretsch sound', but the Keller shells are hit and miss. The seams are weak and the shells are thin. Ludwig drives me crazy with the wrap inside the scarf joint. I am re-doing some vintage Ludwig shells now and the shells look so ugly with the overlay, the thick layer of shells and it's no wonder those shells were pretty much always wrapped!
Hoops - Gretsch die casts, the rest are triple flange
Lugs - Rogers by far - beavertails, not B&B's, then Ludwig (60's better than 70's), Slingy (little boring design) and Gretsch is the worst (with self-tapping screws)....
Finishes - All have various nice colors - Rogers silver glass is gorgeous, as is blue onyx. Slingy and Gretsch champagne, Ludwig silver or BOP's.

Slingerland internal maple ply cracking and rering separation are common in the mid 60s. Do these problems stop by the late 70s? What makes 70s Slingerland a good build? Thanks.

I've never had a Rogers kit. They do seem stunning.
I've owned or played a lot of Ludwig Keystone, Gretsch RB and early Camco. Never had any build issues with either.
Two Oaklawn Camco kits that are perfect.
I had a 1940's Radio King that never sounded that great, and in the end all the lugs had to be swapped out for replicas as the originals all started to crack.

Pre serial Ludwig and mid-late 50's WFL very solid build quality. Best era on the edges. Rogers Cleveland handmade built to perfection. Mid-late 50's early 60's Slingerland ( the ones you had in school) Top notch. Gretsch 50's 60's. hit or miss on shell size and they like to de-laminate especially the 50's 3 ply.

That's a very hard question because IMO up to about the late 1980s, I honestly feel that all American drum manufacturers within their catalogs from the base model kits up to top of the line kits actually gave a damn...

drumtimejohn said:
Slingerland internal maple ply cracking and rering separation are common in the mid 60s. Do these problems stop by the late 70s? What makes 70s Slingerland a good build? Thanks.
Click to expand...

Slingerland 60s and early 70s were different than the Slingerland of the late 70s. The bearing edges were very different. As you know, the earlier edges were rounded ... seriously fat and have an almost flattish roundover.

The shells themselves were tight. They were building very straight and tight plies. I believe it had to do with Fred Sanford’s impact on their marching percussion. They wanted to dominate the marching percussion and Fred’s input was invaluable. He, along with others, guided them on the edges and shell tightness ... as they had to be in order to hold up under marching percussion conditions.
So, with much tighter shells and very sharp edges (relatively speaking), those special order 3ply rering shells were exceptional when compared to the earlier iterations.
I have some pics I will post in a bit that really shines a light on the edges and shells. I have to dig them out.

JDA said:
B&B (“Bread & Butter”) Die-cast Lug. This lug was used on Rogers drums between 1959 and 1964. The original iconic design was made of drawn brass with chrome plating. Known as the Bread & Butter lug,“B&B” or the “Tab Lug”, which refers to two threaded tabs that mounted the lug to the drum.
~~
no one's including those years right..
Click to expand...

Fair point indeed, but the fat edges and thin shells make for a wonderful combo. With the new repro lugs us B&B owners can enjoy another few decades, or more, to come out of these. But, I will acknowledge the original ones are the one flaw I - as a life long Rogers fanatic - will admit the brand had.

note: excluding the round badge round head screw up to about "68" ..
were not self-tapping. The pre 68-69 are all plain shapely beautifully threaded screws. easily taken in and out in and out many many times, over and over again (...geeze so much s3x in one great gretsch post!
; )
Last edited: Jan 17, 2021

drumtimejohn said:
Slingerland internal maple ply cracking and rering separation are common in the mid 60s. Do these problems stop by the late 70s? What makes 70s Slingerland a good build? Thanks.
Click to expand... 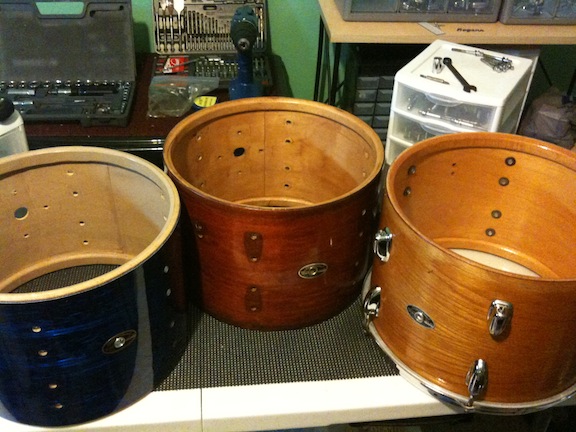 A look at the edges together 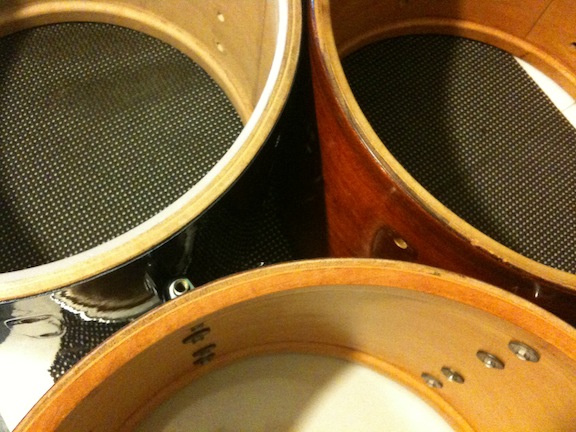 This is the 60s fat roundover. 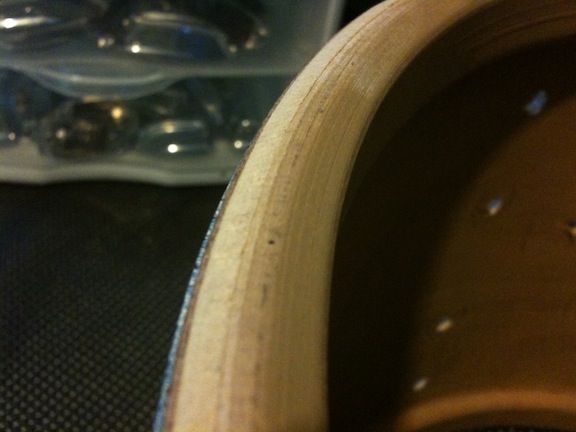 This is the early 70s edge. It has a bit more cut to it and is slightly thinner. 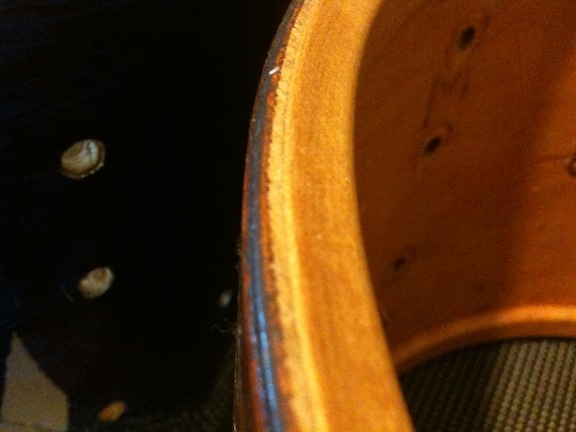 This is the late 70s 3ply special order. Note the sharper edge. 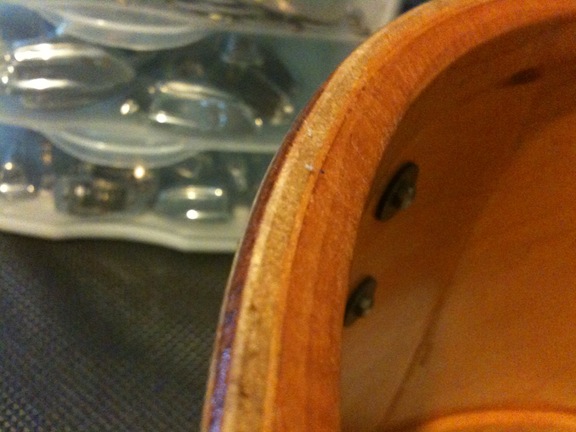 And here is the 60s next to the 1979 ... there is a very real difference the naked eye can easily perceive.
And that one of the biggest impacts on the late 70s 3ply special order Slingerlnd drums that I've been able to quantify.
It is a remarkable difference in feel and sound. 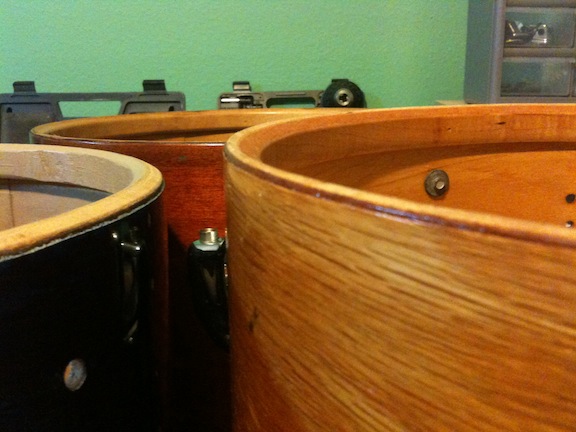 Hope this helps. It's all spoken in generalities, but is easily felt when you sit behind the kit.

My late friend (and mentor and drum teacher) was originally from Chicago and was close to the Lishon family that owned Franks Drum Shop. He told me that one day at the store they did a comparison to see who was making "the best" drums. This would have been around the late 60s or early 70s when he was hanging out there a lot. They took the heads off same sized bass drums from each brand and compared what they saw. He told me the "winner" was Camco which appeared to have the best workmanship. A close second he said was Rogers. He was a Slingerland guy but didn't elaborate on how Slingerland, Gretsch, or Ludwig fared. Granted this was a pretty casual testing mode and I have no idea what their parameters were beyond what he said (just looking at representative drums). But he was there and looked at them and had agreed with the results (at least as far as the top two). So, certainly non scientific, and somewhat random (only looking at one drum per brand) but there is that.

I have no experience with Camco drums myself but do have some Rogers and Ludwig, & Slingerland, & Gretsch and I personally would give the edge to Rogers (post BB lugs) as far as what I have seen. They just seem to have been built with a bit more care and they definitely came up with superior hardware designs early in the game. Hardware that took almost a decade for anyone else to catch up to.


A look at the edges together

This is the 60s fat roundover.

This is the early 70s edge. It has a bit more cut to it and is slightly thinner.

This is the late 70s 3ply special order. Note the sharper edge.


And here is the 60s next to the 1979 ... there is a very real difference the naked eye can easily perceive.
And that one of the biggest impacts on the late 70s 3ply special order Slingerlnd drums that I've been able to quantify.
It is a remarkable difference in feel and sound.

Hope this helps. It's all spoken in generalities, but is easily felt when you sit behind the kit.
Click to expand...

Thank you so much! I’m in the middle (loose term) of a Slingerland project and this is super helpful. I may PM with more questions. Thanks again!

drumtimejohn said:
Thank you so much! I’m in the middle (loose term) of a Slingerland project and this is super helpful. I may PM with more questions. Thanks again!
Click to expand...

Absolutely.
Always willing to lend a hand. I sold and gave away most all of my Vintage drum stuff this past year to the members here. Whatever I have left, you are more than welcome to if it works for you. I'm not an expert by any stretch, but I do have a little experience with Slingerland's.
L

NobleCooleyNut said:
Ok Vintage fans - what vintage drum manufacturer in your opinion has the best build quality and why ?
Bound quality would include , shells , lugs , hoops and finishes . Let’s not include Tom mounts in this instance .

I was told a story one time from a man with the initials WFL II that he told his father in the height of the sixties rush for Ludwig that they should use Jasper shells to keep up with orders but WFL I said "they wouldn't be Ludwig then." So you know the rest.
K

I can't speak to differences between Ludwig and Slingerland personally, because the drums I have sat down at were not mine and/or poorly tuned to begin with. I think that the drum sets I own (Cleveland+Fullerton Swivo Rogers and Oaklawn Camco) are very impressively built. I would rank them Camco, Cleveland and Fullerton in that order. I believe the quality of the sound of any drum starts with the design and care of production at the factory and then perhaps the ageing of the wood along with care of the instrument by the owner.
Camco (Oaklawn) succeeds because I tend to believe that John Rochon (owner) didn't really mess with the design and "recipe" that George Way laid out for his drums and their output was less rushed. Rogers had the genius of Joe Thompson behind their success.
G

My vote
1 Rogers
2 Gretsch
3 a tie, Slingerland & Ludwig,
of course, you may prefer the Slingerland / Ludwig tone, but that’s another discussion.

LRod1707 said:
I don't own any and don't know much about vintage. I have learned about the vintage stuff here by reading the knowledge that you guys have. So take what I write as "vintage amateur".
What about Fibes?
Reason I ask is because I've read plenty of posts that praise them.
Just curious!
Click to expand...

I have a Fibes fiberglass set.
The workmanship is a bit inconsistent and it can be a bit more work to tune them.
Overall they sound good!
You must log in or register to reply here.