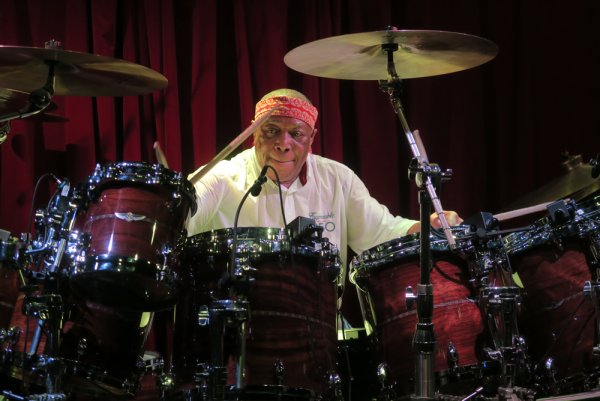 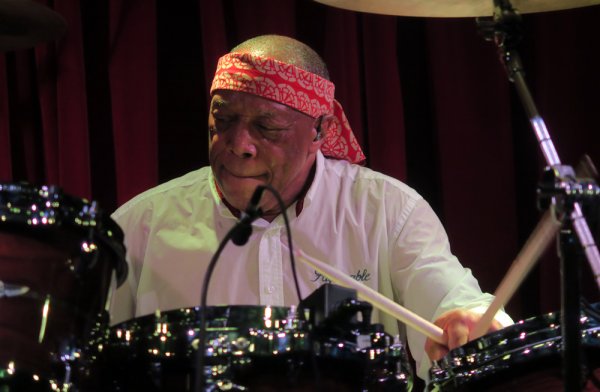 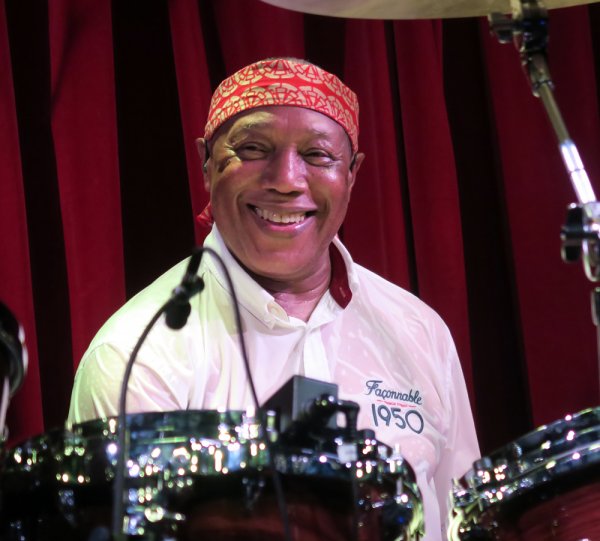 Took these images around 2.5 years ago during a fabulous concert. Not that easy, to catch his smile on stage.

More than 30 years ago, I was at Music Fair in Frankfurt/Germany (Musik Messe). They had these little sound tight boxes for testing drums and cymbals. I was testing some snares (don't remember exactly), when a quite muscular guy came in and behaved like a poser. As young and naive as I was, I played some tricky stuff with a serious face, just to keep this body builder guy down, and show that he had to wait until I'm done. After a while, he sat on a kit in this box (there were only the two of us inside) and started playing some simple stuff. I had to admit that he could certainly play drums well (what I didn't expect) and had a good groove. I still tried not to look impressed. Suddenly, he showed off some real great chops, my jaw dropped, and he was just smiling. OK, I thought by myself, he looks like a muscle poser, but plays in a different league than me, because he 'showed' me how to play.

Later, outside this box, when I heard others talking, I realized, this was Billy Cobham himself. I just had no clue how he looked like in person. Of course, I was a fan (who was not?), knew his drumming by heart and only knew older pictures of him. I just didn't get the connection.

Happy Birthday to the one and only Billy Cobham and all around nice guy!!!! 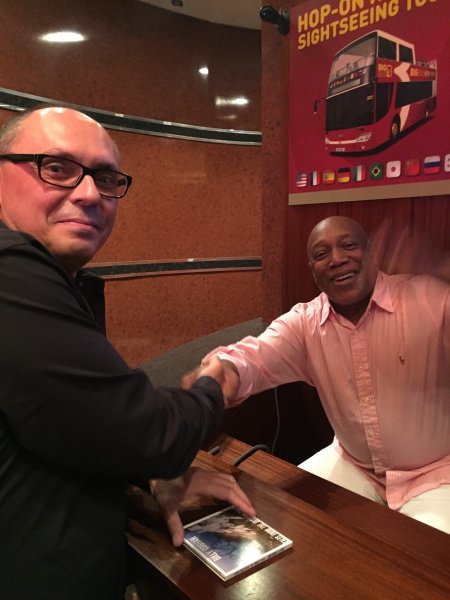 I hear ya man, not everyone gets to live in Henrietta
N

Billy and the Mahavishnu Orchestra were a huge influence on me. I bought a double bass six tom clear Fibes kit in the early 70s out of respect for him and because I was in a group in which I was never miced up and I wanted the volume. I've met and spoken and corresponded with him since and as many have stated he is one of the nicest, open and accessible people you could hope for.
C

Are you sure it wasn't Bernard Purdy? Richard Bailey did the Blow by Blow album, but I heard that he decided he didn't want to tour. I seem to recall that Jeff said something to the effect that they got off with a bit of a rough start with Purdy, but when the rest of the band came around to his way of playing, everything was smooth sailing after that. 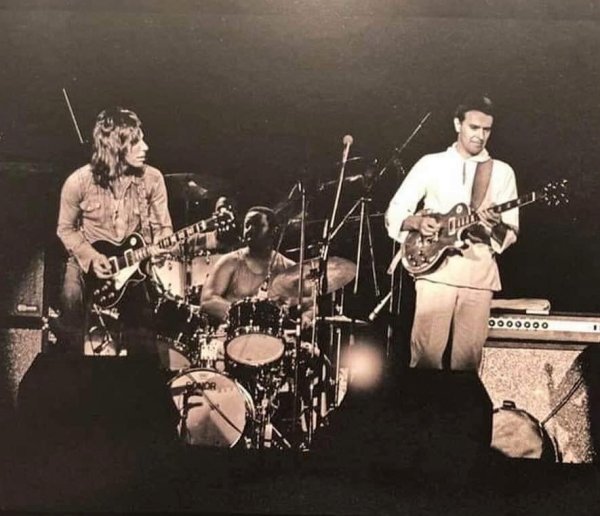 That was either Narada or Tony Smith. Billy left Mahavishnu at the end of 1973. Bernard Purdie toured with Jeff Beck.
Last edited: May 17, 2022

RIDDIM said:
That was either Narada or Tony Smith. Billy left Mahavishnu at the end of 1973. Bernard Purdie toured with Jeff Beck.
Click to expand...

jptrickster said:
The timeline gets a little fuzzy back then in Rochester the reefer was incredibly good
Click to expand...

Plus, Narada was/is a force to be reckoned with and I would love to have seen/heard his interpretation of some of the earlier Cobham stuff. Narada with Jeff Beck was pretty insane, too. Forget which album though. 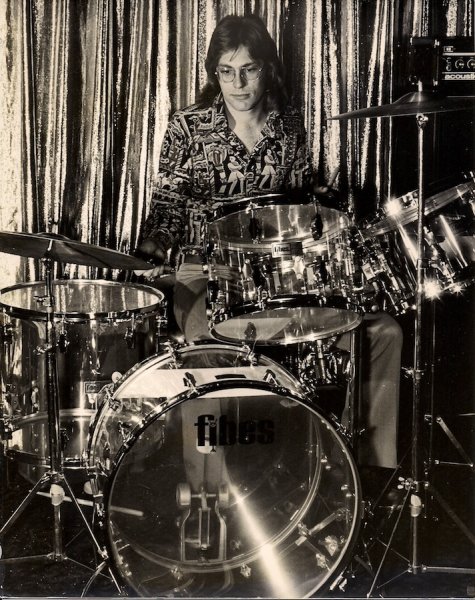 nanashi said:
This is for the people that don't have time to play all the clips on the above post. A fun piece and a fun solo.

The thing about Billy that has always blown my mind was that although he is perfectly capable of double stroke or closed rolls... he rarely employs them. He is so strong/fast/powerful (did I say strong?) that he does almost all that incredible stuff SINGLE STROKES!
Sorry for yelling.
B

Billy is my main man when it comes to drums. I first heard him in a record store where they were playing his new album, Total Eclipse. I bought it on the spot.

I have seen him 4 times and each one was killer.

He is really nice too as long as you don't just say "I'm a big fan. You're the best. I saw you in ..." Then he just says yeah OK, thanks, signs your CD, and moves on. But the last time I asked him how he got the sound out of the drums he does. Is it the heads? The sticks? He got real philosophical and said you don't make a sound by hitting a drum, you pull the sound out of it which makes it sound the way it does. Sweet.

I sat behind him at Graffiti in Pittsburgh many years ago, he had a trio at the time. We were going so crazy he looke dover his shoulder and said "Ok, chill." Talked to him afterwards about drums and couldn't believe I was meeting a hero of mine and he was listening and talking.

This kills me every time I see it. Beats trying to catch Rockschool back in the mid-80s for a brief clip of MO.


This one was such an eye opener the first time I saw it.


he was CTI house drummer before Mh\ahaVishnUE

have that album memorized owned it back in the day
T

I wore out 2 copies of the studio album of this in high school.
Louie told me the Billy read the whole thing down on the session.
No second takes. Now there’s a man!

I still remember hearing this Mahavishnu track for the first time. Was in my teens. Enjoying the guitar intro. I was thinking, I just don't get how Cobham can join here. I don't get what the beat is. What can he add to this? What can a drummer even do on this?

Then the drums came in and my brain fell out of my head.