“And of course there’s a very long list of ex-cymbals that I’d prefer not to think about.”

Ah, I can indeed so relate to that statement. And to some of them I still owe alimony.

Just my normal Sunday office, BUT a new twist up to my cymbal rig this morning... my Sabian bag has a new ride! This bag is my acoustic pop set and I really enjoy them in the context of quieter playing when I need a lot of lush warm dynamics. I was using a 22" Legacy Heavy Ride and while very nice, I took the chance and picked up this 22" Crescent Element from hoochymama last week and I am so pleased that I did. The bell is a bit weaker than the Legacy but overall a much better fit with the HH Vanguards that make up the balance of the set. Was a joy to play his set today! THANKS FOR THE RIDE
hoochymama!! Another cul de sac socially distanced jam over the weekend! From a recording session last week: 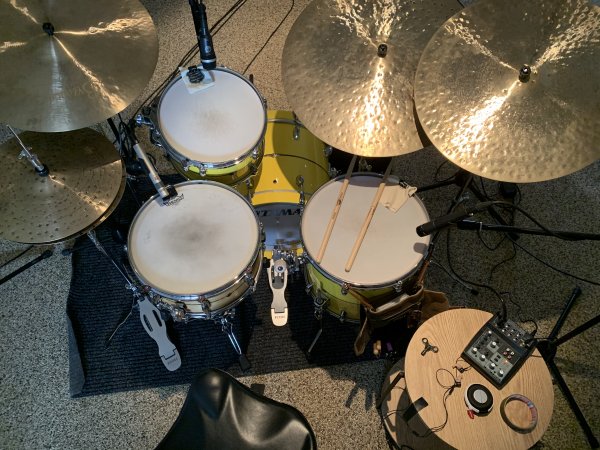 Another session coming up. A bit of preparing and using a bigger kit this time. Tama Star Walnut and Meinl Byzance pies: 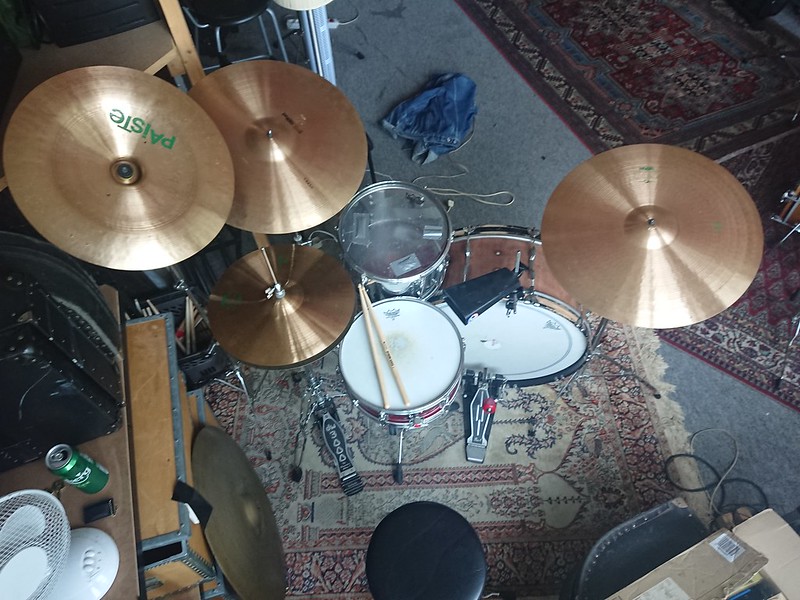 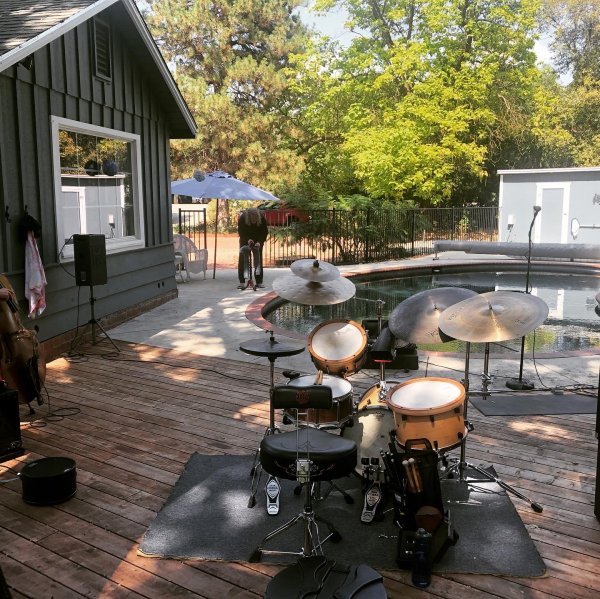 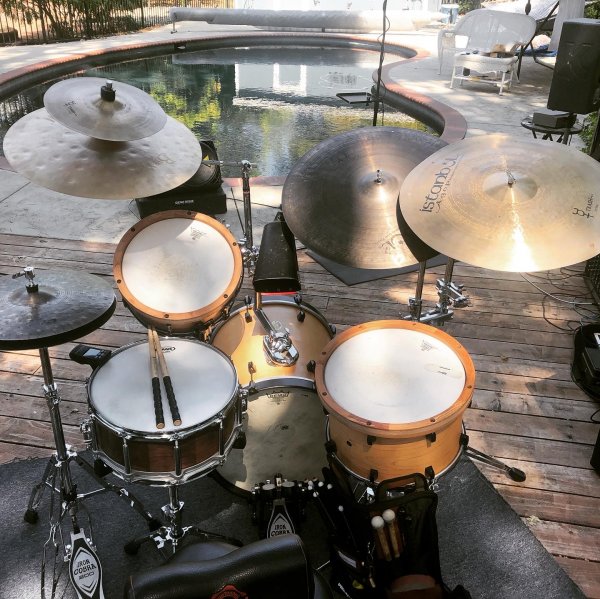 How big is that trash hit?

Sinclair said:
How big is that trash hit?
Click to expand...

22 fun loving inches. It has a swell like no other. 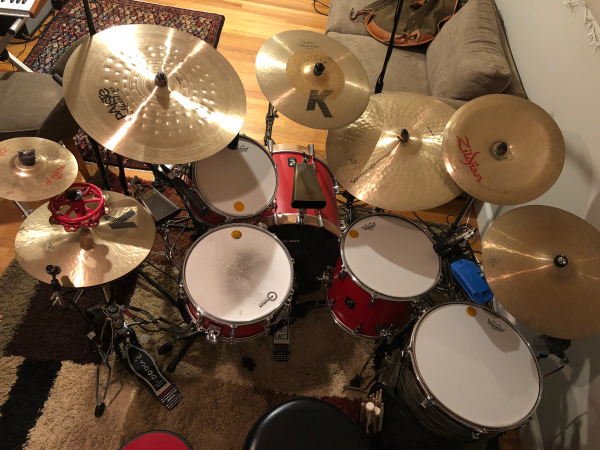 The Dream is the newest addition (purchased right here at DFO). I really dig it so far - trashy, and interestingly, louder than just about every other cymbal in the lineup, which gives it a special purpose!
(The kit is Sonor SQ1 20" version, w/ my old Ludwig 16" as a second floor tom). 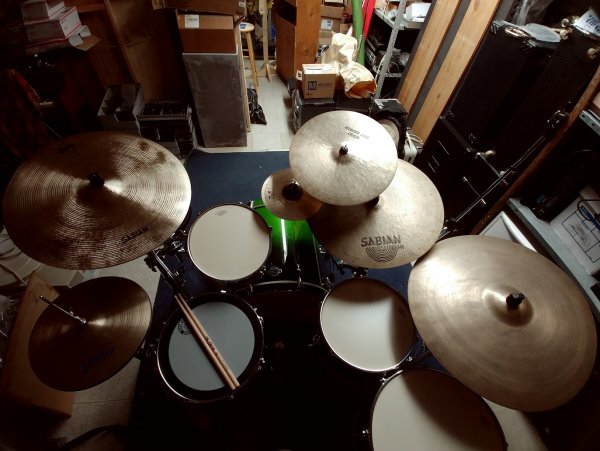 After lurking here for a while I finally got the energy together to set up my drum kit. Since it's been a while since I played much, I decided to put together a set of mostly big, dark cymbals; for me, they're more fun to wail on! Drums are Sonor Select Force (the Chinese birch ones), 12/14/16/22.

From left to right:
14" 70's Zanki Rotocasting hi-hats - perhaps the best pair of hi-hats I've ever played... semi-bright, semi-dark, they bark and wash beautifully.
22" Sabian SR2 Thin - from the hammering and the bits of crust left on the bottom, I think it was probably one of those HH Big & Ugly rides. Post lathing, it's dark, deep and very trashy/breathy. Opens up a bit too easily for use as a main ride, great on the left side.
10" CJ Distributions/Tongxiang stencil TN spalsh [sic] (yes, that's actually what's printed on it!) - decent Chinese B20 cymbal. I bought a few different splashes because they were so cheap, and this is the darkest of the lot, so it blends well with the other cymbals.
16" 80's Sabian HH Medium Thin crash - a recent purchase and holy moly, this thing has character. It's not as smooth as my old main smaller crash (17" trans stamp) but the complexity fits with these cymbals better, I think. It's also surprisingly rideable, should I want to quiet things down a bit.
22" 80's Sabian HH Mini Bell Ride - I wanted an 18" Sabian Flat Bell (or Ed Thigpen) ride; I got a 22" Mini Bell because I found it going cheap. It's still got a lot of the silvery ping (damped a bit by patina), but it has more volume and opens up more than I would expect a flat to, without ever getting out of control. Shank crashes are nice, too (but not open, hence the nearby crash). Glad I found this one!
24" 70's Zildjian A (Canadian) - fairly thin at just under 3000g. Much darker and more complex than you would expect from a 70s A. Never gets gongy, probably because the lows are inaudible; it wobbles like a jelly mold. Another keeper; it sounds great through a wide range of volumes, from quieter jazz to bashy rock.

One problem with this cymbal set is that there isn't a great bell among the lot! I've got a few more cymbals that I might sub in, if I need one.
T

Had a little session with my jazz band out on the b-ball court behind the house. Was planning on doing in my studio, but the horn players had covid concerns about blowing spit all over the room through their horns. Other than a few wind gusts, it went great outside. Heres a set put together for the Living Room, its way too hot here in Vegas to play the Big Bonham set in the garage.

LZ 1 inspired smaller and way cheaper set to play in the cool comfort of the AC'd living room.

Supralite 14 x 6.5 Snare- (tricked to sound smooth like a Supraphonic- line the inside with gaffer tape, put a used snare resonant head in the basket and then the supralite on top of that, add a ludwig tone control barely touching the Emperor X coated on top ) Which adorn a 60’s Rogers Blue Onyx 12/14/18 (12x18” kick converted by the fine folks at Precision Drum, flawless work as usual) and the staple, a script Badge COB Dynasonic. 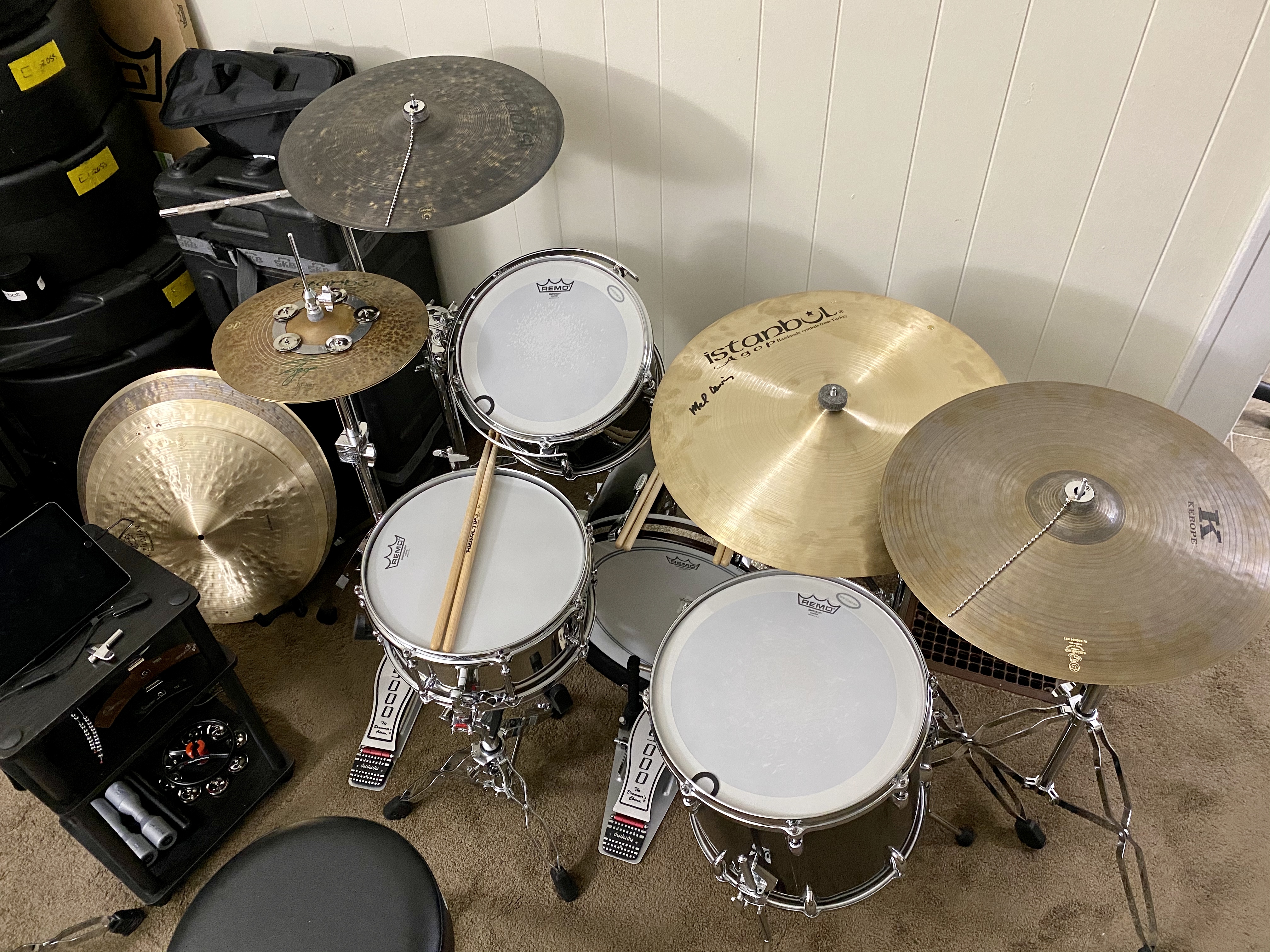 Which adorn a 60’s Rogers Blue Onyx 12/14/18 (12x18” kick converted by the fine folks at Precision Drum, flawless work as usual) and the staple, a script Badge COB Dynasonic.

Wow, never seen the Monophonic sizzle and hats. What are they like?
You must log in or register to reply here.