I ran across this BDP kit recently. Purchased around 1980 or so based on the Slingerland serial numbers. It sort of struck me that it was somewhat set up in a Bonham configuration, though smaller at 13,16,18,22 for the Slingerlands with a Ludwig SS snare drum. The SS seems to date into 1979. Kick drum and rack tom were never drilled for mounts. A Ludwig Atlas snare stand does the rack tom lifting. The kit also came with speed king kick pedals. Ludwig Rocker kick drum batter head with a big LUDWIG decal. The kick drum has vertical felt strips on each side, like Bonham did. Clearly this owner had a sense of both Ludwig and Slingerland in his kit. Bonham played both brands along the way.

In doing some digging I found out Bonham used a smaller Ludwig BDP kit on tour during the end of 1968 into January 1969 (13,16,16,22). I had no idea Bonham ever played such a kit. This was the same kit Robert Plant was considering selling at auction back in 2017. That kit was on display at Seattle's Museum of Pop History for a while. Sources indicate it was a loaner kit used for that 1st USA tour. In any case an interesting "coincidence" on how this 1980 Slingerland was built - sort of mixing up some of Bonham's kit features over the years. Could this Slingerland BDP kit have been purchased around the time of Bonham's death in 1980 as sort of a tribute to the band? That would be cool. No way to know for sure as the original owner passed away a couple years ago. 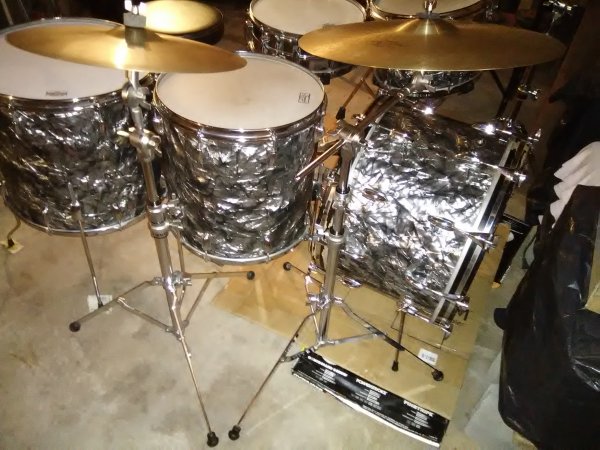 What year are these Ludwig Rockers?

Yamaha Stage Customs... and what about the snare?