Can you remember who you sold your very first set to?

Sold to or who /what store you traded it to...

No.
My parents sold them. It was a clandestine transaction.

I’ve had two drum sets in my life, and for 35 years I’ve been using the Pearl Exports my dad bought me for high school graduation.

The drum set before that, however, was a set of CB700s my dad bought me in ninth grade when I was about to inherit the drum throne from the graduating senior. Soon after I got the Exports, I gave the CB 700s to my young nephew who was quite excited to get them.

I sure do, what makes you ask? 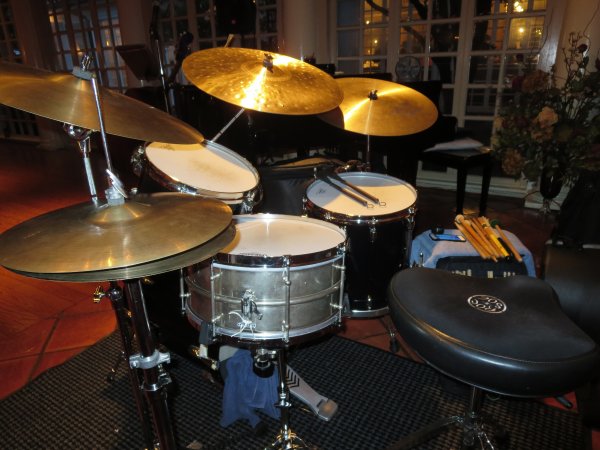 My lust for Blue drums, my love of the way that the Yamaha Tours sounded (in sharp contrast to the Gretsch's which I also love, but they're different) and the gigs I had at the time, made me start my "modern" sounding shell bank with the Yamaha Tour Custom's in Cobalt Blue. 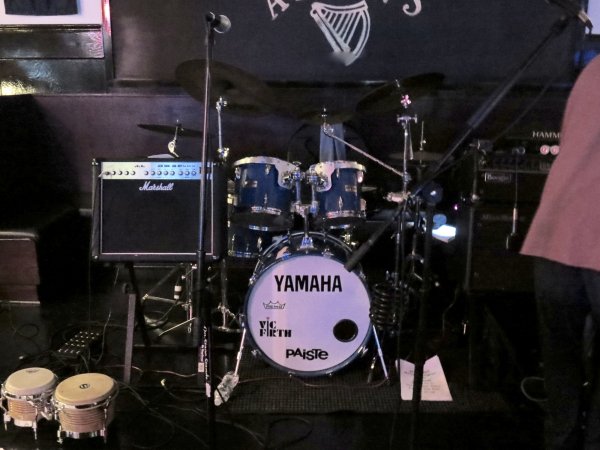 Those two shell banks are my two main kits today and I love them both. A pretty boring story, but pretty easy to remember. But YOU asked...

nomsgmusic said:
I sure do, what makes you ask?
Click to expand...

I told you I don't remember .
The Question for everyone is "Do You".

My very first set (a no-name Japanese stencil kit from the late 1960s) was never sold to anyone. While I was on vacation, one of the kids up the street told my mom that I said he could have them (I didn't tell him that, but I did allude to the fact that I would sell them to him eventually).

I already had another, newer, better kit at the time, so I think my mom was relieved to get rid of the extra drums in the garage. She said, "Sure! Go ahead and take them!" I came home from vacation and my first kit was gone. I didn't really care at the time — but I wish I had it now, for nostalgic reasons. He did steal my microphone, though. I wanted my mic back!

nomsgmusic said:
what makes you ask?
Click to expand...

Its a drum forum
O

Sure - it was some no name kit, mongrel toms/bass my buddy had put together and made to match with black and white striped electrical tape. They were his first kit as a kid, I bought them off of him when we are about 12 for $100 after his parents got him a brand new set of white Pearl exports. He was king for awhile with those, I was a few years behind him learning and got the kit with the toms that swung away from you every time you hit them.

A year or so later I upgraded to a used set of black Tama Rockstars. Got them from Daddy's Junk Music, traded my old kit into them for some partial credit. Even at the time we wondered why the heck they took them.

After I upgraded to a used set of Slingerlands, I gave my MIJ stencil kit to one of my best friends who was (and still is) also a drummer.

I never met the buyer but I sure remember selling my first set. It was a cheap 80s model with a 22" bass drum and I sold it on ebay for a surprisingly good price.
Shipping that thing was a lot of fun: Two giant boxes that were made of several old boxes and about a pound of duct tape contained 5 drums, 3 cymbals and a bunch of hardware and they were filled with hundreds of little styrofoam balls. The best thing was carrying those boxes to the post office on a hot day in two trips. Over there I found out that one box was about half an inch too big and a bit too heavy which would have doubled the shipping costs, so I opened both boxes in the post office, releasing a fountain of styrofoam onto the floor. After an hour of cursing, squeezing and rearranging, I managed to get them shipped. At least, I entertained the other customers and the clerks and I learned my lesson: sell drum sets locally, even if you make a little less money.

Take all the time you need.

Yes, it was the first kit I ever owned, that I bought with my paper route money. Just one of those blue sparkle MIJ kits that was ordered out of the Sears catalog. I had that for a few years and finally sold it to a close friend. He beat the crap out of it, then he gave it to his younger brother, who beat even MORE crap out of it.

Yep, his name was Larry. A genuine MIJ set of Cortley drums. Guessing around the early 80’s? They were white, I spray painted them black and he painted them white again.

I have posted this before but I always thought it was a cool story so thanks to Joe's invite , I can share it again...

This was my cousins drum kit in the late 1960s and I first remember falling in love with it around 7 or 8 years old. We were at their home often and each visit I spent playing this little kit (a standard 4 piece at the time). Then that faithful Christmas in 1970 when my cousin received a new Slingerland set (a 50N in sparkling silver and full hardware just like the 70 catalog) and my Mom bought me his blue custom fiberglass kit! You know that I was just as thrilled and proud with this set as he was with his! 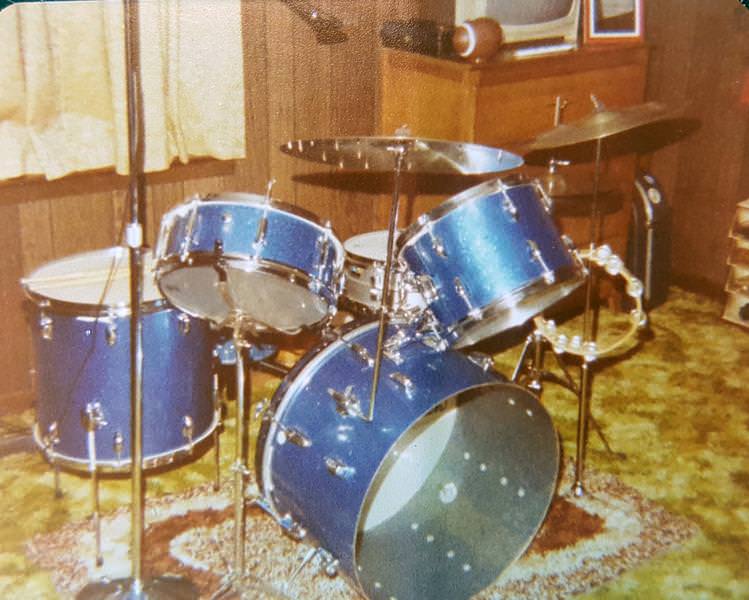 I have no photos of the drums in their original configuration, but it was obviously the same set less the converted tom made from the kit snare. I bought the Ludwig Acrolite around the summer of 1971 from a kid on my street, I THINK I paid $40 complete with the case and stand. So I added to my toms by converting the matching snare. This kit served my dreams of rock stardom well until the day I picked up of 1977 TAMA catalog In 1978 I ordered my first pro kit and impatiently waited on its arrival from some distant land, while continuing to play my trusty blue kit (now abloom with homemade cymbal stands). I had to pre pay for my new Superstars and when the store called to tell me my drums had arrived, they explained that I still needed to pay about $100 in sales tax! So like any good young rock wannabe, I promptly headed to the local pawn / music store and sold off the blue set for $75.00! I knew I would never see them again, but the excitement overshadowed any thought of nostalgia?

Fast forward 15 or 20 years later and I received a call asking if I happened to be Ward Wilson and did I ever play a blue sparkle drum set? Why yes I am and yes I did why? It was a young high school band director from a small town 30 miles away who had met me a few times at my drum shop. He said he was cleaning out a large storage closet in the band room and discovered an old blue sparkle set with my name painted on the kick head, someone had tried to spray paint over it but it was still clearly visible. He said they were in bad condition but if I wanted what was left, I was welcome to come pick them up. So just like that, I was reunited with the very set that had begun my drum love affair all those years before.

So they are nested under a workbench and I have plans of restoring them one day for my Grandson. I did the snare a while back and while it sounds AWFUL (trust me, a boat shop made fiberglass drum shell is NOT all it is cracked up to be!) but it is with me and I think I will keep. My grandson will get his fathers first snare that I built for his dad when he played in middle school band.

Sorry for the ramble, I just think it's a fun story to recall and tell. Well, at least for me!

My first kit was a Japanese Stencil Kit with the label Supreme . On a weird purple oyster finish . My Dad sold the kit to these two guys that had a Reggae band . We took the cash and bought a Pearl drum set . I really disliked that Pearl kit and I sold it a few years later to help finance my first Gretsch Kit .

I got my first kit when I was like 9. Cheap stencil 5 pc! I had it all the way through Junior high and sold it to a buddy in my school. I saw a big 9 pc. export kit at a local drum shop and was mesmerized. That was the catalyst to get my first kit sold to him (for peanuts). I wish I would have kept it!

Still have it. Is my blues/rock gigging kit. 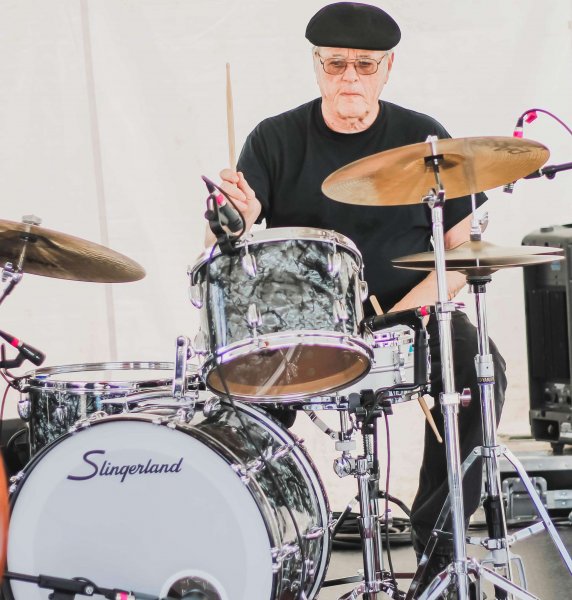 Still have my first set. I got this 1974-ish Gretsch in 1983 and I have managed to hang on to them all these years with no mods or changed to the finish. The set came with a 1966 supra that I still have too but I managed to find a chrome Gretsch snare to go with them. It would be cool to have the matching 5x14 rosewood snare from the 70's but I don't think I have ever seen one. At least not one in that size. I'm actually thinking about starting to gig these again as it has been years. 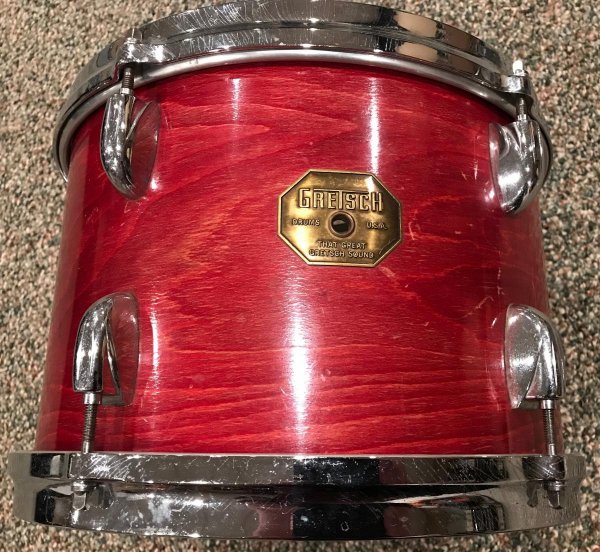 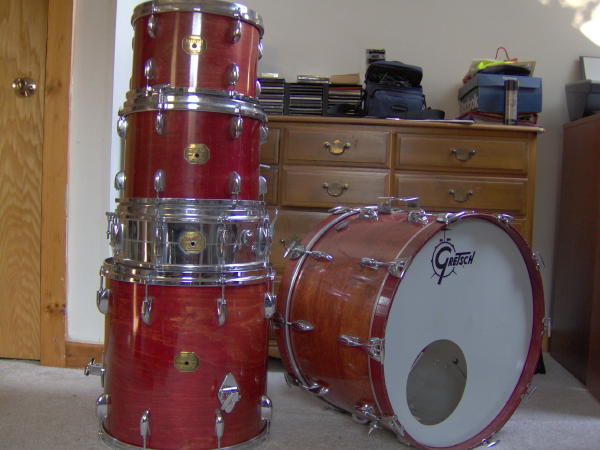 I have no idea what happened to my first kit. I was in Vietnam when my parents decided to move from Maryland to Florida and that move triggered their selling the kit. To whom or for how much I don't know.
You must log in or register to reply here.