A recent query from another member about finding green marine pearl drum wrap led to my investigating celluloid acetate drum wrap from Chinese sources. I had known about the stuff and a fair selection can be found on ebay in various sizes and colors. In fact I had used some "Peacock" pearl from China on a set a few years back (I did not buy that wrap direct from China but from someone here in the states who had imported it...somewhat at my urging). This time I went a little deeper and actually contacted one of the places in China that makes this stuff. They responded with information and emailed me their catalog (attached).

Perusing the catalog was like "holy crap" look at all these cool wraps. If you take a look I imagine your response will be about the same but before you get too excited here are some details. First of all, of the wraps shown in the catalog only about 15% - 20% of them are in stock. On the wraps they have stock the minimum order is 5 sheets. However you can mix or match colors to get the 5 for the order. Most of the marine pearls are $20 a sheet. Some of the other designs are more. The most expensive one of those I asked about was $40 per sheet. Shipping on 5 sheets to the USA is $85. That averages out to $37 per sheet, which is still a great deal if you're used to paying Precision or Jammin' Sam $100+ per sheet of Delmar wrap( $200+ per sheet for custom colors). The wraps that are in the catalog, but not in stock, can be produced for you but in that case the minimum order is 200Kg which would probably be a bit over 200 sheets. At $20 per sheet (or more, depending on design) plus the shipping on 200kgs from China the cost of that is going to be a rather steep investment. Of course you could start a small business selling off the excess. I'm sure it's still pretty reasonable on a per sheet basis but you have to buy a lot of it.

The one color that really struck me was a jade green marine pearl, close to the color being sought in the post that started this search. I was ready to order five sheets at once but, unfortunately, that one is not in stock. 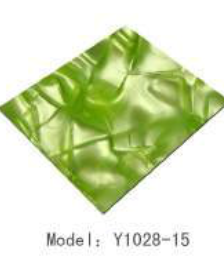 Anyone with deep pockets that wants to order 200kg of that can look me up and I'll take some sheets off your hands.

So this stuff is different from standard drum wrap. The thickness varies on the in stock items but most of what they have is around .5mm thick which is about right for drum wrap. This stuff is pure celluloid though and not laminated to other plastics like the Delmar products. Delmar gets their celluloid for marine pearls from Italy then slices it very thin and laminates it to an opaque backing and a clear or tinted overlay. This wrap from China is just solid celluloid like they used back in the old days on drums. It also comes in bigger sheets (1600mm x 750mm, approx 63" x 29.5"). With no backing the celluloid is semi translucent depending on the color and the overall look may be affected by the color of the drum shell you're wrapping. With some of the lighter colors it might be wise to paint the shell a base color that complements or reinforces the color of the wrap going over it.

I ordered 8 sheets in two colors @$20 per sheet plus $135 in shipping for a total of $295 (a bit over $36 per sheet) paid via paypal. I just ordered it last night so no idea how long it may take to get to me or even if it will. Pretty sure it's not a scam though because we had a pretty lengthy correspondence back and forth via email about various things and it would seem that if they were taking my money they just would have said "yeah we have that green, send us money now". Instead the contact seemed eager to help me select what I wanted from what was available although there was usually about a 24hour gap between query and the answer since we're on opposite sides of the world. The contact person is named Holly Rao and the address is

She seemed most helpful. I ended up ordering two marine pearls. Most of the wraps I really wanted were not available. I decided on an orangish pearl and a darker green (similar to Gretsch's Emerald pearl of the early 1970s), Two colors that are not in the Precision catalog (at least not for $20 or even $36 a sheet). I don't necessarily have projects for these wraps but I have plenty of shells that have potential if rewrapped so something will come from this.

I'll be sure to report when the wrap arrives...or if it never does

Maybe if enough people inquire about it they'd re-make that green too. I'd love to do a vintage style set in that wrap.

Wow! I love the greens, but Y1016-30 reminds me of a Rogers kit on a semi-recent thread that was gorgeous. thanks for the post.

I bought a piece of WMP (12"x62") for $20 shipped. Took about 2 weeks. It has a funky chemically smell. It looks pearly and okay, but it's thin (I knew that going in) and I am just not sure whether I want to buy 2 more pieces to wrap my kit (8x12, 10x14, 12x16, 5x14). Still on the fence. I think it will work but the drums are mahogany and the wrap will show the underlying color thru so it will be a tad dark. It is not white-white, but pretty close to white. Too bad they don't have aged WMP (only a yellow, and other colors). I am debating just cutting into strips and making it a center band versus the entire drum.....

If you’re using glue, won’t the glue color ALSO be seen through the wrap?

Sirius is going to have a channel dedicated to this topic.

They even come in psychedelic red!

A pity that, even though I live in China, I still probably have to buy in bulk.

davezedlee said:
If you’re using glue, won’t the glue color ALSO be seen through the wrap?
Click to expand...

3M-30NF dries clear so it shouldn't be an issue. There are transparent areas in Delmar 60s style Oyster Black and it's not an issue with that wrap. I suppose if you used the green contact cement it could be a problem. These Chinese wraps aren't transparent but they are somewhat translucent, at least the lighter colors.
Last edited: Mar 9, 2021
J

In Europe, we got similar wraps from Taiwan through ST Drums in Germany.

It is entirely correct that they are translucent, and that it makes a difference whether you glue them directly to the wood - or paint the wrap on the backside or the shell.

I prefer to paint the backside of the wrap - just make sure your glue doesn´t dissolve the paint..... 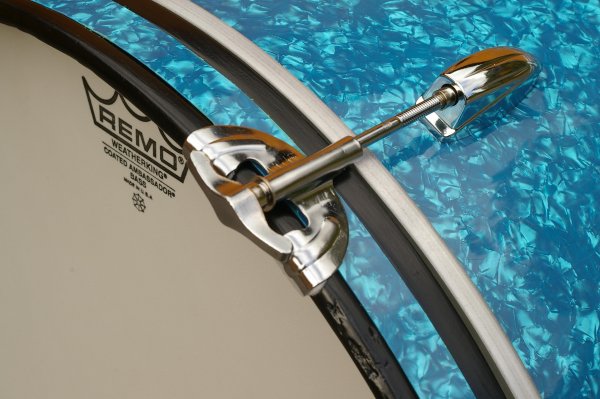 You were right Holy Crap!!

Holly got back in touch with me to confirm my order. She mentioned that it is possible to get 2-3 sheets made up as a "sample" for $100 per color + shipping. So maybe that green is do-able. The only thing is she said it would be "A4" sized sheets. I don't know how big those might be (I've sent an email asking) but suspect they're probably not big enough to wrap drums. If they are the normal sized sheets I'm there.

K.O. said:
Holly got back in touch with me to confirm my order. She mentioned that it is possible to get 2-3 sheets made up as a "sample" for $100 per color + shipping. So maybe that green is do-able. The only thing is she said it would be "A4" sized sheets. I don't know how big those might be (I've sent an email asking) but suspect they're probably not big enough to wrap drums. If they are the normal sized sheets I'm there.
Click to expand...

I was reasonably certain that was the case. Dang!

Well anyone that contacts them as a result of this post please ask about Y1028-30 ( the wraps with the 30 suffix have the biggest chip pattern) even if you don't want it. Maybe if they get enough inquiries they'll make some up and those that want it can just buy the 5 sheet minimum. I'd love to do a vintage style set in that wrap with either Imperial or Radio King lugs ( or...if truly dreaming, Rocket lugs) and vintage style fittings. Along the same lines as the Peacock Pearl set I did about 5 years ago. The last thing I need is another drum set, but these projects are so much fun.
Last edited: Mar 9, 2021

These are very cool, but my head spins a bit with all the options available. Did you have to email with each one you were interested in to find out what was in stock or do they have that online somewhere?

lossforgain said:
These are very cool, but my head spins a bit with all the options available. Did you have to email with each one you were interested in to find out what was in stock or do they have that online somewhere?
Click to expand...

After a couple of emails about specific wraps they sent me a spread sheet of what was in stock. It was still tough to keep going to the catalog then try to find the number on the spread sheet, which is more or less randomly arranged. It's also not entirely accurate as a couple of ones I asked about that were listed were not actually available.

I was going to upload the spread sheet along with the catalog in my original post but it is not in a format that the forum will allow me to upload. Maybe I can convert it to another format.

Okay I converted it to a pdf file.

These are the in stock wraps....mostly. The number in the parenthesis is the thickness in MM.

Any link to the seller or company website to see the colors? I'm late to the game & the spreadsheet #'s mean nothing to me.....thanks.

JazzDrumGuy said:
KO, my seller was candyhk888, who was yours? I'd like to check for other colors. Maybe my hang-up is the WMP is too W......
Click to expand...

This is the website for the place I ended up dealing with.

JazzDrumGuy said:
Any link to the seller or company website to see the colors? I'm late to the game & the spreadsheet #'s mean nothing to me.....thanks.
Click to expand...

The spreadsheet numbers relate to the catalog numbers in the catalog PDF that I attached to my initial post. You can see the colors there then look for them on the list to see if available from stock. Anything in the catalog is available but if not in stock you have to pony up the dough for a massive order instead of just 5 sheets.

From what I’m reading, celluloid has a number of problematic issues. It shrinks, it deteriorates, and can be flammable. This article is on celluloid knife handles:

the trouble with celluloid handles

What is Celluloid? (with picture)

Celluloid is a material that's made by plasticizing nitrocellulose using camphor. Though flammable, celluloid is extremely durable...

It isn’t even made in the US anymore due to safety issues, and is only made in two factories in China.
You must log in or register to reply here.