Chick Corea has passed away

Say it ain't so! I've been a fan of so many things he's done for most of my life. I'm sorry I didn't get a chance to see him live. Loss of a giant, for sure. 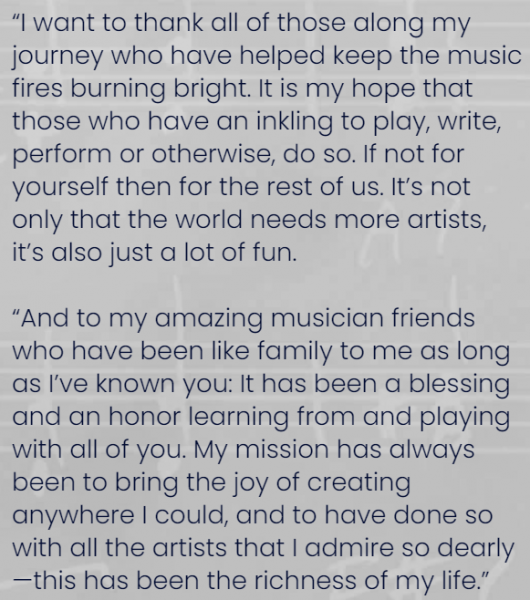 highmileage said:
Say it ain't so! I've been a fan of so many things he's done for most of my life. I'm sorry I didn't get a chance to see him live. Loss of a giant, for sure.

This farewell is REALLY touching.

Playing along to Spain tonight seems a fitting tribute.
B

RIP
i went through an early chick thing , by the time he hit leprecaun , i could only respect it but didnt want to play it ( gees after the late rio kawasaki , at a restaruant gig i played with him and lincoln goins bass and me on only bongos , called leprecaun with no rehersal , i definitly didnt want to play it again haha ) .

but, when i played congas , a herbie mann album with potato valdes had a really hip piano player , and on " stolen moments ", you can hear herbie say " you got it chick ". so playing congas with mann's "coming home baby" was my early chick introduction

then saw him at the auditorium theater with miles , in 69 , it was wayne, dave holland and jack de jonette, later at the opera house with miles again , in chicago , with steve grossman , jarret , dave holland , airto

saw him at the london house with stan getz, stanly clark , airto and tony williams ..it was one of the most awesome lessons i ever got in how to really play at a restarant gig , be in total control , every moment going somewhere , soft enough for people to eat , but dynamic control that could go from the softest to as intense as any music ever. then they did a drum clinic in the suburbs with tony , stanly and chick , just awesome

i loved his airto hook up , with clark , flora, joe farrell , the records , i was the first chick airto flora copy band in chicago .

then i saw them at one of the clubs , and , airto couldnt make it . some young drummer subbed , named steve gadd , just burned it up .

i saw the lennie white entrance , and they would start burning and then seeing dimeola enter the group .

he did start taking a direction at that time that i didnt want to do . yet , i always respected what he was up to and the players he would use .

there is nothing wrong with saying i didnt love everything he did , but i sure loved his early work

another loss for the jazz world

'Akoustic Band Alive' relaxed me to sleep every night for almost two years. It was my introduction to both Chick, and Dave. I absolutely love that album; time to put it back into rotation, it's been far too long.

Wow! I am in shock. Light as a Feather album was the first time I heard Chick Corea. I grew up on all of his music. RIP
R

News of Chick Corea’s death has been confirmed: the pianist best known for his hit song Spain dies today in Tampa Bay at 79.

Three Quartets, just amazing. It has such a rich sound, and some of Steve Gadd's most supportive and beautiful playing.

I believe Mr. Scott Fish is a long time member here. I don't mean to usurp his valuable contributions in any way....but I thought I would post this will all kudos and ownership to Mr. Fish. Can you imagine Chick Corea changing the way Steve Gadd played drums to such a great extent? I used to go hear Steve all the time during those early years in Rochester and his playing sounded great to me but more be-bop oriented for sure. Thanks Chick, thanks Steve.

Steve Gadd: Working with Chick was Inspiring and Confusing

SKF NOTE: Somewhere along the way I paid $4.98 for an interesting book of music interviews and photographs by Julie Coryell and Laura Friedman: Jazz-Rock Fusion: The People, The Music. Ms. Coryell …

This album was on constant rotation for me for quite awhile when it came out. Still my favorite Chick (and Gadd).

I was fortunate to see him a few times with the Electrik band back in the 80’s and again with RTF a few years ago. He could make those keys express so much emotion. He’ll be missed.

Chick had cancer. Sad news. I ate those RTF albums for breakfast in the 70’s and went further back years later into Chicks catalog. A remarkable player. When Weckl went with Chick, that was it, I was a Chick junkie all over again. He knew drumming too and Humpty Dumpty stands as my favorite tune right along with Spain. Chick man you were special!
Last edited: Feb 12, 2021

Tilter said:
'Akoustic Band Alive' relaxed me to sleep every night for almost two years. It was my introduction to both Chick, and Dave. I absolutely love that album; time to put it back into rotation, it's been far too long.

My god. I worn out a tape copy of that album. Epic record, and I agree, time to put it back into rotation.

Wow long time no hear .missed it
B

Man, "they" are dropping like flies. I love his music. Big fan.

Just devastating. Fortunate to see Chick a few times and it was always uplifting. Chick had a wonderful YouTube channel. Check it out. https://www.youtube.com/c/chickcorea/videos

Huge loss. Beneath The Mask was my favorite. I still have the cassette tape and nothing to be able to play it ...

Here's one that's perfect for all of us.