Chick Corea has passed away

I was fortunate to catch the Chick trio with Brian Blade and Christian McBride here in NY in 2019. What an incredible evening of the highest levels of musicianship on display. Chick's Inside Out album was a huge inspiration and revelation back in h.s. in 1989-90. The '70s recordings are plain visionary stuff. He really pushed himself and the people who worked with him to the farthest reaches of musical potential. Just a brilliant career and body of work. RIP, Chick.

RIP Chick
I first heard your music on the Dave Weckl VHS instructional videos in the 90s and found it intriguing at the time. I know there is a vast body of work that goes with your name and there is a lot to discover. I’m looking forward to hearing your legacy and it lives on on your music.

My personal favorite Chick recording, one of the "later ones" ......

Past, Present and Futures | Chick Corea

This pure acoustic (Akoustic?) record is unique in lots of ways, all good!

I wrote him a letter once at the lowest point in my career, hoping for catharsis, but never expecting a reply. It was a pleasant surprise that he actually did write back with words of encouragement. I wrote again when things started improving, and he wrote back again with more encouragement. Thank you Chick. I will always hold your kind words and your music dear to my heart.

I saw him quite a few times at Monterey Jazz....always a killer show. The RTF stuff stuff is epic, and his earlier stuff with Miles - just fantastic......RIP.

I love this song....so much feel and emotion, it made me want to play Latin jazz.....

Man this has saddened me profoundly. I had many interactions with Chick throughout the years (mostly through interviewing his drummers for various drum magazines) and some mutual musician friends. He even grew to recognize me with that great Boston accent (“Maaaaaark right?) I even got to play drums with him and Jack DeJohnette trading blues choruses at the piano on an afternoon before a show in NJ. He was ALWAYS a wonderful conversationalist, and was inquisitive about anything. (I have tried to adopt that trait.) He was such a classy and very "cool" guy.

I remember a wonderful conversation with him about his new fascination with The Beatles music (of all things) after his son Thad had begun doing the “Rain" production in Vegas. I even (accidentally) got to hear him practice for an upcoming duet gig with Hiromi, because I was “hiding” in an adjacent practice room so the concert “security” didn’t ask me to leave. I told him about it a few years later, and he asked me if I learned anything, I said yeah, “A few new (curse) words!” He roared in laughter, remembering, “Yeah that was some tough music!"

He was hilarious and always very interested in what his drummers and I were talking about, even sitting and listening and even contributing some questions a few times. Chick was a pretty good drummer and (as we all KNOW!) he had fantastic taste in drummers. I still use some of his "lessons" (things that he told me throughout the years about music) in my learning and teaching. He was the consummate student and teacher.

I love to listen to Blue Mitchell’s “The Thing To Do” which was both Chick and Al Foster’s first recording date. Al had told me after he and Chick played a trio tune on a Pattiucci record, that they had been talking about doing a trio record together. Alas we’ll have to put that into the "wish it coulda” file. There is also a very good soundtrack that Chick did for the film “Cat Chaser” that I would love to hear (on it’s own.)

An interesting fact that both Chick and Roy Haynes told me about the Now He Sings record (still my favorite Chick recording,) is that they (Chick and Roy) rehearsed for that recording by playing the music duet (bass-less) and that was why it had that signature "slinky-ness” to the time. Needless to say, I loved ALL of his music, and every one of his bands. But I'll tell you one thing, the week that he gave us The Acoustic Band plus 2 (Wallace, Bob Berg, Chick, Patitucci, and Vinnie) was an all-time memorable week in NYC for drummers.

This has just gutted me, he was one of my musical heroes!
MSG

I would drift off into sleep listening to this on many nights. Evokes a mood.

Shed some tears this morning. I feel blessed to have seen him perform solo, various RTF configurations, with Gary Burton, with Pat Metheny, a few other projects, including a few times at The Blue Note, and many times at the Saratoga Friehoffers/ JVC/ Newport Festival.
Will be spinning discs this weekend in memorial, feel like I lost a dear friend.
P.S. We saw Chick's Electric Group at "The Pier" in NYC and saw the infamous moment when Jaco P ran on the stage and tried comandeering John Pattatuchi's electric bass and got thrown off the stage....eak !!!
Last edited: Feb 12, 2021

Chicks 75th Birthday celebration at the Blue Note. He smiled a lot.
Love how he’s looking at Eddie Gomez. Had a good seat under Steve Gadd’s snare. Wow.
He was a gigantic talent.

Saw him for the first time at the closeout of a high school jazz band competition in 1996. Transcendent. 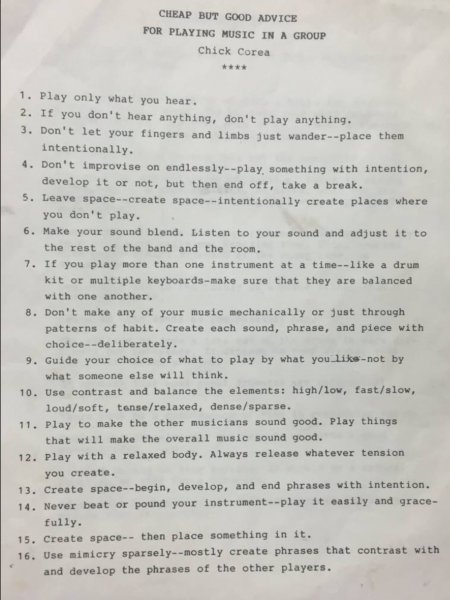 thanks for that find

I am very sad to learn of the news, as this is the first I’ve heard of it here on the Forum.

langmick said:
I would drift off into sleep listening to this on many nights. Evokes a mood.

Friends is my favorite Chick record and maybe my favorite instrumental album of all time. It's perfect (minus the children's songs) and perfectly balanced: three mellow tunes and three barn burners. It's got a real late-night/3am, nobody-here-but-us feel to it - you can just envision the dim lights, full ashtrays, and half-empty whiskey bottle in the room. I'd love to hear the outtakes.

It's really amazing how much a guy more known for playing the piano than the drums influenced so many drummers.
4 pages in less that 24 hours - on a DRUM forum.

A musical giant, beyond genre, beyond his instrument.
The fact that he taught Steve Gadd says something.
Compositions, band recruitment, record production, tutorial videos... a master.

I saw RTF in about 1973 at the Troubadour in Los Angeles.
Very small place. Al Dimiola was reading charts. They were great.
And in Santa Barbara at the University. Truly blow mind. They traded 4's and broke it down to 16th or 32 notes. It blew my mind.
Thank You Chick

Damn - So sorry to hear of Chick’s passing. I had a chance to see him with Gadd at Blues Alley in DC three years ago. The only time I saw Chick live. Absolutely brilliant. Support live music and the venues that host them when they return - and don’t pass up the opportunities to see your favorites while they are still around to dazzle us! 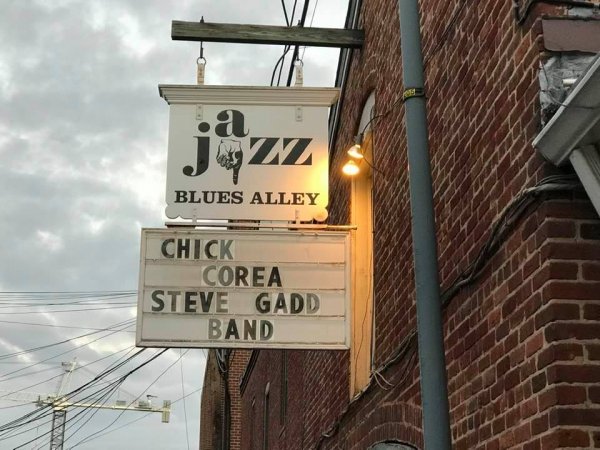 Dave Weckl Is Backl in the Newls