I have a set of Gretch renown maple that I bought about 5 years ago. It has been out of the house maybe 15 - 20 times since then. For the last 12 - 18 months it has been sitting inside my house in soft bags. I just pulled them out yesterday and most of the hardware (lugs, rims) are starting to pit!!! WTF? I know these aren't top of the line drums, but c'mon. Is this common?

So my question is what is the best way to clean these then protect them. I never really did anything in terms of polishing, etc... since when I bought them.

Thanks for any suggestions.

If they're going to spend time in the bags you could buy some bags of desiccant to put in each soft case or maybe some rice, the kind that comes in their own bags that you throw in the pot to boil.

As far as cleaning the hardware, if you remove it all and soak it in dawn dishwashing detergent and warm water and apply a little elbow grease you'd remove anything that might be enabling the corrosion to start, but I think the key is the desiccant, there's an obvious moisture issue when they're in storage.

I wonder if storing them in a place with a dehumidifier (e.g. basement storage room) would also help. We lived in St. Louis for a coupla years, and the only dry spot in the house was in the basement, right near the dehumidifier.

Gator bags? Seamed to be a tread about them causing pitting and corrosion.

With all the rain we have had this spring I run the dehumidifier every day. It could be that some bags hold humidity more than others. As I remember the Gator bags was some kind of chemical issue.
T

000 or 0000 steel wool will get the hardware clean, good polishing with car wax will help prevent further corrosion short term. Long term, clear lacquer if you have the time and skills.

I had my '66 Ludwig DB kit stored in hard fiber cases in the garage for many, many years...and they weren't affected one bit...not at all. That factor, and perhaps the fact that am living in a semi-desert area of Southern california, where humidity isn't really an issue, might have contributed to their preservation.

My son brought them inside my house in December of '07 so I could begin playing again after my retirement in that year (haven't done so since the late '80s, or perhaps early '90s--can't remember now! ), but first gave them a thorough cleaning, buffing, etc., and they look fanstastic spite of being that old.

I also have a Ludwig pre-serial COB ss snare drum that have been stored in a soft case--which in turn is stored in a wooden case--since the early '60s, but the former is made out of a denim-like cloth sans foam-lining.
Methinks that synthetic foam materials might be a contributing factor in retaining a good degree of humidity within "modern" soft cases...

Thumper said:
000 or 0000 steel wool will get the hardware clean, good polishing with car wax will help prevent further corrosion short term. Long term, clear lacquer if you have the time and skills.
Click to expand...

No on the use of steel wool.Using it will leave minute scratches in chrome hardware.A better choice would be a good quality chrome cleaner/polish like Flitz or Semichrome.Hopefully Purdie Shuffle or JR will chime in on this .

[email protected] said:
Gator bags? Seamed to be a tread about them causing pitting and corrosion.
Click to expand...

No, not Gator bags. It was Gator hardcases with foam lining from a few years ago sold in Australia.

You're stuck on the actual pitting, but I use this polish with fantastic results: 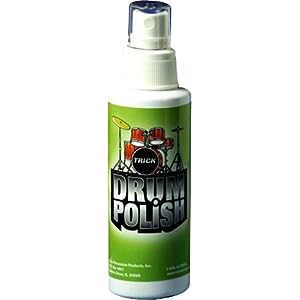 This thread got me further thinking about drums storage, chrome pitting, etc., so just in case I placed a bunch of dessicant bags inside the soft case where the COB dish is stored...

I am big on Nu-Finish car polish for hardware, drum shells & cymbals. This stuff just works. I use it ALL the time on ALL my drum stuff.

Dave H. said:
I am big on Nu-Finish car polish for hardware, drum shells & cymbals. This stuff just works. I use it ALL the time on ALL my drum stuff.

You know, I don't why I didn't think of that either. I'm sure I picked up that tip from DFO too. Nu-Finish works incredibly well at removing all sorts of stuff. I usually apply that first, then the Trick Polish. Trick Polish has anti-static stuff in it so it helps keep dust off for a few weeks after applying.

Dave H. said:
I am big on Nu-Finish car polish for hardware, drum shells & cymbals. This stuff just works. I use it ALL the time on ALL my drum stuff.