Coronavirus and other Off Topic stuff 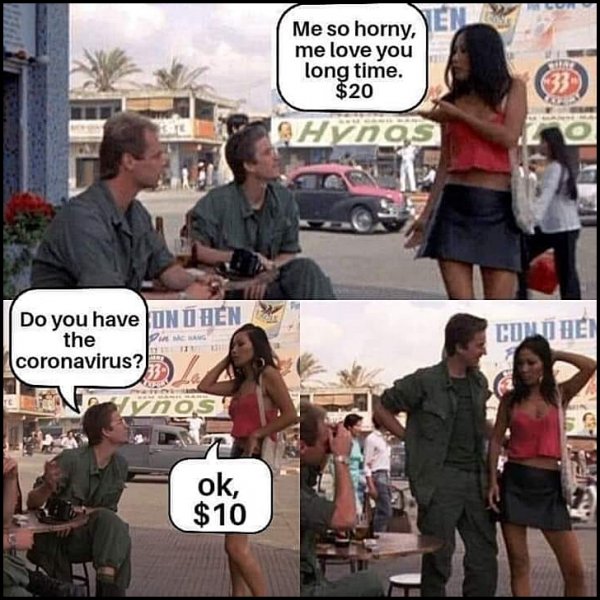 I liked Alan Alda. kidding
I was more a Wayne Rogers guy
M

It's actually quite sad really. I read and hear people freaking out over toilet paper and fighting each other in Australia for packages of the stuff. And I see people who aren't sick wearing face masks even though the health officials have said repeatedly that the masks won't do much to prevent you from getting it but that only those who have the virus should wear them to prevent other people from getting it. And then I read about people who say things are being blown out of proportion. They say this isn't even as dangerous as the common flu. Just as those who are going nuts over toilet paper are out of their minds, so too are those who spit out incorrect data and attempt to equate this with the flu. Here's why that position is complete idiocy. First of all, the actual death rate of the flu globally is 0.13%. And the death rate of this virus based on the numbers we have right now is 3.4%. Now, those who think this is blown out of proportion will say that many of the coronavirus cases aren't even being reported yet so therefore the death rate is lower than what I've stated. That may actually be true. But where thata argument falls down is that of all of you who have had the flu, how many of you have actually reported your illness to the authorities? How many of you even bothered to go to the doctor. I rest my case. So the death rate for the flu is also lower than stated. Set aside the numbers for a moment. This virus is just getting going. It's been in the human population for all of 2.2 months. The flu on the other hand has circled the planet countless times. It's fully saturated the human population. Now, back to the numbers, based on those numbers, the initial impact of this virus is that it is killing people. Over 3,000 dead and it's existed for 2.2 months. And look at the number of people who have tested positive. The numbers for this thing are now 111,753 cases and 3,888 deaths. The number of cases is probably larger and so too are the deaths most likely. But with those numbers it's a 3.5% death rate. So, what's the message here? People need to stay calm and not lose their minds or panic. If your store is out of toilet paper, go to another one. And if you are out and your friends have some, ask them if they can spare a square. And to all you people who claim this all a bunch of nothing, you need to shut your yappers too because you're wrong as well. No, these are not ad hominem attacks. If someone takes a position on something without a single piece of real evidence to back it up, then that person, on either side of the agrument, deserves to be attacked for making baseless conclusions which only serve to spread rumors and yes, fake news. I'll debate you if you can actually cite real statistics and pose a rational argument. But if you just make false accusations, don't get all indignant that someone is throwing ad hominem attacks at you. Those attacks are justified. On BOTH sides of the argument. Peace.

TheElectricCompany said:
Ignorance isn't to be forgiven. You're an adult and should know better. History will be less kind to you than I am, so get used to it.
Click to expand...

You seem very secure in your moral superiority.

Be careful with that....

“Pride goeth before a fall.”

number 1 being mandatory everyone posts their Age in the info Visible to everyone.
I've asked for this since Harry's forum.

"The gradual recovery in the stock market of China has been attributed to a decline in the number of coronavirus cases as of recent. "

oh really well how about that.. How reliable do you really think China's statistics really are? I hope their stats are real and going in the direction they are saying. But our virus cases and deaths are still going up and our stock market is now down 5,280+ points. That's 18% off the DOW's high. There is clearly still cause for concern. Watching and waiting to see what happens next.
M

JDA said:
I think after this whole thing is over there should be some changes

number 1 being mandatory everyone posts their Age in the info Visible to everyone.
I've asked for this since Harry's forum.

I hear you. But I've seen kids in their 20's act more adult than some 50+ somethings. I'm not so sure age has much to do with the tone of disussion. Maturity and rationality can sometimes defy chronological age statistics. I think we should all take what people have to say based on its face. If someone makes a compelling argument and has facts and a rational perspective about it and keeps emotion out of it, for the most part, I'll listen. It's the lack of any basis for an argument that I have no patience for. But hey. That's just me.

MntnMan62 said:
I hear you. But I've seen kids in their 20's act more adult than some 50+ somethings.
Click to expand...

take you as an example Mtman62.

I assume you were born in 62 not that you are 62.
But many times I don't believe it's too much to ask in discussions of Beatles John Coltrane whatever knowing a little - a little- bit about who one is speaking too. thats all. One little tidbit of info
Gives an idea picture sorta better than not knowing nothing