Cymbals that are physically impossible

Does anyone have a hankering for a cymbal that may be physically impossible to produce? For example...

I like the maturity of heavier crashes, but I find they're so damn stiff that they almost cause carpal tunnel syndrome. I'd like to have a very long, almost delayed note without having it too much in "ride" territory or killing my hands to play it.

I love my A Custom flat ride and would almost like a crash that has that same quality (or the same kind of shimmer). Of course, the whole point of a flat ride is to not have it turn into a crash without the bell, but I still love that quality.

I’d like a belled 20” ride that has the properties of a flat ride with good stick pointillism that doesn’t get all Maytag washy, and can be crashed during a pattern, with the crash opening nicely, like a bag of potato chips after a long diet, then closing down politely to allow room for the stick pattern to take over again.

I’d like it to be able to handle soft volume, but also be articulate enough for those pings to weave around guitars if things go up to choogling at around 6 on a Fender dial.

I’d like it to say “Zildjian” somewhere on it, and have been touched somehow by Paul Francis.

I’d like it to make me sound so good I look taller and more handsome, so much so that people like Cindy Blackman come up to me in between songs and say things like: “Damn, it’s hard to believe such a tall and handsome guy like you has such a deep and tasty pocket. You make me want to come back to Zildjian.”

Except for that last bit, I’d like for the above properties can be found in a Staccato Ride.
T

A cymbal so amazing that, once played, ensures that I no longer have a desire to buy any more **** cymbals would be nice.
T

To answer somewhat seriously, I'd love a ride that sounds just like Joe Morello's on Take Five without the sonic benefits of 30th Street Studio recording equipment and engineering expertise (Joe's talent and touch also notwithstanding). At first, this doesn't seem like it should be outside the realm of possibility, but I've yet to encounter it in the wild, including with the reissues. The closest I've heard is probably my Formula 602 Medium 20". It has the right ping and the glassy smoothness down, but the tone is off (this should be achievable) and it's lacking that little hint of, umm, maybe not exactly sizzle - magic fairy dust? - which completes the package (perhaps not quite as achievable).
K

I want a 48" Paiste RUDE GIGABELL... flatride... made of Signature alloy... with silver/chrome finish.

When I first read the thread, I thought of MC Escher Relativity-style stairs, and maybe a cymbal with that geometry would be cool too.

I’d love a ride cymbal with a volume knob.

Hats that make my 16th's Gadson-bouncy...

I’d want a No Bell Ride, the cymbal that just hovers!

I actually have one - a 20" Paiste Signature Rough Ride.
Depending where and how you play it it can sound like a SCDR, an old Turkish K, a China Type or a thunderstorm tearing the corrugated iron roof off a barn... amazing instrument, really unique. Has no right to be able to do what it does but it does...

Someday someone will come up with and actual electric drum set like a Rhodes or electric guitar, where the player plays the actual thing that causes the electric signal. Didn't Kraftwerk make some stuff like that? I think they did, but nobody ran with it, plus they weren't very dynamic.

I want a cymbal with a short skirt and a long....long.....jacket

Is that to much to ask?
T

If you find one, please let me know. I've got my eye on a 22" 602 ME ride, and yeah, that price tag is tough to swallow, especially after having picked up a few classic 602s over the past few months.

tbird8450 said:
If you find one, please let me know. I've got my eye on a 22" 602 ME ride, and yeah, that price tag is tough to swallow, especially after having picked up a few classic 602s over the past few months.
Click to expand...

I'll have to find two then, because I'm buying the first one!

After tons of searching and lots of trial and error my impossible cymbal wishlist is a ride cymbal that has stick definition and crashes well. Doesn’t seem like too much to ask but after a dozen or so rides that have come my way I’ve settled on a Paiste signature dry ride. But it’s still an imperfect balance as it does both well enough but neither attributes would I say is “great” 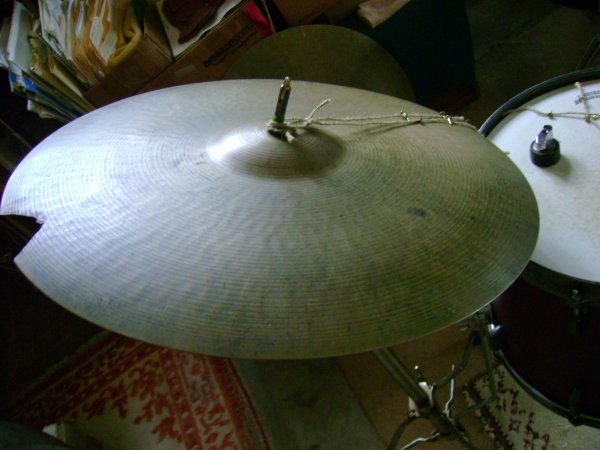 JDA said:
"sometimes they need to be taken out of their original physical realm"

Wow, that's a real beauty Joe. Very lush, glassy sound. How come you haven't sold that to me yet?

I'd love 13" or 14" inch hihats that have the depth and crunch as well as the soft gush feeling of 16" or 17" hats. I once had a pair of New Stamp 13s I never should've sold that really did have this. Of the hundreds of cymbals I've had, they're among those I miss the most.

I've wondered what totally bizarro things could be made thinking of cymbals more like sculpture, with multiple layers and dimensions. Imagine 2 or more cymbals, connected to each other by the bell like, a Pagoda. Like a stack except much more resonant? What would playing the bell tube between each other sound like? They could be made at differing weights so that you can better isolate their sounds while playing the other.

Has anyone made cymbals with multiple bells?

Cymbals with multiple flanges in them?

Or cymbals with spring reverb, either suspended from the bottom surface, built like a bell but with a hollow cavity between the top and bottom surface, and then filled with a varying amount of springs or _____?
You must log in or register to reply here.