Dilemma: Retrofitting an INDE throwoff where the existing holes are HUGE…

I purchased a Tempus snare drum a while ago. I havent used it at all because the throwoff that came on it (A Dunnett model I believe, dont remember which one off hand) was installed so low on the shell that you couldnt get proper snare tension. The straps (or cords) that hold the snare wires on would clear the snare gates in the bottom hoop and then continue straight across to the throwoff. There was no upward pull on the straps necessary to get the snare wires against the bottom head.

The throwoff that came on the drum does allow the entire unit to be raised and lowered on the shell due to the channel in the back where the square bolt heads are. But even adjusting it to its highest point on the shell, it was too low to allow for any sort of proper tension on the wires.

To be extra clear the problem wasnt the throwoff itself. It is fully functional. The problem is that the holes were drilled SO LOW into the Tempus shell that most throwoffs wont work in this situation.

So I decided to get an INDE throwoff. The INDE has an adjustable spacing for the mounting holes which works for this drum due to the goofy, non-standard spacing between the existing holes. Plus the attachment point for the snare straps or snare cords on the unit itself are MUCH higher on the unit in relation to the bottom mounting bolt than a Trick or the Dunnett.

BUT now I have a new problem. The included attachment bolts for the INDE throwoff are a much smaller diameter than the bolts for the throwoff that came on the drum. As such, there is TON of slop with the smaller INDE mounting screws and the existing holes in the shell. Simply put - I cant get the throwoff completely vertical on the shell. So Im trying to think of way to make a hole smaller. (Im a design engineer and Im LAUGHING HYSTERICALLY at the notion of trying to make a hole smaller.)

For those of you havent seen an INDE throwoff, you cant simply use a larger bolt. The design of it doesnt allow for that. (That is NOT a flaw in any way, shape or form. The design is sound and well thought out. Such large bolts are completely overkill for the job at hand.)

So now Im stuck again. Anyone got any ideas as to what I could do to get that INDE throwoff to work? Something I could put in the holes to reduce the slop?

I welcome all thoughts regarding assistance in this matter.

Thank you for your time.

Fiberglass resin filler. Fill in the holes and redrill.

It sounds like an easy fix. Purchase a woodworking dowel to fit tightly in the existing holes. Cut two pieces about an inch long and glue them in using Tightbond II and setting them flush with the exterior. Clean of any push out with a damp rag and let it set up for 24 hours. Trim and dress the dowel to flush with the inside and touch up the finish. You can now drill your holes exactly where you would like them.

I've done this many times anf it works without a hitch. I also bought a set of Testor's model builder's paints so I can mix up finishes to match, but often you don't have to because the new hardware and washers cover it up or the color matches a Sharpie paint pen.

Go to a good hardware store and check out small nylon or metal spacers...ones that the outside diameter will fit the old hole and the ID will fit the screws.

Check your local hardware store for some nylon sleeve washers. Maybe you could find something that will fit snug through the shell and allow the INDE screws to pass through.

When I had to make some holes "smaller" I used aluminum spacers: 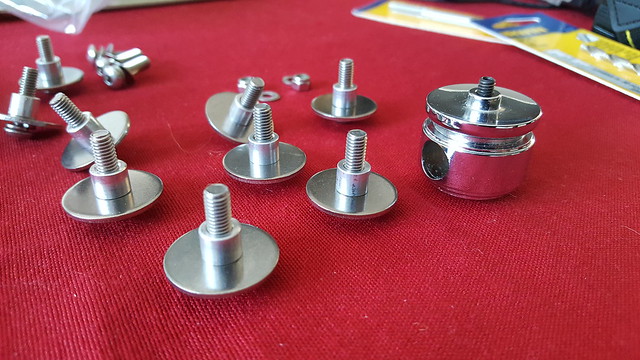 Go here and you will find what you need:
https://www.aluminumspacers.com/

They have tons of sizes in stock and can custom make stuff for you if necessary.

My idea was the spacer thing too....great leads noted above......