I began with a Ludwig Pink Champagne set that just kept getting bigger and bigger from the 60's through the 70's. I was just looking at that Roger's Day post, and the color swatches. I have a greater appreciation for Champagne sparkle today than when I was growing up.

So, my question is, has anyone ever tried making their own sparkle finish: some kind of spray adhesive; somehow sprinkling glitter/sparkles on it; letting it all dry well, then putting a high gloss, water-based finish over it, as many coats as necessary to be able to sand and smooth out? Do you think that's doable? Seems quite doable, to me. It would cost so much less than a wrap and no seams, and you could create just about anything for colors and combinations.

Methinks I am going to try this and see what happens.

If anyone can do that it would be you, REF !

I'd be looking around at arts & crafts suppliers, for ideas

I think it was in NSMD...and I think the guy was in England but he did a Fiesta Pearl that looked great....i think there was a lot of Gloss finish used...

I'd love to know how you make out.

Well, I did a search and found this: 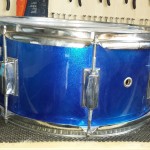 Step-by-step, simple, illustrated instructions for a DIY sparkle finish drum. Easy method to get a stunning effect. Requires elbow grease but no skills.

And Noble and Cooley make their own hand applied sparkle finishes (12).

I restored a badly neglected, over-holed, multi-painted vintage Rogers Luxor shell to a "mardi gras" Powertone. In that process, after shell prep, I replicated a black galaxy finish with silver sparkle, over which the confetti was hand applied. I put an undercoat of flat black paint, then I used silver sparkle vinyl tape I had and applied it over the paint, and then peeled it off. Did that a few times to add sparkle where needed (I didn't want too much, just a backdrop for the confetti). Then, confetti over that, then hand applied coats of poly. Not perfect, but a very fun project and a nice save, IMO. I added extra confetti as it was a one-off drum. I've thought about doing a full kit in this color but the confetti was a real pain to make.

The guy I got the vinyl from (paperstreetplastics on eBay) has many colors and is reasonably priced. He has a "champagne" color but it is not a spot on match for vintage champagne, but it's close......that would be a simple project to just wrap the entire drum, but again, would not be a perfect match next to other vintage pink, but on a stand alone drum, it would be lovely. It's a bit more orange. But the sheets are super thin and he has pretty much every color, and in any size. I have also used them for hoop inlays (he sells 1/2" and 3/4" wide, too). Super easy.

I've thought about buying a huge bag of sparkle and just throwing it on a shell, but it would be too messy, I have actually mixed a ton of sparkle into clear glue, which just left a big mess! They do make glue with glitter in it (at any craft store - Michaels, Beverlys), but only in red, silver, blue or yellow gold so I've never tried that.

Bottom line, it is totally do-able, but I have yet gotten to that point. Frankly I don't think I could make it look anything close to what it should.....I have a large roll of silver sparkle and will be putting a mini bop kit together (10/13/14" bass/13 snare) and may wrap them all in silver.........versus "hand-making" a silver sparkle..... 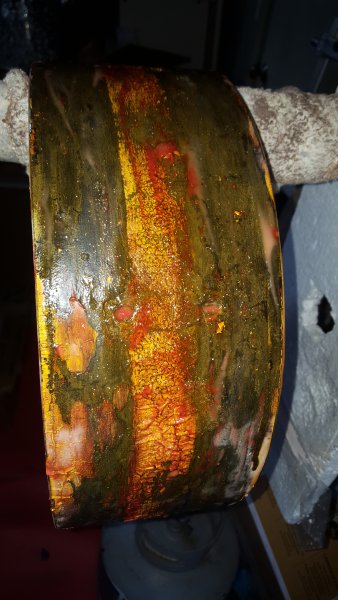 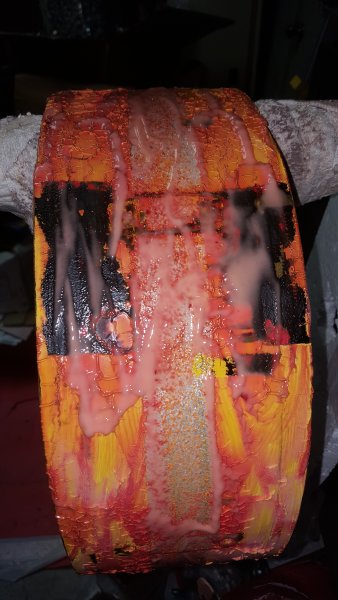 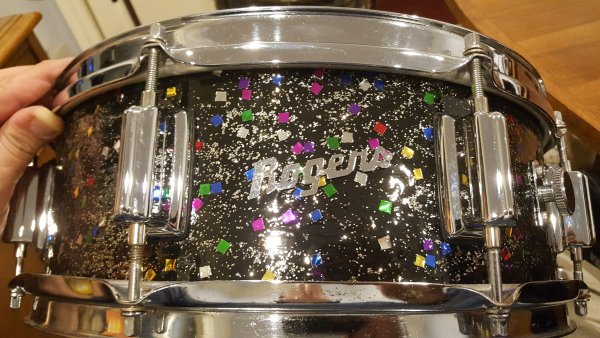 Yep... the process is not complicated, it's just a matter of using the right material to achieve the finished look one is after. We all know that every sprayed glitter finishes is done the same basic way, it's just about the techniques and material.

I liked the guys article very much, I enjoyed the read and thought he did a nice job. While the finish top coat is not what I would want based on my own taste, I still thought it really was an outstanding job for a DIY project.

My building days were done with nitro then polyesters and I have never used the high impact auto style products in the market today (not at a serious level) but that seems to be the go to for sparkle finishes today. Here is my custom Punkinater series sprayed "vintage sand" finish by Pelfrey Drum Works here in the Chattanooga area.... sprayed a black bases coats, applied the glitter, then sealer and several top coats before sanding back and buffing... it's stunning in real life!

And I LOVE that drum JDG... outstanding work!

My "sand" finish with just the glitter, not top coat.... 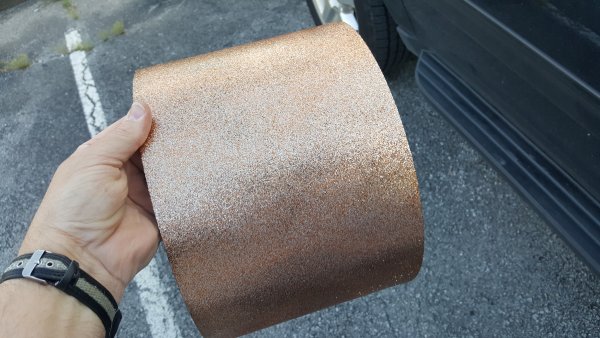 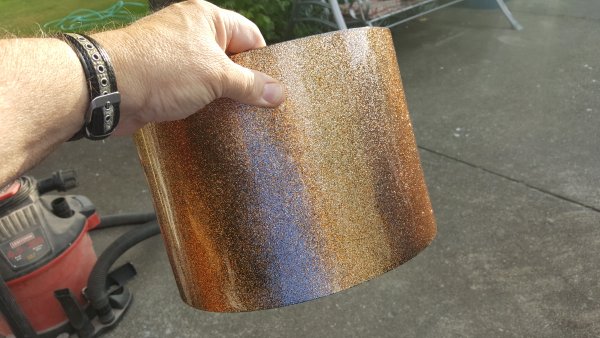 Finished drums... Jerry (the builder) is on the left... 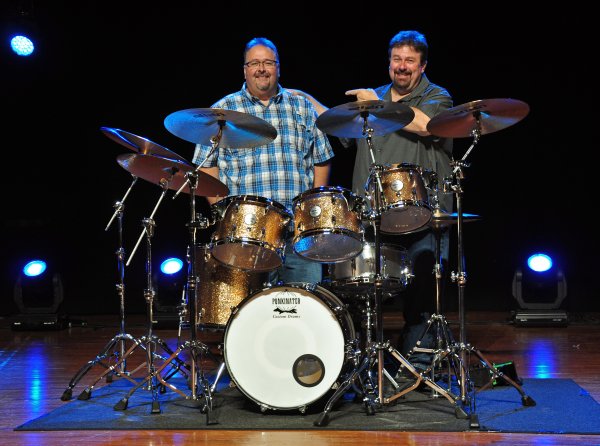 I sprayed Krylon primer over the existing wrap followed by Krylon Glitter Blast rattle cans. I first tried Deft lacquer as a clear coat but the flakes were too big to allow a smooth finish when sanded. Switched to water-based poly and still had a lot of flakes poke through but left it as is. 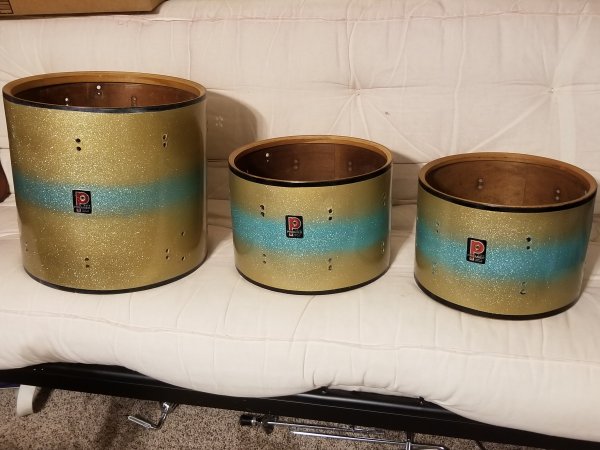