Cars today have back up cameras , electronic lane change warnings, keyless entry and a lot of other things too . Do they make me a better driver ? Yes no maybe .
Click to expand...

Are jazz keyboard players not as good as

Cars today have back up cameras , electronic lane change warnings, keyless entry and a lot of other things too . Do they make me a better driver ? Yes no maybe .
Click to expand...

Are you a worse keyboard player if you don’t truck in a grand piano for the gig?

Instruments don't make players any better or worse than they already are .

Trends in sonic texturing is not new . Hendrix and the Cry Baby , Ray Charles and the Fender Rhodes , Miles with his mute and now jet age hybrid drumkits .

I just don't care enough to go out and $pend on electronics but who knows? maybe an opportunity will present itself where I'll be required to invest in a more contemporary outfit . I've used electronic drums for shows before ... not my cuppa tea , but it was necessary for that particular artist's material .

I took a job as a trail guide in the Rockies on horseback, worked at a riding ranch too , so horse and buggy is nothing new to me .

audiochurch said:
i want to add a trigger pad simply to have a variety of clap sounds available. having tablas, congas, and dogs barking would be cool too
Click to expand...

Get a Roland SPD One wave. I needed exactly the same thing, a nice clap sound. You can load 10 one shot sounds and it’s really small and only $150.

Vistalite Black said:
1. "They're pointless in the studio most of the time ... A hybrid kit rarely serves much purpose in the studio)
Click to expand...

I'm beginning to see what might be the problem... you don't really read other people's posts... because if you had you would've read the the explanation of that - rather than just skimming for the things that you can make your argument with.

Hybrid sets serve little purpose in most studio situations - because the things we do with them are best done other ways... in the studio. Now this wasn't always the case - back when few had access to samples and all of this was so new. But now everyone has drives full of samples... everyone has easy access to drum replacement (or doubling software)... and it all works better and more reliably and with more control downstream - than most anything we can do from a hybrid kit.

If could on and explain further - but you keep busting me on word count. But if you're not following what I mean by all that and how it has drastically changed studio work - just ask. Just don't ignore it as though I never wrote it (twice now).

2. "For regular gigging, they are a huge extra pain ... too much work for too little benefit."
Click to expand...

Well "regular" was a bad word for that - because there's a ton of different "regulars" out there. I should have said for a lot of gigging, they are a huge extra pain. Because not because I don't like them... but adding electronics is an additional amount of work - more schlep (I need power - will the monitors suffice or I need to bring something, so that my electronic fit in with my kit acoustically on stage). It's just more work. Fine if the music really needs it - and the PAY justifies the extra effort.

Just because there's handclaps on the record, doesn't mean a live performance of a song will suck without them. Just like it won't suck without the uptime tracks of extra guitar parts the live guitarist ain't going to cover - or the four triple-track girl background singers that aren't on the gig, nor the half dozen keyboard sweetening parts that won't get played.

I don't say those electronic sweetening drum/percussion parts aren't important to the record. And I'm certainly not against how they are made (I do it all the time). I'm just saying that on tons of run-of-the-mill live gigs, they are just not necessary. Just as there's no need to swap out bass drums from song to song - it's a live performance... bands IMO should not try (and always fail) to be juke boxes - but rather focus on being tight, kicking bands.

Which is utter nonsense. Even more so now that I've taken the time to explain... but that's right, you're not interested reading anymore - you just seem to want to stick with your original erroneous conclusion...

So, we're at an interesting crossroads. I said "most pros (under 60) have gone hybrid" and when challenged, provided a multiplicity of actual evidence to support my statement.
Click to expand...

But again - you didn't. You presented evidence that some... that lots... that many... take your pick.... but most??? Again you just don't seem to grasp just how many pros there are - and how many forms they come in.

You reacted with a novella on your life and some Disney on Ice videos I'm never going to watch.
Click to expand...

See? Like there... Pro work... that falls outside of your particular slice of music you favor and you could care less.

Which is fine... I could care less how much variety of music interests you or not.

I'm sorry VB - but ALL pros under 60 don't play what you like or seem to have any respect for. But they are still pros.

If you want to exclude them from your proclamations - then do so! But you didn't (and you often don't) and that's why I busted your chops over "most".

Anyway fine article - and your added research in your response was great as well - but that obligatory sensationalist, exclusionary, "jump to a far bigger conclusion than the the article does" set up line... not so much.
Last edited: Apr 7, 2020

Skyrm said:
David, Enjoying your thoughts (and playing) as always!

I too bought Syndrums when they came out. Ended up only using them for weird sound effects and selling at a 50% loss a few years later. Should have kept them in storage, as I'd probably make a profit now.

Also tried Simmons SDS-1 and EMU for gong, tympani, and claps, etc... Never stuck with it though. And I'm 58, thus throwing off the percentage!
Click to expand...

I actually still have my Quad Syndrums - went to sell them years and years ago... put them in the Recycler (California's Craigslist before Craigslist) for next to nothing and no one even responded. Now they've become a coveted rarity (probably worth $2k-$3k). So I fired them up and no go. They show all signs of the caps being dried out - so they need to be refurbished. I might take it on myself - but more than likely I'll send them to a tech for hopefully a few hundred bucks - and then sell them (I really need to get on that)

I've never been one for selling drums - have most all of everything I've ever bought - but electronics... thankfully most of those just came and went. Some even before they were worth nothing. Simmons SDV, Synare3 (2), Synare Seq., Emu Drumulator, Roland RD-8(?), Roland DDR-30, Emu SP-12, drumKat (still have and use), Roland OctaPad, Akai S-900 sampler, Roland 760 samplers... leading finally to the soft synth world and no more electronic drum hardware (if I can avoid it)...

Thanks - that was a fun promotional tour for that CD.
N

David. Don't waste your time being drawn in by this generational bickering twit who's main doctrine seems to be, "young people are smarter than old people!"
D

DCrigger makes some good points. But gotta go with VB on this one. After all, he is a 50 year old (over the hill hipster?) who goes to metal festivals, as he points out in every thread.

And he drums in drum circles. 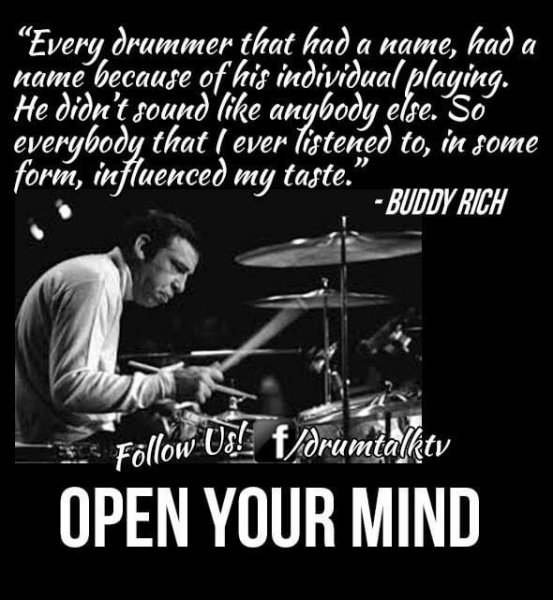 It really was, and the lyrics seem poignant and applicable to today, perhaps.

Frank Godiva said:
how times have changed where guys make such an effort to sound exactly as close as possible to someone else when things used to be the exact opposite

I think Buddy was referring to guys in Original bands not your classic rock drummer making $50 a night across town .

Well, those of us playing vintage acoustic drum kits are at least WAY more modern than violinists. Those idiots are REALLY living in the past. Just look at this piece of outdated rubbish. It doesn't even have an internal pick-up: 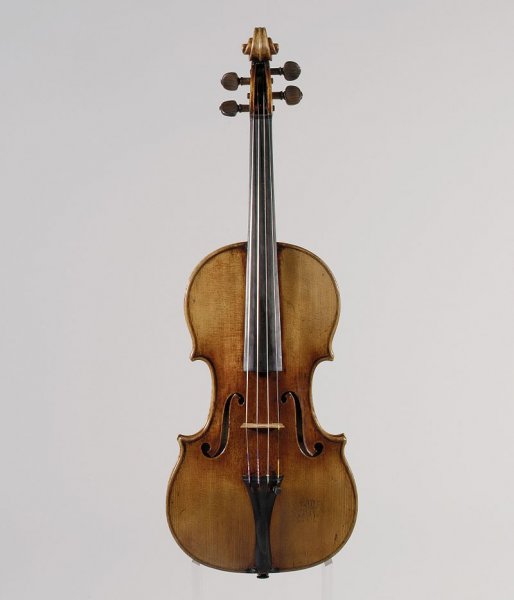 dcrigger said:
Thanks - that was a fun promotional tour for that CD.
Click to expand...

I will second that. Wonderful performance!

Vistalite Black said:
Wow. 1,688 words this time (my computer counts them for me).
Well, I guess I was right about you being fiercely resistant to actual evidence.
Congratulations, but having great experience doesn't make you less wrong.
You reacted with a novella on your life and some Disney on Ice videos I'm never going to watch.
Click to expand...

How to Tell If You’re a Jerk - Nautilus - Pocket

If you think everyone around you is terrible, the joke may be on you.

Just depends on if you need electronics for the gig or not. Most modern pop/electronic stuff does require that but plenty of other styles don't.

This what it’s about for me for the last 3 years except for my indie pop band having a reunion. The interesting thing is a lot of the bands my indie pop played with that are still playing now have an electronic edge. 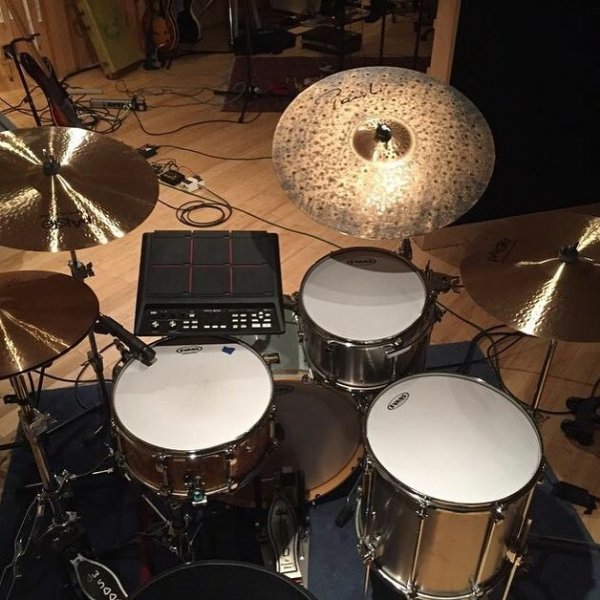 How to Tell If You’re a Jerk - Nautilus - Pocket

If you think everyone around you is terrible, the joke may be on you.

That was interesting .
C

Agreed, yes, that was.

I went hybrid for a completely different reason. I like brushes. In my last band I exclusively used brushes UNTIL we started gigging once or twice a week. I encountered some stages so small that I couldn't bring a regular kit. I started using a Roland Handsonic with BD and HH triggers. Then we had a gig at a very nice venue with a big stage, BUT my truck had been totaled and the rental was too small to put my bass drum in so I brought the whole kit except the bass drum and used my Handsonic and BD trigger as a replacement. Since it was there, while still holding the brushes, I stuck out a finger for ride cymbal patterns on the Handsonic. I could do matched volume "stick" rides, crashes, toms, snares, cowbell, etc.

So now my go to kit is a snare drum, hi-hat, 1 to 3 cymbals, bop BD with a trigger (replaced with a Roland KD9 for tiny stages) and the Handsonic. Smallest lightest drum kit ever with the greatest variety of sounds ever, in my experience. I have songs where I use an African water drum, congas, that and much much more in the Handsonic.

Note, if you are interested in the Handsonic get the HPD-20 as it's the first with the Roland Supernatural sound engine which gives you incredible natural cymbals.

Tama CW said:
Why don't we have hybrid guitar, piano, trumpet, sax, string bass? The technology must be there. Why bother to learn how to play a difficult hand/fingered instrument if you can just push buttons instead? Apparently the full acoustic must offer something that hybrids and electronics cannot. Maybe the day is coming when the Boston Pops is just a conductor with a keyboard + amps + speakers. As long as he uses the wand I'm good with it.

Huh? There are electric versions of most of those instruments (not sure about sax).

Hybrid kits just add triggers and pads to create different sounds to add to the acoustic kit.
You must log in or register to reply here.

M
Issues with Ludwig Atlas Mounts - anyone else?