I think it was a wood finish, perhaps Millennium Gloss? They might have ended up in Norway or something...

Erskine has a mild success with selling his gear.

I’m fine if people want to drop weighted coin on memorabilia. They are often keeping and preserving and maybe even playing these pieces with great love and respect.

But there is no piece I’d seek out. I don’t have the money or the interest.

And let’s say I land Steve Gadd’s Supra. Cool, but it may not be much different than my Supra and it’s going to depress me how brutally l still sound like busted booty old me on The Holy Supra.

thejohnlec said:
Contemplating this, I guess I wouldn’t make a purchase based solely on who owned the instrument. If money did happen to exist specifically for that reason, I guess it would have to be a snare drum owned by a player who made a pivotal change for every other player. Ringo, Buddy, Tony Williams, and other players upon who’s shoulders everyone else stood. That way, it’s a true historical piece rather than just a sample of ownership. For a different example, I’d take a Strat owned and played by Jimi Hendrix rather than Stevie Ray Vaughn. It would also have to be a useable snare because I don’t like owning shelf dwellers
Click to expand...

You don’t think SRV made a pivotal change ?
T

ThomasL said:
I think it was a wood finish, perhaps Millennium Gloss? They might have ended up in Norway or something...
Click to expand...

Or red? Hard to recall, together with Fitzy you went through most of the finishes

ThomasL said:
Or red? Hard to recall, together with Fitzy you went through most of the finishes

Coulda been red. Pretty sure I never had a gloss maple, though I did have a satin one. If you really want me to I can send you a link to a photo album of all the drum sets I've owned and maybe that'll jog your memory. No? Didn't think so.

Neal Pert said:
Coulda been red. Pretty sure I never had a gloss maple, though I did have a satin one. If you really want me to I can send you a link to a photo album of all the drum sets I've owned and maybe that'll jog your memory. No? Didn't think so.
Click to expand...

White Satin Flame armada you had at one time. Moment of Silence please. 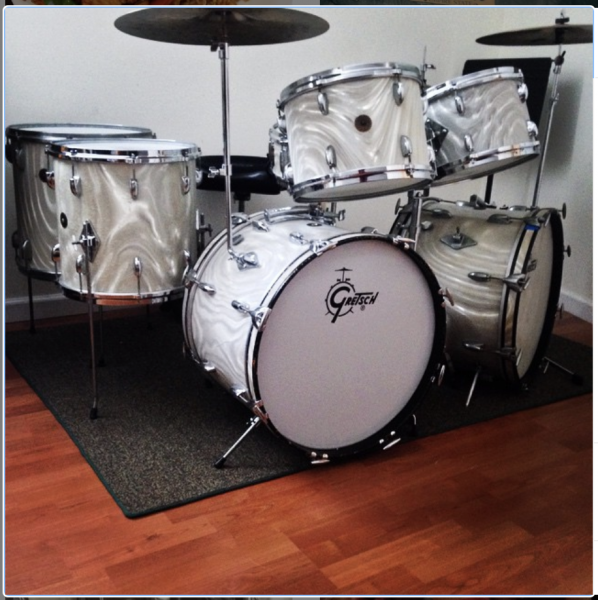 Relevant to this thread - I just came across this seller on Reverb. They have drum heads for sale signed by everyone under the sun.

To answer the original question; no, I wouldn’t. The only thing I lusted for once was Bruford’s Ludwig Super Sensitive from King Crimson ‘s Red era. But then I’m not a collector and to have a drum collecting dust on a shelf I’d never do. So most likely I would have ended up using it.

I would not pay a premium for a piece of drum gear that belonged to a famous player. I wouldn’t even go out of my way to own a piece at a standard price.

In fact, about 4 years ago I was In the market for a set of 15” RUDE hats. I came across a set on Reverb that had Stewart Copeland’s signature in white sharpie for, I don’t know, $200, which is a fair price for those hats. When they came in I removed that signature with some acetone.

I’m not saying the signature was legit or not, only that I didn’t care.

By my outlook, it comes down to what I consider it means to be a man, and probably a byproduct of my years in the Union where you learn never to be deferential to anyone.

You’d never catch me asking another man for his autograph, spooning up next to him for a photo, waiting in a line to shake his hand or paying extra money for something just because he owned it.

To me, that is all an insipid weakness that should be rooted out and crushed under heel.

halldorl said:
To answer the original question; no, I wouldn’t. The only thing I lusted for once was Bruford’s Ludwig Super Sensitive from King Crimson ‘s Red era. But then I’m not a collector and to have a drum collecting dust on a shelf I’d never do. So most likely I would have ended up using it.
Click to expand...

That'd be the thing for me-- I even have a hard time keeping an extra snare drum or flat ride I don't use much around the house. I think the "cool" part of owning that stuff would wear off very quickly and the items would soon become a burden. And I'd never want some sort of "trophy room" where I keep all my stuff on display, either. Ew.

I would not pay any kind of money for gear that belonged to a famous player. In fact I even struggle to buy gear that is endorsed by some player or has its signature on it! 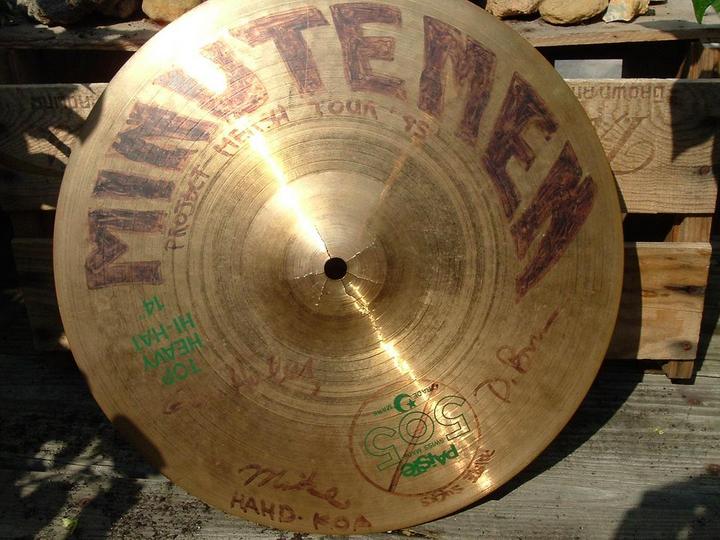 That is a great piece!

ah ...forgot about this one...i guess i have spent a couple of bucks on something....(post copied from another forum im on):

Since I was called out of drumming retirement a couple of years back, Ill admit attention to my guitars has waned. Recently, Ive been doing my best to correct that and have been playing quite a bit more.

This one has been seeing the most action: 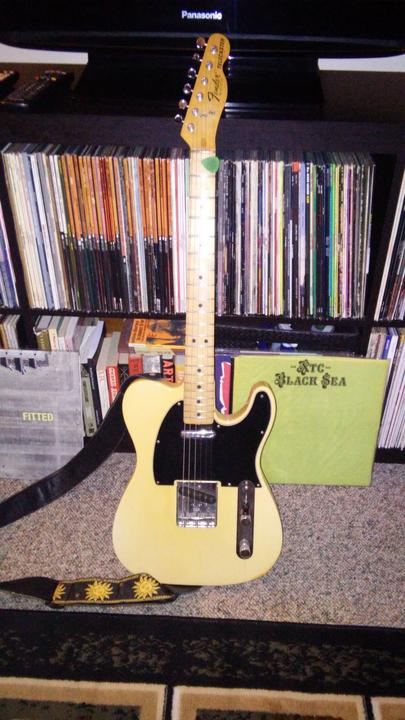 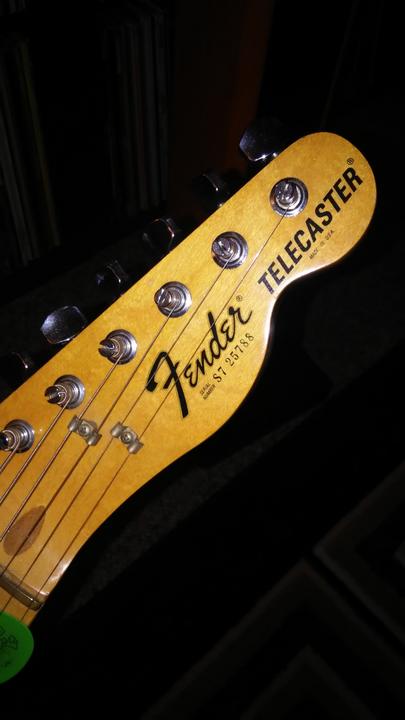 A mighty fine '77 telecaster, especially since the drummer owns it!

It does come with an interesting history, though..

Watch it being played by Dave Gregory here:

A good friend of mine posted somewhere on faceb**k about it...maybe an XTC collector's site? Dave Gregory was kind enough to post a reply about it's history while in his possession.

Here's what he posted:

" OK folks, now stop yer yakkin' and listen up. Fender Telecaster, ser.# S 725788 was my guitar. Made in the USA in 1977. Bought used from a shop called Tempo in West Ealing, London, summer 1980. And it's blond, not Olympic white, and it's a heavy one. Taken from the shop directly to the Townhouse studios in Shepherds Bush where XTC has just started work on the album that would become 'Black Sea'. Didn't care for the stock pickups, so replaced them with a set of Seymour Duncan 'Broadcasters', which had flat magnets on the bridge pick-up; very bright! It was intended to replace my old Stratocaster for touring purposes, as it was easier to replace if damaged or stolen. I liked the easy access to the volume control on the Strat, so re-jigged the Tele control plate with the volume control at the front and the switch at the rear. I used it on the record, and all the tour dates throughout 1980. Much later, I saw a new Schecter Tele-style guitar in Kempster's shop window in Swindon, !
which I wanted so bad, so the blond Tele was traded in; though not before I reinstalled the factory pick-ups and control plate. That was in October 1982, the last time I saw it. Some years ago somebody sent me a link to an eBay listing where it was for sale; I believe someone in the States bought it but who sold it I have no clue. I still own the Schecter guitar; in fact, it's used on stage by Rikard Sjoblom with Big Big Train, mainly in 'drop D' tuning, and featured on our recent UK tour"

It still amazes me that it is mine.

underratedcowbell said:
I would not pay any kind of money for gear that belonged to a famous player. In fact I even struggle to buy gear that is endorsed by some player or has its signature on it!
Click to expand...

I hear you. Back in the day (80´s) my fav stick was ProMark 707 hickory. One day I came into the drumshop to buy a brick but then they had "Simon Phillips" all over them. I stopped using them. I was young at the time but I have always had a hard time using signature gear.

Any rockstar or other "star" drummer gear could get possibly 200% which is twice the normal rate. What would I actually pay a premium for? I dunno. I would be interested in Elvin's drums for instance but I think they are priced way beyond that 200%. So there you are. People will pay what they will pay though. There are quite a few people with money to burn, who are also fans of certain drummers. You do the math.

I pretty much lean to the side that isn't impressed by gear owned by someone famous. I think the "magic" related to a piece of gear is tied to the person, and coupled with a particular time & place...once that window passes, it becomes just another piece of gear.

Years ago I had a back & forth with a seller on CL over a Tama Superstar factory custom 8 x 14 snare (extra thick shell) that was used on a late 80s David Bowie tour.
Seller was asking about twice what it was worth, when I counter offered with what I thought was a fair price, he replied "But this was used on a Bowie tour!!"
I replied sarcastically, "That's OK, I may buy it anyway."
He went radio silent for a few days, then contacted me and accepted my offer. I guess the Bowie connection didn't help on this one.
Great sounding drum, still have it... and that snare does show up in a few Bowie tour photos from the late 80s (w Omar Hakim playing it)
You must log in or register to reply here.