Drummers that used bigger cymbals/drums live but smaller in the studio.

I have used a 22" bass drum in the studio, but I typically play with a 20" bass live. I do it simply because the smaller bass takes up less space in my car, is easier to position my rack tom, and I'm used to it. I do love the low end thump of bigger bass drums.

I don't think Randy Castillo used this... behemoth in the studio with Ozzy. 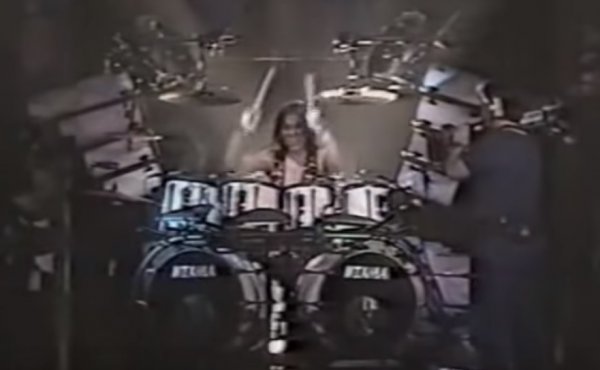 But he used ALL of it live, during his solo:

I remember an interview with Dale Crover where he said he often used a smaller bass drum in the studio.
L

singleordoubleheads said:
Didn't Bonham use a Slingerland 13/16/22 for Zep 1?
Click to expand...

Good post, though I think the info about Simon Kirke's studio setup is a bit off. Here's a MD interview from 1983:

MD: You said that when Bad Company was formed, you decided to change your kit.

MD: What make were they?

SK: Ludwig. I had an endorsement with Ludwig, but now my contract has run out. I can say that they were very good drums, but my favorite make is Gretsch. I’ve got some which I use in the studio. Practically all the Bad Company albums were done on a Gretsch kit; a small kit because you don’t need big drums for recording.

SK: A 22″ bass drum, 13″ tom, and 14x14 floor tom. With the recording facilities these days, you just don’t need a big kit. The only concession I make in the studio is to take off the front head for the engineer’s peace of mind. When I was first told to do it, I told them to go and stuff themselves, but I realized soon afterwards that it was necessary to get the microphone inside the bass drum, facing the batter head.

Ian Paice kit owned by Paolo Sburlati. Great photos of Ian in action and the kit itself and some bio info. 10x16 tom on a snare stand. I don't think that snare stand could have held a larger drum.
Paolo had a book called Ludwig: Yesterday and Today. Worth tracking down but I recall Bun stating that the binding left a lot to be desired.
http://www.ludwigdrummer.com/Articles/Mini Article on Ian Paice Drums/Ian Paices Drums Mini Article.htm
You must log in or register to reply here.
Share:
Facebook Twitter Reddit Pinterest Tumblr WhatsApp Email Link