Ok,
So I wanted an older MIJ Starclassic Bubinga kit. Except for little things, like Paiste cymbal cleaner, I've never purchased anything of real value. So I saw a kit, the ad said Copper Sparkle mint condition SC, 5 Piece, with 22x17 inch bass drum. It was more $ than I'd normally pay, the seller had a perfect rating, and the tom sizes were cool.
So, I figured what the hell. There was no auction, only buy now. I went ahead, and pulled the trigger, as it was pretty much everything I was looking for.
Hindsight being 20/20, I should have posted pics of the kit before the purchase.
Well, it's a small world! I posted pics of the kit later that day, and I get a reply from the original owner.
I was told it wasn't Copper Sparkle, but rather Marigold Sparkle, and the bass was 20x17, and not 22x17. Being color blind, it looked orange to me, so I looked up the Copper, and it was more along the line of what I wanted.
Anyway, the kit came, and I immediately went to look at the bass drum. Whenever I have anything of value delivered, I always vid the unboxing. I pull out 2 toms, and than the bass. Yip, it was a 20. I was pissed, as a guy who's been selling drums should not confuse a 20 for a 22, and if they list the finish, they should know the difference.
Here's when it gets crazy. I immediately called Ebay to let them know I got something not as described, and wanted it documented. Next I contact the seller, and get no reply until the next day. He tells me he's on the way to the airport, would be arriving late, and would call me the next day.
Next day came and went, with no reply. I'm pissed, and stressed at this point! (There's more to the story, but I'll hold off until this is resolved).
Turns out the guy's flight was to RUSSIA, where he just moved. He let's me know the time difference is 9 hours, and he gets off 3AM Russia time. I had a jam/rehearsal last night, so I wouldn't be able to take the call.
Well, I got a message saying he'd make it right, and not to "threaten"?? I never threatened the seller, unless he was concerned I would??? (Odd)
I only unpacked the 1 box, and want to send it back to free up my $, as that Recording Custom looks very nice . I would have grabbed that kit already, along with a real nice Paiste ME crash.
So I guess we'll see what happens. I doubt he wants it back, and pretty certain he doesn't want to pay shipping to Russia?
The kit is in great shape, and sounds great, as the original owner sent me a recording of it.
Well, hopefully I hear from him soon, as I will have to dispute the sale with Ebay, and my CC co.
Now I wait and see. There's no way I'm keeping this kit, unless it's made right.

I think that if I were in your position, given the unusual situation, I'd ask for a partial refund - enough to compensate for both the wrong BD size and finish. Then I'd either play them as they are, or flip them.

Radio King said:
I think that if I were in your position, given the unusual situation, I'd ask for a partial refund - enough to compensate for both the wrong BD size and finish. Then I'd either play them as they are, or flip them.
Click to expand...

Yep I agree. Otherwise it becomes a whole thing. You dont want that
T

Yeah, that's what I was thinking. To ship to Russia has got to be expensive (although I haven't checked) I paid more than I normally would, and it left a bad taste. I'll update after we speak, and see what he's willing to do.

Ebay is on your side. Improper description. Ebay's policy is to ensure customer satisfaction when the seller messes up.....even if the seller refuses to do anything or disappears....Ebay would normally cover the return shipping. But shipping to Russia might be a stretch. All parties would rather find a solution other than shipping. Seller's fault for "assuming" everything was fine with the kit transaction before leaving the country.
Last edited: Jun 11, 2019
T

Good point. I'm going to get an estimate on the shipping cost. Being I don't know what part of Russia he's in, and I'm sure that will have a huge effect on cost, I'll get an estimate to Moscow.
What would happen if he just stops responding? Or if he wanted me to send it to someone other than him, from where it was sent?
Has anyone ever shipped overseas?
What bothers me most, he knew the color, and size was wrong. If a buyer spends good $ for that kind of kit, did he really think he'd pull the wool over anyone's eyes?
It's also crazy cool that the original owner gave me a heads up. That's a good guy, looking out for a fellow member, drummer.

Figure out a rebate you'd be satisfied with. It should be fair though. Seller will probably try to throw out a 5-10% "bone" which may not be enough imo. Also figure out what you would net if you had to sell in the immediate future. Another option might be for you to put the kit right back up for sale on EBay with them knowing this is an alternative to shipping to Russia. Whatever you net after expenses.....is what the seller owes you. Ebay should allow a free listing if they aren't willing to cover shipping to Russia. I suspect you're looking at $300-$500 to ship. And then there's the potential import fees. A number of options here. I looked into shipping a snare drum to Europe and that was $83 via USPS. Ebay might have connections to get a big reduction on shipping fees.

If it's wrong its wrong. Size and color should be enough of a basis. If the guy has moved it's HIS problem not yours, and HIS extra cost to ship back. I am sure you will only need to ship to Kentucky and eBay global shipping will handle the rest.

You overpaying is on you, but it happens. If it was a 22" and copper, would this be a "check out my sweet new kit!" post? I don't get "making it right" here....what do you want from the seller? I'd start the online return process asap and not wait because there's another right kit out there for you.....
Last edited: Jun 11, 2019

I was looking at that kit on ebay and coveted it. Love the color and the sizes, even with a smaller bass. I’d take it off your hands but I don’t have the money any time soon.

Need more details. Auction link etc.
Most expensive thing was a bottle of Paiste cleaner?
"Except for little things, like Paiste cymbal cleaner, I've never purchased anything of real value "
What?

Yes, get a rebate and ..you'll probably end up loving this kit.
Let us see the link.

You didn't get what you ordered. you simply initiate a return using Ebay's structured procedure. It should begin on the page with your purchases are listed. Once you report the reason for the return, they handle the rest. You return it and the seller or Ebay handles the return costs. It's actually a pretty simple system and works. 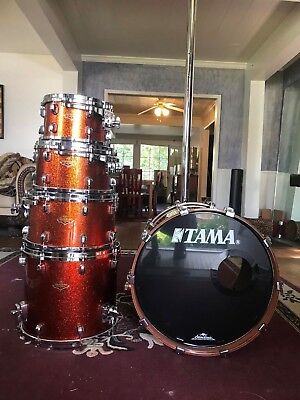 Tama Starclassic 100%25 Full Bubinga 5 piece - Japanese made. Such a beautiful set! both visually and sonically. They are all very different and especially they cost very different. These are the highest end of the Starclassic series.
www.ebay.com

yes he screwed you but the drums might not - and if you get a rebate- you may end up good shape.
Seems like when their location is " Los Angeles" folks get screwed.

i'd rather have that set in smaller sizes. You have to carry em.

As everyone has stated, you are protected by eBay. If the seller doesn't resolve, you get your money back and the seller and/or eBay will have to figure out how to proceed. Don't stress it because it shouldn't cost you a thing and you should get your money back. Be patient though because it might take some time. I had a similar issue a couple of years ago with another item and in the end, I got my money back and the seller figured that it was more expensive to ship the item back and they simply told me to keep it.

As mentioned (have been on both sides of this ebay horror) Ebay will make it right and shipping won't cost you dime. Wrong color, wrong size he fk'd up not you.

A 20” BD instead of a 22” would have been a stroke of good luck, in my book — and I was also eyeballing that kit, actually. Really interesting sizes all around, if I remember right.

But yeah, it sucks that it isn’t what you wanted.

Don't forget, he lied to you once, don't start believing him now. Start the return process.
T

Thanks for all the feedback. I did call Ebay that day, and I was told I had 30 days.
I'll accept the shipping to Russia price off, the fact he's tied up a good amount of $ I have aside for music purchases (like I mentioned, I would love that Recording Custom, and Paiste ME).
If he asks me to send it to someone else, I don't like that idea, as they can say it came back damaged.
Bubinga, as you guys know is heavy as hell, and if this guy is in somewhere other than Moscow, the shipping is gonna be a fortune. I have a feeling he paid less than 1/2 what I paid. So, if he's willing to break even, I'll go ahead. I'd end up with a good deal, he wouldn't lose $, and we'd both be content.
Well, this was a valuable lesson. Seeing a perfect rating with over 600 transactions, tells me something is wrong.
I did not like the dishonest. I found out he was being dishonest (well 99.9%) sure. I believe he sat on that kit 2 years. I think the offer I'll make him will be fair. In my mind anyway. That was also the first time I acted on impulse, not really concerned with it's price.
Geez, if anyone has seen how much some people are charging for made in China Starassics, it's getting out of control. Ine guy has a 5, maybe 6 peice listed for 8k!
Bubinga kits are definitely appreciating fast. I'm glad I started grabbing them when I did.
Yeah, again the dishonesty from the seller is not cool. If I don't hear from him today, it goes back!

Fight to get a rebate...then love the set.

Where's the pics of what you received?

Toast Tee said:
There's no way I'm keeping this kit, unless it's made right.
Click to expand...

What, for you, would make it right?
You must log in or register to reply here.

Have You Ever Spotted Counterfeit Drums?

People that take apart drums and sell the pieces are horrible humans.
2