So I have a 1969 super sensitive shell. It is totally beat up with chrome only on the edges and the majority of the shell is flaking and pitted. I scored some bow ties, slapped on a P85 and a P32 and made a sweet Supra conversion. I actually ended up sanding the shell to make it smooth and put on vinyl wrap to mimic black Sparkle. It's been great so far.

Today I was pressure washing my driveway and had a crazy idea. Maybe I can use the pressure washer to chip away the Chrome sort of like sandblasting. I dropped what I was doing and took everything off the snare and ultimately tried my method. It did absolutely nothing! I was using a gas-powered 3100 psi commercial washer so I figured it had some really nice power. However, it didn't do a single thing on the shell which was a big bummer.

The bonus is that the pressure hose burst and I couldn't finish my project and now I have to reassemble my drum, too. Figure out how to finish that job one way or another because they wrap is lame.
Oh well.....
K

Nice idea, but unfortunately water (even at 3100 psi) is much less abrasive than any blasting media. But now that you have the snare shell stripped you should find a plating shop and have them chemically strip the remaining chrome off the shell. Then you could polish or bead blast the shell. Or paint it or have it powder coated. Just another idea.

Use a grinder like they did the avh snare drums.

No plating shops nearby plus from what I've seen it's not cost-effective. Of course had I known I'd bust the hose and be out a hundred bucks, that would be a big step toward getting it stripped......
L

JazzDrumGuy said:
No plating shops nearby plus from what I've seen it's not cost-effective. Of course had I known I'd bust the hose and be out a hundred bucks, that would be a big step toward getting it stripped......
Click to expand...

I have seen people on YT nickel plating items. You could try the same thing, you would just need a container to hold enough liquid to cover the shell. I am thinking about doing it with the hardware from my old Ludwig Marching snare. I am also going to plate a few Regens Lighters that I rebuilt over the years. If it works well, I may even try gold plating a few (small) things. I saw one where a guy copper plated some antique tools and it came out really nice.

You could probably get it blasted for $30-40. Then you could decide if you want to plate it, paint it or leave it raw.

I've done this on an acro and a brass timbale...get a wire wheel and strip it...it gives an industrialish look if you're close...then...run some shellac over it to protect it from moisture.
I love the look.

FWIW...my first 6.5 metal snare was a snare like yours though I had a local drum shop try and make snares to work with the super mechanisms....it didn't work well so I superfied it.

I just sanded mine with a palm sander and gave it a coat of wax. 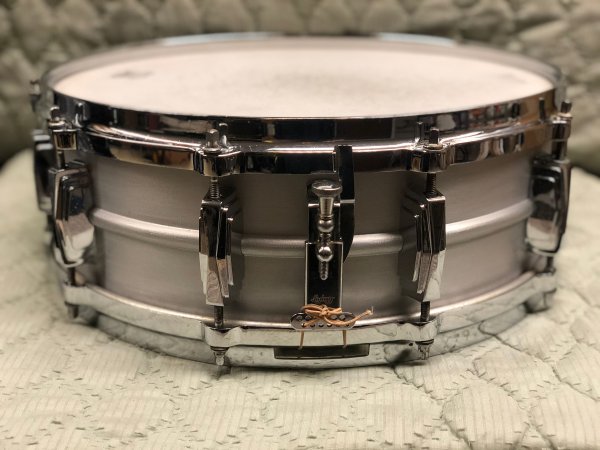 DrumR69 said:
I just sanded mine with a palm sander and gave it a coat of wax.

That looks amazing! What was the grit used?

You could probably use 60 for initial chrome flake removal.
I used 80 , 120 , 220 in that order.
The hardest part was around the badge.
I hand sanded around that with the 220.
If you want a smoother finish I would guess you could go even finer.
I kind of liked the look of the light lines it left.
You basically can make it your own per your taste.
If you used a Orbital sander it might give you a swirl finish.

DrumR69 said:
I just sanded mine with a palm sander and gave it a coat of wax. 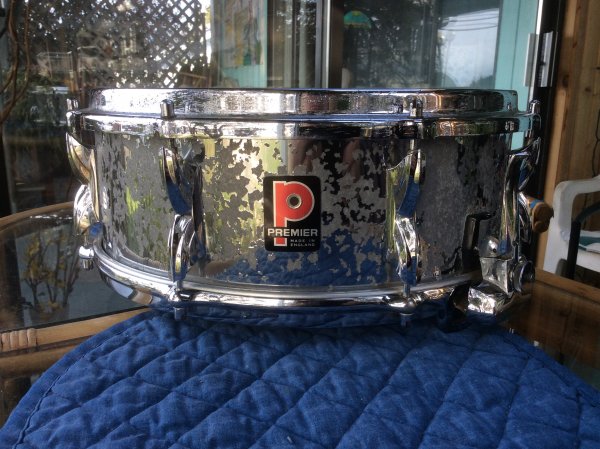