For my 3,000 post on DFO... I will share the pics of the Charlie Watts base drum I refinished!

So I always look at thousand post marks on DFO as milestones and I try to post something interesting to celebrate. I found this thread maybe 6 months ago and almost bumped it to the top as it talks about me refinishing a drum for Charlie Watts and a couple of people posted asked if I was still around. I decided it would be more fun to hold on and share these pics for my 3,000th post!

Update on Charlie Watts and his Gretsch's

I got a chance to go and hang with Charlie Watts and the Stones on Tuesday night. Got to soundcheck early and found a very sober Keith Richards standing around, so I got a nice conversation in with him. Charlie was incredibly kind and welcoming, and got a chance to take some really good pictures...

DFO member KINGTRIXON posted this thread back in 2013 relating how he was commissioned to find a replacement base drum for Charlie's black Gretsch kick that was being used as the back up kick in case a head or pedal let go in a show. He had a drum in stock but it was not in a natural finish, so he sent it to me to strip and refinish for the project. This was a LONG time ago in 1989 (man was I young!) and I can see in the blurry photos that I did not spend the time I should have matching the maple wood shell plugs where I filled the extra holes. I would do that differently today but it would all mellow with time so by now it probable looks good.

The following excerpt was on a site that was apparently quoted from a story on the KING MUSIC web site (apparently now gone), but it told more of the story...

In July of 1989, I received a phone call from a chap by the name of Chuch Magee. He told me that he was the drum technician for Charlie Watts of the Rolling Stones. I looked at the phone in utter disbelief ! I asked him to repeat himself . He said that he was looking for a vintage Gretsch bass drum . He had called several drum shops around the country, and a shop in St. Louis had mentioned my name and give him the phone number of my shop.

He was specifically looking for a Gretsch round badge 1960's drum in the 14 x 22 " size. It needed to be finished in a natural clear maple color. Gretsch did make natural finish drum sets, but these are exceedingly rare! I told him that I had a Gretsch bass drum from that era in that size. But it would need to be stripped of it's plastic finish, and painted to match Charlie's drums. I sent the shell down to Ward Wilson, a drum refinisher who used to work at the Atlanta Pro Drum shop in Atlanta, Georgia. He sent the drum back to me a month later, and I took the drum up to Philadelphia . The Stones had rented out the crumbling J.F.K. football stadium to do full scale dress rehearsal . I was allowed to pass through the security gate, and was brought up on the big stage to meet Charlie and crew.

When I met Charlie in 1989, the 14X22" bass drum from his beloved Gretsch Black Nitron kit, was being kept on a drum case behind his main drumset, as a backup. The refinished 14X22" bass drum that I brought to Philadelphia was intended to replace the Black Nitron bass drum. It is still there today. If you were to go behind Charlie's drumset today, you would find my drum perched on a drum case ready for action. Surprisingly, this drum has been used in many Stone's videos. In the video for the song "Rock And A Hard Place" , Charlie can be seen playing this bass drum and a snare drum. In the live video for the "Voodoo Lounge" tour, there is a "unplugged" set, Charlie is playing this bass drum and a snare drum in that set.

I found several on line articles related to this drum with photos but they are all so old none of the photos are still available to view. I have never seen a pic of KINGTRIXON with Charlie when he delivered the drum, or even the assembled drum but I would LOVE to see them should he read this and share them again.

I started my "drum business" (Dove Percussion) in 1983 by building stainless steel bar chimes in a tool room behind my house and that was followed by my wife and I opening our first actual store in 1985 still under the name Dove Percussion where we specialized in custom drums and restorations (old Slingerland Radio Kings were hot at that time). I sold that shop and business to Atlanta Pro Percussion in 1988 which at that time was THE southern drum superstore. I spent about two and a half years running their custom shop and building drums under the APP name when in 1990 I returned back to Chattanooga where I bought a house split into two sections and ran the store and shop out of one side (Wilson Customs) and we lived in the other upper floors. I closed the shop in 1997 and went to work for one of my wood vendors (whom I still work for) so I could have less stress (that part did not work out) and concentrate more on just playing. I have continued to dabble in both restorations and the occasional custom build though I have not built my own shells in years.

Since we have so many Charlie Watts fans here, I thought I would share these pics as my 3,000th post. I mentioned I never saw the kick completed and that is my own fault. When the Steel Wheels tour came through Atlanta, Charlie's drum tech called me up and offered two backstage passes to the show and to meet Charlie as a thanks for the work (Kingtrixon had apparently told them who did the refinishing). I was playing that night so I gave the tickets to my only employee and his wife. They STILL talk about the experience. What an idiot I was... but maybe someone will have pics of the assembled drum.

Thanks for the long read and for creating the community that is DFO. I enjoy this site daily because of you all! 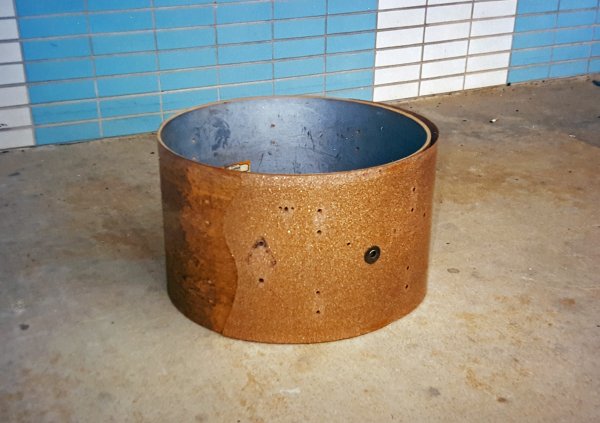 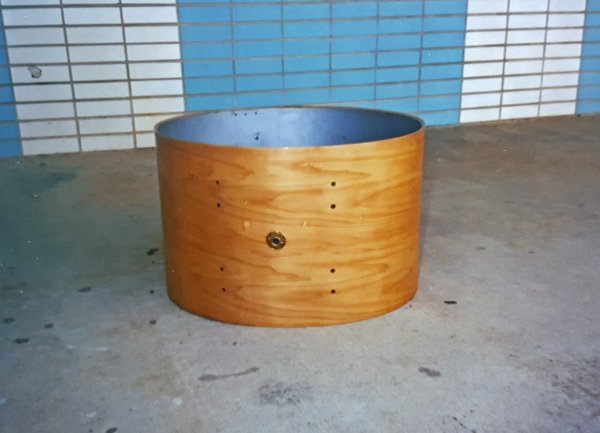 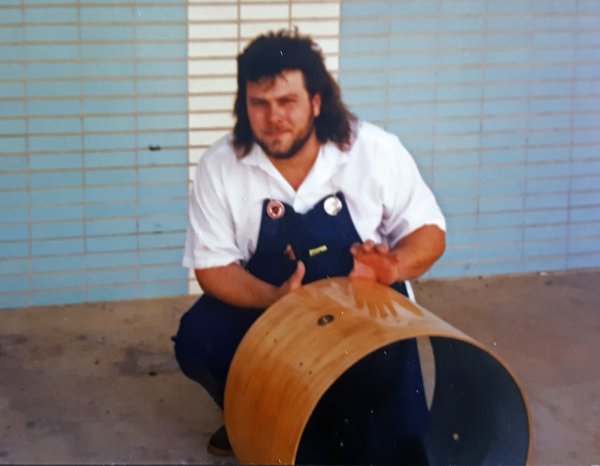 Wonderful story! (I do wish KINGTRIXON's pics were still available.)

Excellent!
That is so very cool.

Great story, man! You've motivated me to change gears for my next project and finish my Charlie tribute kit which is long overdue!

I really enjoyed the post - keep up the great info .

Yes, one of the coolest posts I've read here....awesome that you got to experience that. I'm sure you'll never forget!

If you only had a nickel for every post...

Winning...plus a new cymbal...of sorts!
You must log in or register to reply here.