Fresh from Duluth-Now with Video!

I can clearly see the snare beds and they are classic Duluth. You are good.

Nacci said:
I can clearly see the snare beds and they are classic Duluth. You are good.
Click to expand...

I wasn't too worried as John seems to know what's what on snare drum shell construction but thanks for the verification.

It would be here today of not for Thanksgiving...curse you national holiday.

Nacci said:
I can clearly see the snare beds and they are classic Duluth. You are good.
Click to expand...

Good.
It must have been the screen I was using to see it.

Good God is this thing heavy! 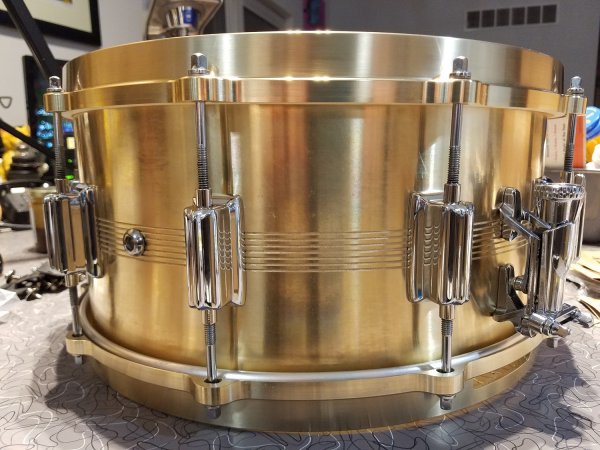 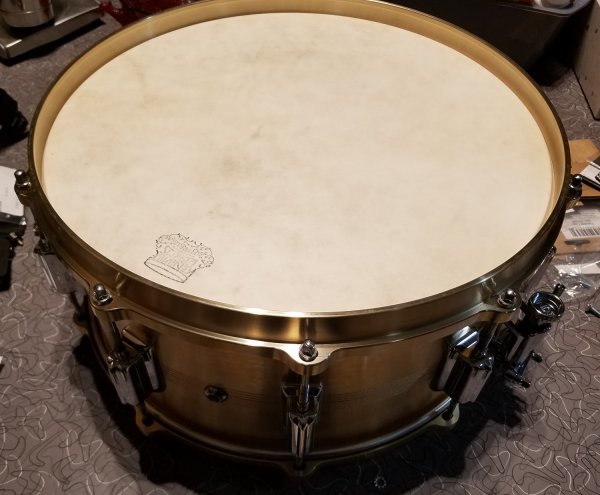 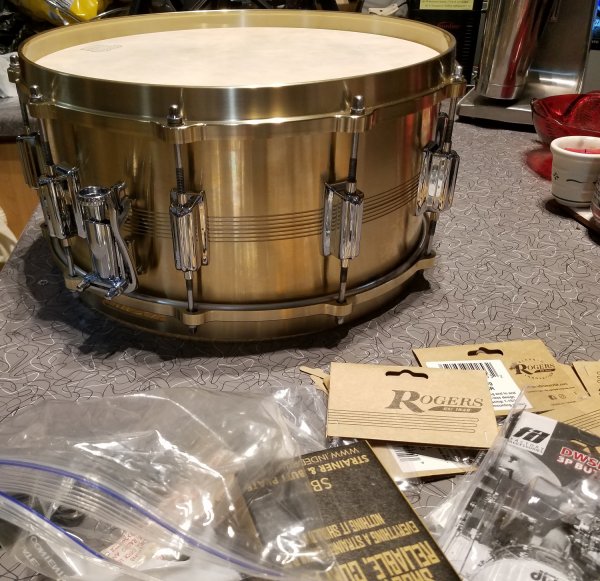 Video of unpacking and building it to follow if it turns out. Haven't got the snares on yet but my wife is already in bed. Plus I need to find a stand that can support this behemoth.

The collar on the Remo snare side head is much deeper than that of the Kentville kangaroo hide batter making things look a bit uneven but the lugs are centered on the shell.

Kudo's to John at Duluth. I already want to get another one in a different size.
Last edited: Nov 30, 2019

The ribbed shell is a nice touch!
New Rogers lugs?

yes, at ten bucks a pop.

Not a huge fan of tube lugs. My first inclination was Ludwig Imperials but then I hit upon the newly re-issued Rogers lugs. They are a classic design and it seemed like the very first Tama Bell Brass drums used a lug that looked similar to the Rogers (copied?).

Once I decided on using the Rogers lugs I thought about the early 7 line Dynas and that led to the final design.
Last edited: Nov 30, 2019

My wife just asked if she could move it off the counter for a minute...but she couldn't pick it up. It's supposed to be bronze but I'm thinking it may be spent uranium.

That is a real beauty. Nice job thinking outside the box. Did you show this to the fellas at the Rogers forums?
J

Put the snares on and gave it a whack with just random tuning and....WOW! 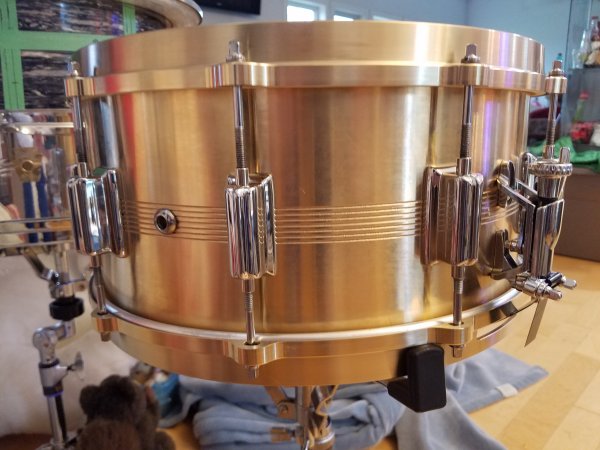 Re: weight, I have the Gretsch BB which is a monster too weight-wise and without a doubt a two-hander at all times. I picked it up with one hand when I first got it and no joke, injured my forearm.

Nacci said:
That is a real beauty. Nice job thinking outside the box. Did you show this to the fellas at the Rogers forums?
Click to expand...

Actually I don't have any presence on any Rogers forums, not that I couldn't, I have three Rogers sets.

Once I decided on the Rogers lugs I seriously considered going with a clockface throw and Rogers butt. I decided against those primarily because the Rogers name is prominent on the throw and I wasn't trying to build a Rogers drum, despite swiping a couple of visual cues from them. As I think I mentioned above my first inclination was flat back imperials but again they are so identified with Ludwig and I wasn't out to build a "Ludwig" either. I considered Gretsch lugs as well, either center mount doubles or two rows of singles but decided against that for the same reason. While the Rogers are certainly identifiable as such they are a little more generic looking without being too generic.

If someone reintroduced the Rocket lug I could see doing another drum with those.

Another thought is to have another shell made with 3 lines, have it chromed and install the correct slingerland hardware to make it a stealth super-duper Krupa. I am pondering the possibilities if one had one of these shells chromed or plated in Black nickel....hmmmm.

Looks great! Fair warning, I started with one build earlier this year, 14x6.5, now have a 13x6.5 and 14x8 Duluth’s as well. And probably a 3mm version in the works for early next year!

Ptrick said:
Looks great! Fair warning, I started with one build earlier this year, 14x6.5, now have a 13x6.5 and 14x8 Duluth’s as well. And probably a 3mm version in the works for early next year!
Click to expand...

Yes, I think I'm already addicted. I keep thinking of variations I could build. I only have three more payments on my 987 and then I'll have extra money each month too. Could be trouble..Although, I seriously wonder if I could handle moving an 8x14 version about.
R 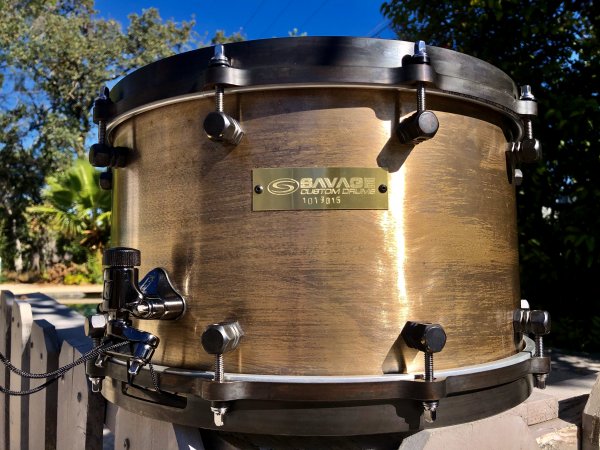