I just bought a 10 lugs Acro to be my "effects" snare. I'm having fun trying all sorts of extremes like over-muffling, ultra low and/or high tunings. My goal is to use this one for Ash Soan/Aaron Sterling type of super processed tones. I have other snares that sound better for open and lively stuff, but this one dries up like Death Valley and still retains plenty of attitude.

Today I tried a trick I've seen on the Sounds like a drum YT channel: making a ring with gaff tape around the inner perimeter of the batter head (Remo coated CS) right where it sits on the bearing edge. It does a good bit of muffling but keeps the surface of the head clean. I know some heads have an inner ring built-in but this is a neat trick when you don't have one handy.

I also replaced the 16 strands wires with a set of Puresound Super 30's I had lying around, switched the plastic straps for strings and Bam! I instantly got that "compressed 808 snare" sound without any processing whatsoever. And this without losing a lot of volume/feeling sluggish like with a BFSD sheet. This an excellent starting point and it is gonna be a fun tone to mess around with effects and stuff. 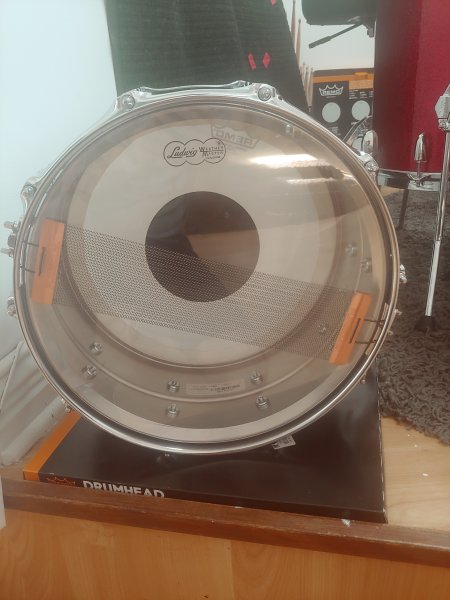 If you really want to make it sound like a gated compressed 80’s snare try a evans hydraulic next head change.

1988fxlr said:
If you really want to make it sound like a gated compressed 80’s snare try a evans hydraulic next head change.
Click to expand...

It's on the list for my next shopping trip!

Try almost completely detuning a lug or two (neighbor lugs) to get an electronic sound.

Tornado said:
Try almost completely detuning a lug or two (neighbor lugs) to get an electronic sound.
Click to expand...

I've tried that trick on each one of my snares and always get some annoying low end "whomp", some kind of weird undertone instead of "completely dead". Plus the head looses a lot of its rebound and feel. I've seen Carter Mclean do it in an instructional vid and man! did he nail the sound. You'd think this one would be hard to mess up, but I somehow managed

The Big Fat Snare Drum full sheet and the donut one failed to produce a satisfying tone/feel combo as well.

Anyway, I had fun today with my little Gaffer's tape arts&crafts project on my batter head, was pleased with the sound and I just posted here in case this may be something that someone might be interested in trying. I needed something dead and neutral as a base to add some effects to. I think I've achieved it. the tone without effect is already pleasing so I can't wait to start drenching it in saturation, compression, delays, verbs and all sorts of un-holly stuff that would make purists cringe.

There are many ways to skin a cat, many of wich I have tried or maybe will try in the future. Even if I don't really hate cats ...
You must log in or register to reply here.

The 3 Main Bass Drum Head Combos - What are the differences?