Also, I had a Mapex steel drum with tube lugs, and the rims were too large for the shell (or the shell was too small for the rims??). All 8 t-rods would not go smoothly into the lugs without some of them binding up. Splay on tube lug drums can definitely cause problems.
Click to expand...

Fair enough...in that case I would file it under bad enough to send back. I've also not messed around with tube lugs much. All of my Ludwigs have had imperial lugs, and gave me no splay issues at all, even after gasket removal.

Slingerland COB Sound King from the '60's and 70's. I have four of them, and prefer them to all my other snare drums. I even bought one with most of the parts missing, and the shell twisted and dented and turned it into a great sounding drum using after-market parts. If the throw off is missing or broken, you can get a Trick throw-off with Slingerland adapter on eBay.

sternerp said:
Slingerland COB Sound King from the '60's and 70's. I have four of them, and prefer them to all my other snare drums. I even bought one with most of the parts missing, and the shell twisted and dented and turned it into a great sounding drum using after-market parts. If the throw off is missing or broken, you can get a Trick throw-off with Slingerland adapter on eBay.
Click to expand...

I have been looking for one of those...

Hello DF,
Most often picked when I'm in a studio, next to my '66 5x14" Ludwig Supraphonic, is this (brass) Manu Katché. I feel fortunate to own an early model and I think it's in the top 10 snares, ever; a real winner. It's always impossible to describe sound, but I'd say this MK has a full, balanced, "satisfying" sound, which it delivers at any tuning, with any head. It also has more power than a lot of snares, with a nice mid-range "throatiness". Like I said, whatever does that mean? Who knows, but I, and a lot of engineers, like this drum. Looks great, too.
Thx 2 all. Play on... 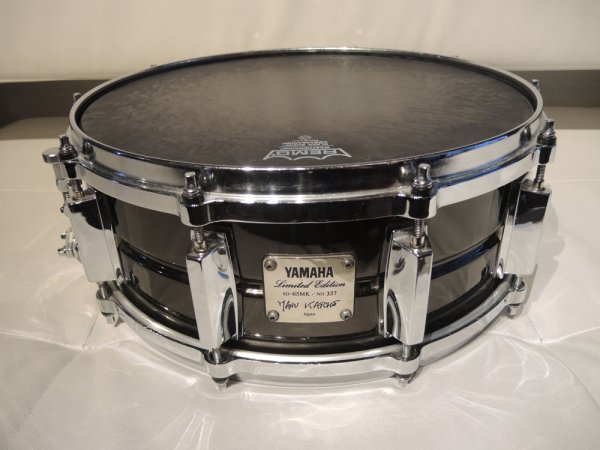 Jesse Segovia said:
Ditto on the Pearl Steve Ferrone Signature. Best sounding snare I ever owned, very Bonham-esque to my ears. I regret selling it.

I sold mine too. Shouldn’t have.
R

madhermit said:
I have a Dunnett 2N in Antique brass. Killer snare! 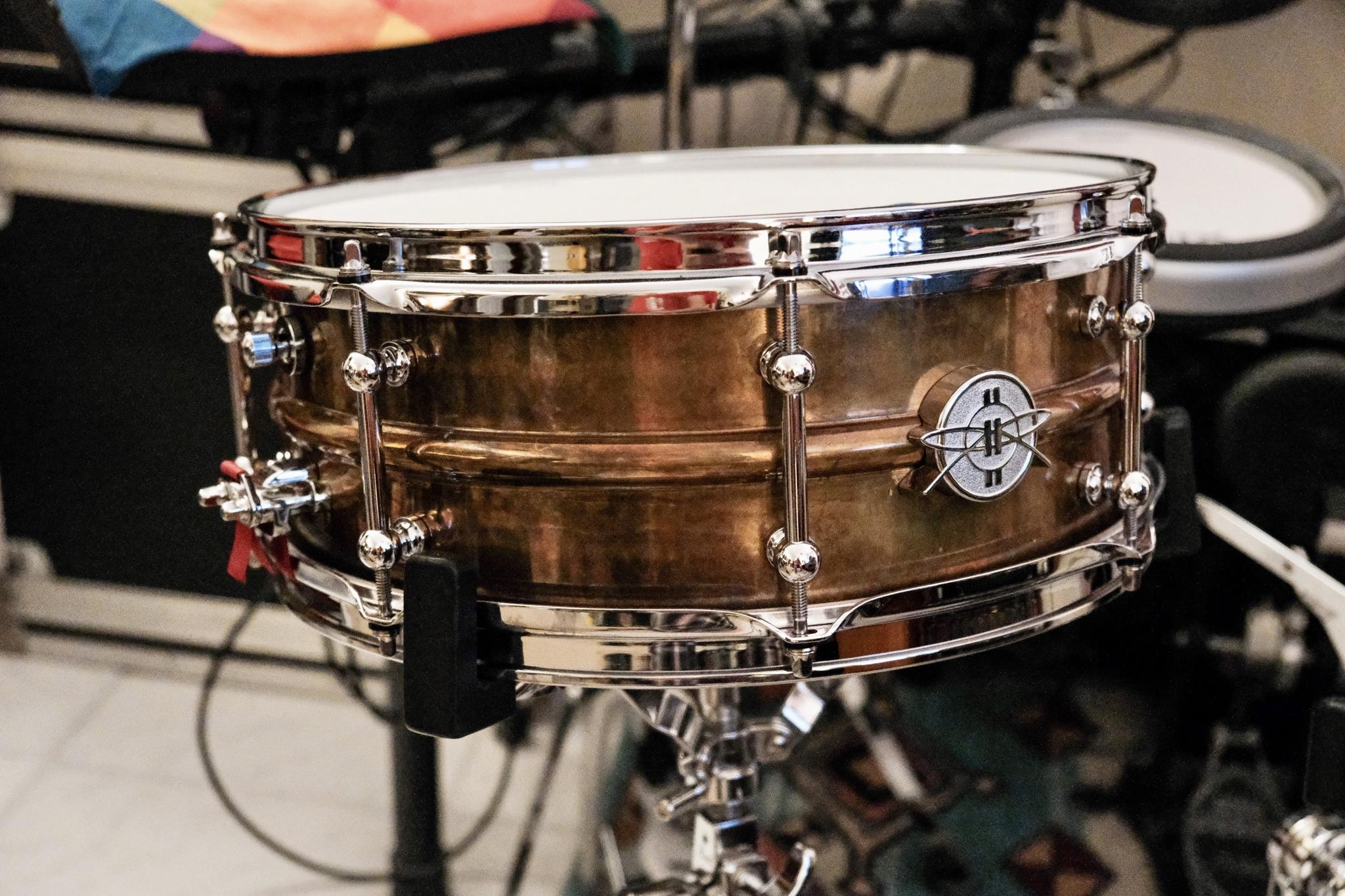 Wow! Beautiful snare. For the last several months I've been looking at different Brass snares and have narrowed my search to 3 different brass snares and the Dunnett Antique Brass is one of them. You love the sound of this one, that makes me feel better that I'm looking in the right direction. I posted a question a little below yours and would appreciate your thoughts.
Thank you,
Ronnie G
Click to expand...

tbird8450 said:
I took the gaskets off both my 402 and BB and see zero noticeable splay on either. Doing so definitely opened up the shells. Splay is just cosmetic anyway. It's not going to affect the sound unless it's so bad you can't give the snare a proper tune - in which case, send it back.
Click to expand...

Splay is unacceptable in my opinion

The OP didn't state a budget I don't think except to say $800 retail for a new Black Beauty was too much, but with some patience a used one can be had for $500 or less. The BB on ebay someone posted on the previous page for example.

I put off getting a BB for a long time because of price but have had mine now for 7-8 years and it's been my snare of choice more often than not. I say just get the real deal if you can.

One drum that I've been expecting to get a mention on this thread is the Ahead 6 x 14. I've heard good things about these snares, including on the Forum, but I've never gotten the chance to play one myself. Any more informed opinions?

i have a pre collector's DW brass snare that I love to death and have had for over 20 years - it looks like it came from the titanic from rust/tarnish (i took it on an awful lot of tours), but sounds amazing. people seem to hate them online, but it still gets picked fairly often in my studio over some heavy hitters.
S

Ludwig Raw Brass is going to mainly have a shell to shell difference in tone compared to a BB.
You'd be able to tune it up next to a BB and have it sound basically "the same".

Dunnett uses pretty stout tube lugs on his, so that will make a difference if you were comparing, but I bet is sounds amazing, so at that point who cares?

DW's is a straight shell, which will have the main Brass character, but a different overall sound, AND different hardware, throw, butt, etc... weight compared to the Ludwig.

Last year, I put together a "straight shelled BB", using flat Imperials and other Ludwig hardware--I put a Monroe badge on it because it matches my other stuff AND I'm never selling it (I don't feel bad one bit about the sacrilege....).

I'll say that since it has everything ON IT (hoops, lugs, etc...) so that could be A/B'd compared to a REAL BB (I have 3), it can really hold its own.
Soundwise, it's a little different because it has a straight shell, a little more contained with the seam, a little less "air", a different ring, but man, is it a great sounding drum. I dig it as much as a BB TBH. It's AS great as my BB snares that I set up, and tune, and play.

It's the straight Black Brass shell they have on DFD.

Location
In Front of My Computer

How could I forget? The Ahead 6x 14 Chrome Over Brass (ASC614) is another killer option.

I owned one a couple of years ago and sold it in a fit of stupidity. I will own one again.
A

My main workhorse snare is a Pearl brass Sensitone, and has been for over twenty years. I love it. I find it very versatile. The only modification I have done - I replaced the top head rim (triple flanged) with a Pearl cast hoop. To me, that has "firmed" up the sound, but it is purely subjective and my own personal taste.
S

Beesting said:
I was at a Music Go Round store yesterday looking at snares and they had a Pearl Sensitone brass (well used, $300). The top head was totally loose so I borrowed a tuning key and as the head reached tightness, I was surprised how good it sounded. I was tempted momentarily but decided to do some research and more looking. A couple years ago our local Guitar Center had a 6.5" Black Beauty which I played a little and instantly recognized why it's so highly regarded. But $800 is out of my reach. So my question for those who have brass snares other than the BB, what can you recommend?
Click to expand...

Sensitone are sooooo underrated...i own 2 of the new style sensitone...one aluminum & one brass.. Both 14×6.5 size...they are phenomenal snares...they are super sensitive as their name suggests..or can also crack & have clean volume too..i swap between my starphonic aluminum 6×14 tama & my sensitones..i really like the tube lug design on the restyled newer sensitones..they hold their tunning perfectly..throwoffs upgraded too..solid drums..i bought mine brand new for between 3-4 hundred .would have to look to recall exact cost.but they sound as good as majority of drums priced twice that amount..alll day..i cosign their abuility & quality 1sthand owner last few yrs tested & tried.solid

aindiparse said:
My main workhorse snare is a Pearl brass Sensitone, and has been for over twenty years. I love it. I find it very versatile. The only modification I have done - I replaced the top head rim (triple flanged) with a Pearl cast hoop. To me, that has "firmed" up the sound, but it is purely subjective and my own personal taste.
Click to expand...

Ronnie G said:
Hey guys. Love this thread and great timing for me personally, Thank You upfront. For several weeks I've been seriously looking at the Ludwig Raw Brass Snare 6-1/2x14, a snare I've had an eye on since they came out. But I'm also very interested in the Dunnett Antique Brass Snare but at a higher price point and I'm also looking at the DW Black Nickle over Brass Snare. I would love some thoughts and feedback on these 3 snares, I'm seeing some info on the DW snare here. Any input would be greatly appreciated.
Thank you,
Ronnie
Click to expand...

I had a DW Black Nickel over Brass snare that I really, really liked before my Dunnett. The Dunnett is just bigger and richer sounding, and VERY sensitive. Worth the upgrade $ to me. Never played the Ludwig, so won’t comment on it.

P.S. The Dunnett took a number of months longer to ship than originally quoted. Dunnett has a bit of a reputation about that, so I pretty much expected it. Worth the wait.

the Canopus Brass and Hammered Brass snares are both killer. I play a Hammered Bronze and I adore it
S

Vinman said:
No one here has mentioned Mapex snares!!!! I recently purchased a Mapex Matt Halpern sig snare, The Wraith. Its from their Black panther line and it is sooooo sweet sounding!!!! I found it on GC for $350, it was regularly $500 but because since Halpern is no longer with Mapex, he went to Pearl, they(Mapex & GC) was clearing them out. Its a 14x6. His new Pearl brass snare is listed at $700!!!!! Its a great drum also.....
Click to expand...

I did! Love Mapex snares!

Do they make brass snare drums that don’t sound good? I’ve never run across one that didn’t have some potential. I’ve tried the cheaper Ludwig Black Magic snares, Worldmax brass snares, Pearl Sensitone brass snares, Pork Pie’s brass snares, and Mapex Black Panther brass snares with no issues at all. Honestly, they all sounded great and looked good too. I’m sure there are “bad” brass snares out there, but I’ve yet to play one. It seems there’s a brass shell out there for every occasion!

A Question About Something Kenny Aronoff Recently Said…