The first vintage kit I fell in love with was a 1970's 20/12/14/16 SSB walnut kit. I tried and tried to buy that kit but the woman that owned them wouldn't sell. It was another 6 years before I finally landed my first vintage kit. A 1970's Gretsch 26/13/14/15/18 SSB walnut kit. I played that kit for a couple of years but struggled with the bass drum. It had this funny mid range boing to it that drove me nuts. I ended up trading it for a 22/14/16 Camco kit. That led me into a huge rabbit hole of everything Camco and eventually George Way (pre-Camco).

Last year we had a fire at our house that wiped out almost all of my George Way drums and some of my Camco drums. We are still in the process of rebuilding our home. I initially was not going to buy any drums until we moved back into our house but naturally a few kits popped up for sale that I couldn't pass up on. The first kit was a 1958 George Way kit in BDP 22/12/16 w/ two 5.5x14 snare drums. It replaces the 1959 George Way 22/12/16 BDP kit I lost in the fire.

As fate would have it my old 22/10/13/16 early 1990's SB Tony Williams Yellow kit popped up on Maxwell's in New York. I sold that kit over 10 years ago in California. I always regretted selling that kit so I bought it back and it made the trek from New York back to California! At the same time a matching SSB TWY 6.5x14 16 lug snare popped up on Reverb so I snatched that up as well as I never had matching snare.

One of my kits thought to be lost in the fire is a 1973 SSB 22/13/16/6.5x14 18 lug snare all in walnut. My drum repair guy told me it was just the clear coat that was damaged. He cleaned them up and put a new clear coat on them. I due to get those back in a couple of weeks. However all the hardware on the drums are toast. So it will be awhile before I put that kit back together.

Before the fire I owned 4 Camco kits, 4 George Way kits and 4 Gretsch kits.

After the fire I own 3 Camco kits, 2 George Way kits and 7 Gretsch kits.

I'm glad to see you getting back on your feet again. It's sad to lose drums but fortunately nobody was hurt. I have actually been on a bit of a Gretsch thing myself. I have always played Ludwig except for my first set which is a 1974-75 Gretsch set in Rosewood red. I also recently picked up a round badge 8x12,14x14,5x14 in champagne sparkle and am currently hunting the bass drum. I started gigging again so I decided to bring back my Gretsch set for some of my gigs. I have owned this set since I was 12 as they were purchased used in June of 1983. I had forgotten how nice they sound! I was also skeptical of the chrome SSB Gretsch snare I picked up in the 90's as this set came to me with a 1966 Supra that I still own. The lightning throw seemed flimsy and the regular snares on this drum made it sound kind of harsh to me. I ordered some 40 strand Gretsch snares for this and played around with the throw and now it sounds really good. The throw still seems like it could come loose but it stays in place and after a full gig, I had no worries. I would love to find the matching rosewwod 5x14 of the same vintage for this but it's definitely not a priority. I would love to see some pics of your sets and snares. They sound like they are really nice. 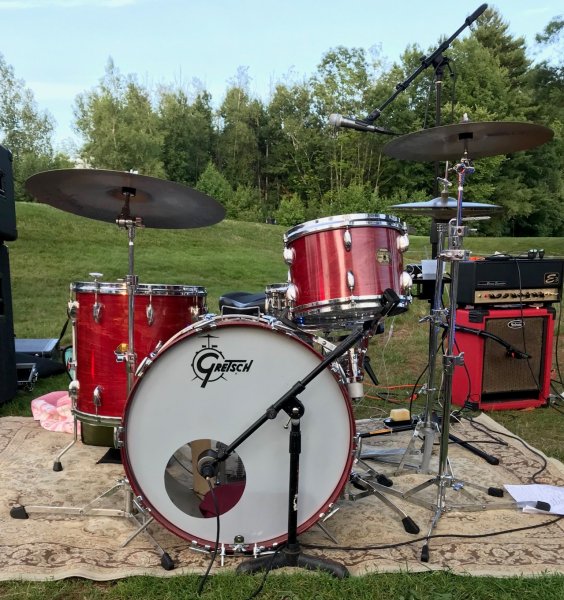 Beautiful kit! I'm a sucker for red rosewood! Very cool that was your first kit and you held onto it!

Here are most of my Gretsch kits. The green kit is a 40's Gretsch kit that I wish I had held onto! 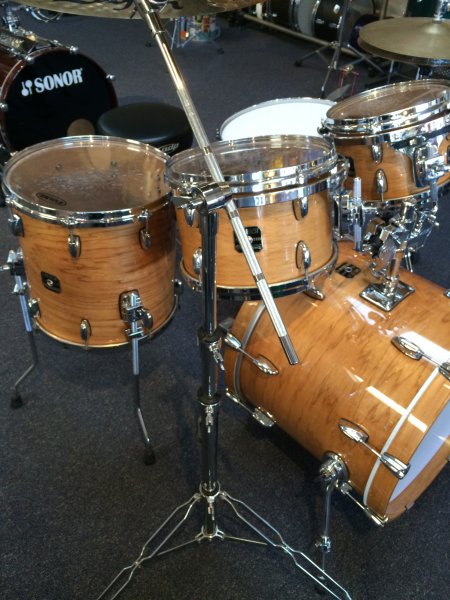 Yes it's a Renown Purewood. 20/10/12/14/5x14 in 6ply Hickory. It's an amazing sounding kit. The snare got pretty toasty in the fire. All hardware was fried but I was able to save the shell. I wiped all the burns off with a magic eraser and amazingly the clear coat wasn't even damaged! I did however lose the Renown Purewood badge. I currently have a USA SB to really confuse people! Hopefully I'll find a badge for it one of these days. Also the 10" tom had to be refinished but the hardware was fine. Go figure!

Glad to hear you're getting back on the horse.

I have to confess, I've never liked Natural Wood Finishes. For me, Wrap is where its at.

D. B. Cooper said:
Glad to hear you're getting back on the horse.

I have some pics up there. What pics are you looking for?

retrosonic said:
I have to confess, I've never liked Natural Wood Finishes. For me, Wrap is where its at.
Click to expand... 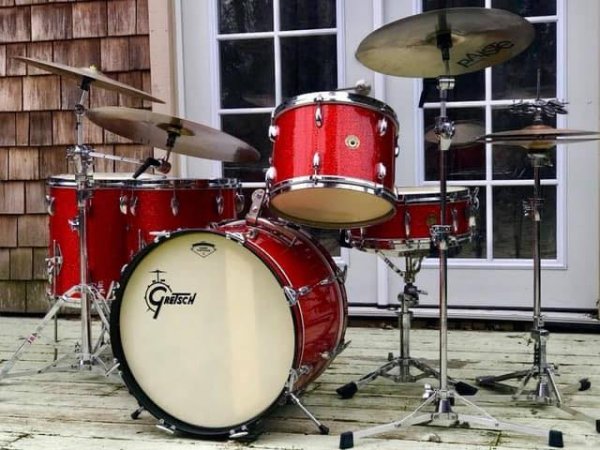 Dol: Your set is BEAUTIFUL.

Wow. You guys have cool stuff.

DolFan54 said:
I have some pics up there. What pics are you looking for?
Click to expand...

Haha. I know you posted some. But you said you had 12 kits and I wanted to see all the Camcos and such.

DolFan54 said:
Beautiful kit! I'm a sucker for red rosewood! Very cool that was your first kit and you held onto it!

Here are most of my Gretsch kits. The green kit is a 40's Gretsch kit that I wish I had held onto!
Click to expand...

Wow beautiful stuff! Thanks for sharing. I actually wrote an article in NSMD on my first set. I have had a love hate relationship with it for years. I wasn't happy with it when I was younger because the hardware wasn't great. I was also not crazy about a wood finish as I liked loud colored wrapped drums. Fortunately I never messed with any of this and I actually really like this set and the way it looks. They sounded fantastic on my last gig. Everyone had a first set of drums... What was yours? — Not So Modern Drummer

in the summer of 1982 my world changed when a group of kids that were 3-5 years older than me had a band and they played on the back of a trailer at the park. As I sat watching these guys play things I had never heard before like AC/DC, Aerosmith and Van Halen I was totally sucked in to each band me

retrosonic said:
I have to confess, I've never liked Natural Wood Finishes. For me, Wrap is where its at.
Click to expand...

If you are gigging, I agree.

I've recently joined the Gretsch club after finishing out this Round Badge kit. I'm chasing the tuning a little bit right now on the snare and trying out some different head combinations on the toms, but these are beautiful drums and I'm having fun trying to get my old jazz chops back up to speed. 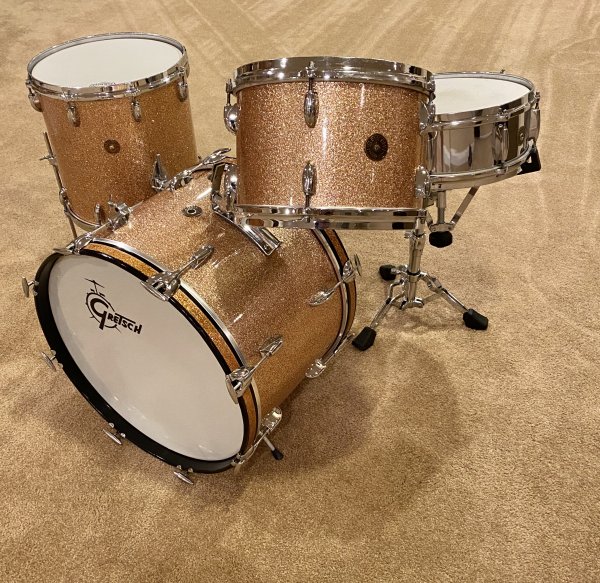 tension with your hands, tension where your hands feel comfortable and the sound will follow..with those ol' brass cob's.. aLmost aren't- instant gratification- drums..more long term. It's like ..30 years later.. you turn to the drum and say " You know You were right all along"... (!! 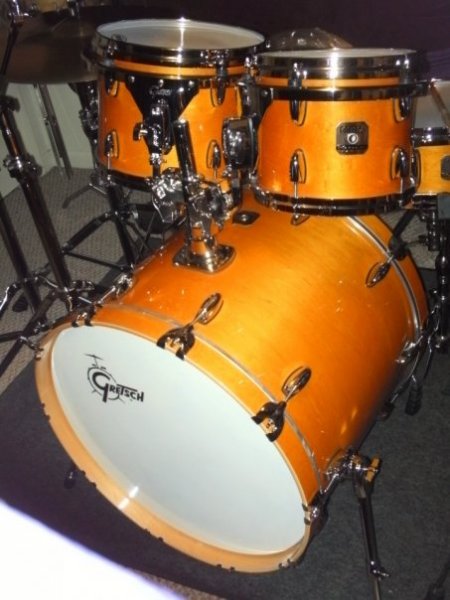 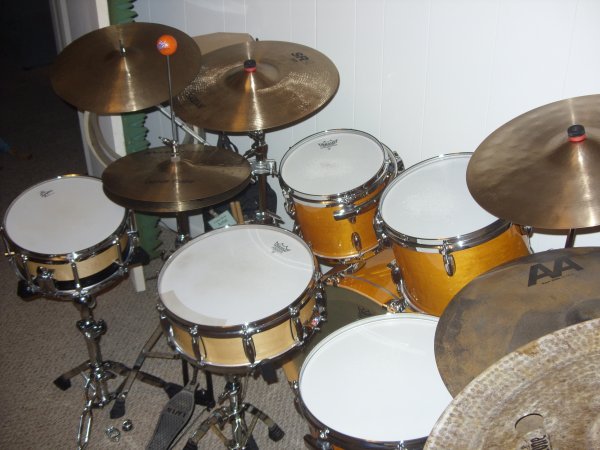 DW Performers series vs. Gretsch Renown for a student