If you look closely it appears to have had some rather crude air brushing along the top rim to the left of the cymbal stand and some at the bottom rim where it looks like it could be touching the stand. The Drums are 30's to early 40s Radio kings yet the tom has a diamond mount. Those came much later so there had been modifications over the years. There also appears to be some retouching of that mount. 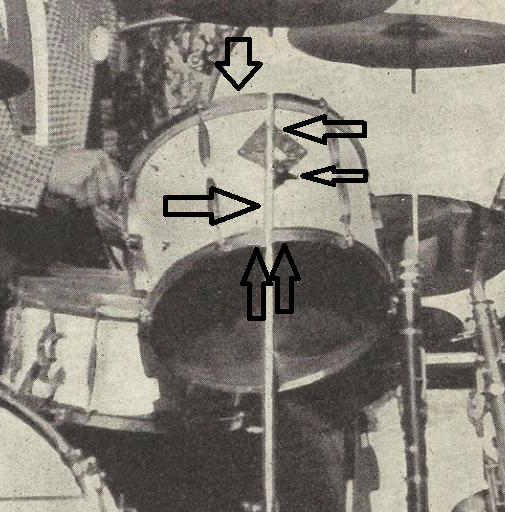 I suspect that there was some sort of improvised mounting system mounting the tom to the cymbal stand. For whatever reason someone airbrushed it out leaving us with a flying dutchman tom.
Last edited: Apr 13, 2020
T

Btw, to me it looks like the FT doesn't have legs but is sitting on some kind of tripod basket. Is this correct?

ThomasL said:
Btw, to me it looks like the FT doesn't have legs but is sitting on some kind of tripod basket. Is this correct?
Click to expand...

Yes that was normal for a kit of that vintage.
S

stopsign70 said:
hello friends,
what do you think?
where the tom is mounted on?

interesting, but not for that inclination
are thoose wood stands original?
You must log in or register to reply here.

H
One drum company for all of your drumming needs?
2 3