I know zero about Rogers except Dynasonics are said to be great.
Is this any kind of interesting deal? 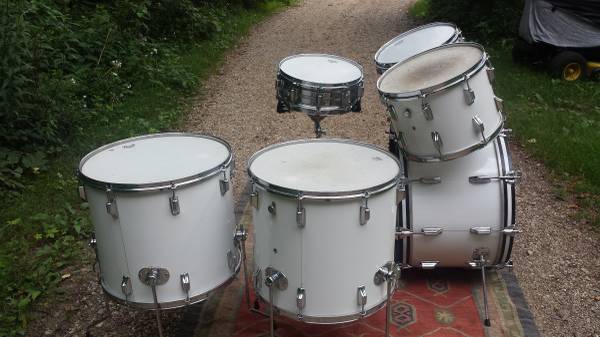 All I've been able to find out is that the New England White finish was offered from 1973 to 1976.
I believe that's from the Fullerton years ... and I'm not sure that's good....

He says he also has a '67 Buddy Rich kit, and (of all things) a Trixon kit. I'm defintely going to visit this guy ASAP!

Looks to be 72 73 Swivo hardwr 5 ply maple shells rings it’s all good. collet tightening nuts might be the cast not so good but everything is fine. Fullerton gets a bad wrap because of those collet tighteners everything else is just fine. Nice big drums, snare is brass $350 right there. I’d have no problem dropping a grand on those. Nice Londoner kit. Worth a look at the other gear as well

The Rogers in the picture is a Ramones kit!!
Always wanted a Tommy Ramone kit!!
/L

I’m planning on a visit to check out this kit, and the others he mentioned in the CL ad. Pics to follow.

vintagedrummersweden said:
The Rogers in the picture is a Ramones kit!!
Always wanted a Tommy Ramone kit!!
/L
Click to expand...

Mr. sweden - I’ll ship them to you if you buy them!

I went to see the kit. It’s what he says it is. The wrap is in good condition. The 24 bass looks huge, as do the two 18” floor toms. He said he’d sll for less if omly one floor tom.

The Dynasonic looks solid. Weighs a ton. No, he won’t sell it separately

There is also the WMP Buddy Rich Kit. I didn’t inspect it closely. It is complete with snare. I didn’t get a specific price but I believe it’s north of 2,000.

He has a couple of Ludwig snar: a Supra, and a Super Sensitive. He isn’t selling those right now. But I bet he would if someone (not m) waved cash at him.