Hi all
Great forum been lurking for a few weeks now....
I was having a garage clear out and found some old cymbals one of which was a Paiste 18"
There was a serial number on top
PAisTe 637046

And Paiste Made in West Germany in black underneath

I tried to do some investigating but the information I got seemed to indicate that the stylized PAisTe was introduced in the 80s/90s and that the first number indicates the year of production so in my case this was 1996.
However I also read that an 8 number serial was introduced in 1995 so it all doesn't stack up.
Any help would be greatly appreciated

My first guess would be an Alpha Series cymbal. A picture of the whole cymbal and any hammering on the top would help. And its nice to see you posting rather than lurking!

Paistes made in Germany don´t follow the usual serial number logic for Swiss made cymbals.
Nothing fancy, maybe be a 302.

Thanks for the replies.
A full picture would help wouldn't it

Weight is around 1350gms if that helps at all 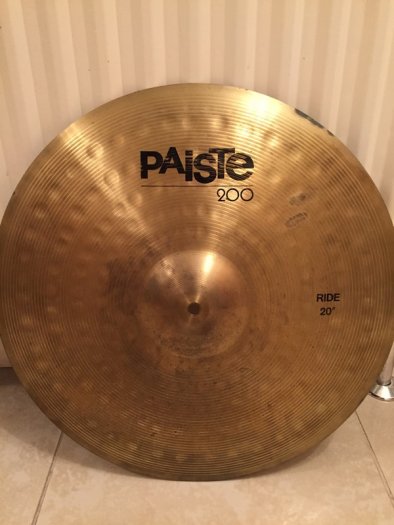 The Whale said:
My first guess would be an Alpha Series cymbal. A picture of the whole cymbal and any hammering on the top would help. And its nice to see you posting rather than lurking!
Click to expand...

Posted a full picture if it helps
L

Yeah does look similar. Is that your cymbal? Wondered what the stamp on it was like

mgdrummer said:
I don’t own any 200’s, that was a photo I found online.
Click to expand...

Ah OK. It certainly does look like a 200.... It was the serial and the stylized paiste that was throwing me off
You must log in or register to reply here.

A
What’s your favorite cymbal brand and why?
2