Hello all,
can anyone help identifying this shellset? I could get it for 180 bucks, but the seller has no idea, what brand it is. Who knows what that is?
Thanks!
jo 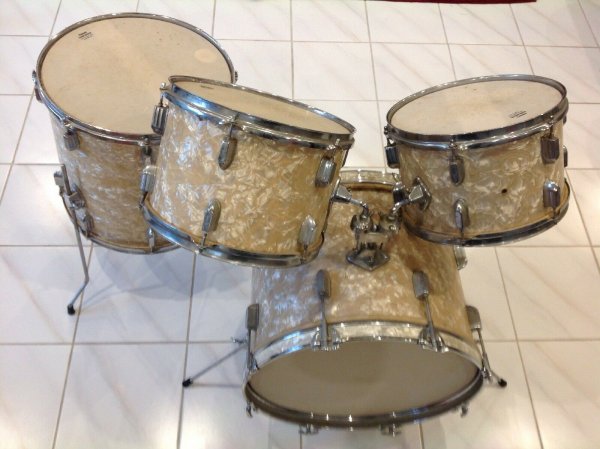 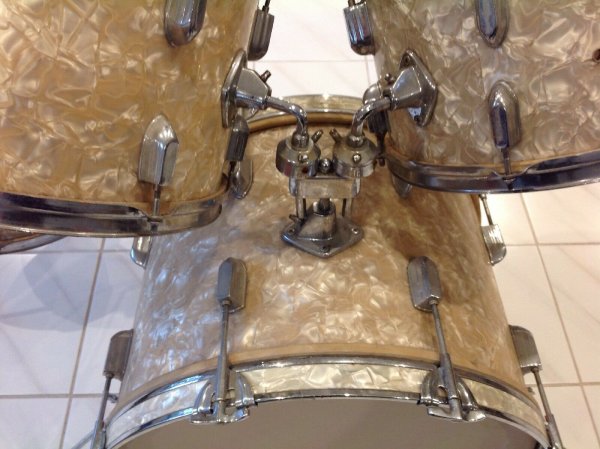 From looking at the tom mount,and the "motor boat" lugs I think Pearl,possibly a rewrap in vintage wmp.
A friend had Pearl kit with that tom mount and bass spurs and the shells were fiberglass.If you really laid into them they were quite loud as I remember.
Last edited: Dec 15, 2019

The mount says "Pearl". I'd be curious why the mount on the 12" appears to be upside-down compared to the 13", since one is closer to the batter, the other to the reso.

If nothing is broken, and you have need of kit you can leave at a practice space, or a young relative of yours is interested in drumming, I'd pay $180 for that.

Pearl was founded by Katsumi Yanagisawa -who began manufacturing music stands in Sumida, Tokyo- on April 2, 1946. In 1950, Yanagisawa shifted his focus to the manufacturing of drums and named his company "Pearl Industry, Ltd."

By 1953, the company's name had been changed to "Pearl Musical Instrument Company," and manufacturing had expanded to include drum kits, marching drums, timpani, Latin percussion instruments, cymbals, stands, and accessories.

I guess from a brief Google search "Silvertone" (but could be any of the "stencil" names above)
or Could be:

1 owner vintage Pearl President drum kit in Blue Oyster. Kit is in excellent shape, minus a common Pearl problem of the era described below. These drums were kept in a finished basement and seemingly never gigged. Original heads all around. Metal is free from pitting, drums are free from scuffs. ...

i think they're prior to Pearl putting their name badges and front logo on their drums.
Last edited: Dec 15, 2019

By the tom mounting hardware you are looking at 1969-73ish Pearl. Marine Pearl was offered as a wrap on those years.

All buffed up that rig could bring double

Coronets had the same lugs and tom mounts in the early 70's . Unless that's a phenolic - shelled kit, it's most likely luan or masonite . Yamaha and Star were about the only brands that weren't cookie cutter during that period.
S

Yes the WMP is cool and if you plan on keeping them it doesn’t matter but I would say $180 is on the top end,especially no snare.

I think $180 for that is quite reasonable if fully intact with uncracked shells. A nice plus with the WMP finish. Looks to be a reasonable "copy" of Rogers Swivo mounts, lugs, etc. An all there, no mods, and nice condition 5 piece MIJ kit in a nice finish is worth $250-$300 these days...imo. All the resalers in my area are asking $250-$450 for similar kits. Quality counts....even in MIJs. So many have had their tom mounts altered. And I like the kits where the mfg copies Slingerland, Rogers, and other name brands. These MIJ kits may continue to rise in value as most vintage USA brands fall back.
Last edited: Dec 16, 2019 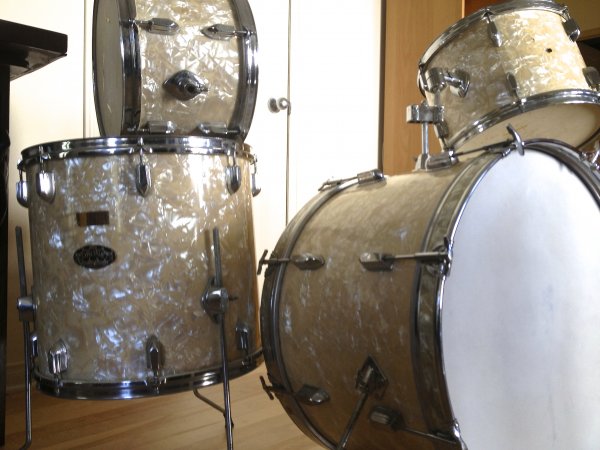 Japanese, here is mine Coronet Deluxe.

Since I'm working on a purge of things I don't use I took a pic of some of the Pearl Mounts I have from that general era and took a peek through the catalogs. The first mount is in the 69-73 catalogs. The second mount is in the 73 catalog and the third is the from '75 up until the much bad-mouthed tube mounts came in. I don't know if there was a 72 catalog. All I have is a pdf that is 71-72. My guess is those mounts in OP's pic came in in 72... just a guess. I know that Pearl, like others, used up parts until they were gone. Disclaimers: 1 I don't know nuthin. 2 When I write 'Pearl' I am referring generally to pearl and stencil kits made by pearl. 3 I've never owned a set of Pearl wooden drums. I only have American firewood. 4. I'm only posting to 'give back' general knowledge to the forum...
Also: those first two mounts suck.