How and why I got interested in being a musician. I'm sure that you each have your own stories...

I fell in love with music when I was old enough to operate my dads massive stereo equipment. I was maybe 4 and would listen to his records with headphones for hours on end. I would rather do that than watch TV in those days. My Dad had all kinds of music in the day other than Rock and Roll. When my older brother brought home Cosmos Factory by Creedence Clear Water Revival and Guess Who's American Woman Albums I was hopelessly hooked and would immediately focus on the drums and rhythm section. I asked for a drum set every year for Christmas to the point my parents finally quit asking what I wanted because the answer was always the same. They finally excepted my request to co sign a loan for a Ludwig Quadra Plus kit when I graduated from High school (79) so I could have my own kit rather than a borrowed kit from a friend that no longer was interested in playing drums. I played in bands 5 nights a week on night club circuits for 5 years or so I stopped for 15 years to finish school, marry and have a family but my loving wife pushed me to buy another kit and start playing again and I haven't stopped the love affair with drums since.

Being a drummer is what I was built to do. I'm lucky that I found this out when I was 9 years old, the first time my parents played Goodman's Carnegie Hall Concert version of "Sing, Sing, Sing" for me (with Gene Krupa on drums). As someone else said above, it was Game Over.

lay down the boogie and play that funky music till you... 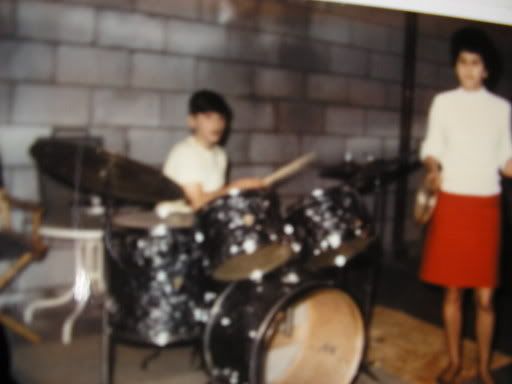 Hypercaffium said:
I was a 10/11 years old kid when a priest walked in my classroom asking who wanted to sing a song. I said yes and I don't even remember what they asked me to sing, honestly.
He was auditioning for the Pope's choir and I ended up being employed for years. Long story short, I've never paid for school, books, conservatory, travels around the world, everything you can need. As a kid, it was hard both phisically and mentally, but they paid well and gave the opportunity to learn music in depth. It was a beautiful time of my life. I ended up my experience with them when I went to high school and never looked back. They've been good to me, but musical tastes change and life goes on. Now I work in a private company and music is just a hobby. I'm a polistrumentalist who is just started on drums (december 31 2020).
Bye!
Click to expand...

I spent three years in Frosinone..my first wife was Italian..Two of my kids were born there..

That’s awesome. Even cooler playing that many genres. Keeps ya well rounded and working. What’s your favorite to play.
Click to expand...

My favorite is playing brushes in acoustic jazz trios.

studrum said:
Wait a minute - you sang in the Pope's choir? The guy in Italy who lives in his own city inside Rome? The leader of the Holy Roman Church?
This is surely a first for the Forum!
Click to expand...

That's correct. I've been a soprano for the Sistine Chapel Choir, which is the Pope's personal choir. I've been around John Paul II pretty much every Sunday. Our Director was Domenico Bartolucci. The amount of musical knowledge and talent around us was almost unbearable, but little kids are like sponges and we always did our job very well. I must say they have a talent for finding talents. Let me know if you want to hear more.


Roch said:
I spent three years in Frosinone..my first wife was Italian..Two of my kids were born there..
Click to expand...

My father was a professor there, before coming back to Rome and becoming a principal years later. I don't visit Frosinone since years but the singer of my band lives near there. It will happen sooner or later.

Location
Over the hill

I still remember the first "corporate" pizza parlor in town. Of course a true New Yorker wouldn't spit on the best part of a chain pizza, but I was young, obsessed with music and they got me with this:
LIVE MUSIC

I already spent most of my time down in the Village, hanging out in front of the numerous music venues where my idols blew their tunes. The music was muted most of the time and we waited in breathless anticipation for someone to open the door. That was when the melodies that wafted from the inside would become a Jazz juggernaut, spilling onto the street in a tidal wave of ferocious joy. Man, those cats could play…
So, how could I ignore a place where I could actually sit down and watch musicians? Its not like I have to eat the corporate pizza. Yeah, maybe I could get by with a soda.
The first thing I noticed was how shiny everything was. The place was brand new, not like my neighborhood pizzeria: Fifty years of heat and sweat mingled with the scent of oregano and yeast. Nowhere would you see some old Puerto Rican woman, absentmindedly swiping at a greasy counter.
No matter. I was there to watch some cats play!
Cautiously I made my way through this immaculate dining room, afraid to touch anything, lest I somehow mar the plastic perfection of the place and get bounced before the jam starts. And there they were. Two silver-haired gentlemen , at least 70, dressed in matching striped shirts, red vests and hats so old even the nostalgia nerds had passed them by.
Straw Boaters. Yikes.

Banjo and accordion, eh? Well that’s original but hell, I’m game. Let her rip, boys. Everything so shiny. Their instruments glittered like the mirror ball down at The Park Hotel ballroom. Their faces, gleaming with sweat, straining to keep a smile plastered on, The gentle clacking of their shiny dentures as they forced their way through *Won’t You Come Home, Bill Bailey *for the ten thousandth time and then I saw them. I mean really saw those eyes. They weren’t shiny. They were dead, those eyes. Those poor fellows knew it was over for them. They just couldn’t stop playing.

I think of them often now that I am in my 70’s, sitting here in Lake Tahoe, just me and the keyboard guy, entertaining the tourists in the buffet line, anxious vultures obsessed with the concept of *all you can eat.*
I sit there behind my drums, one hand is all I need to play this elevator music; The other hand practicing Blackjack on the floor tom.

And I stare down the hall and wonder if anyone there has looked past the shiny stuff and really seen my eyes.

Beatles & Monkees on tv got me interested in pop music, combined with my school & church choir experience then finally assembling some used Japanese drums got me started as a singing drummer. After a local audition for an agency scout I did my first nightclub tour in Los Angeles at age 20.

Took the Greyhound bus down there with my drums underneath in the cargo bay and met the agent who had me fitted for a polyester jumpsuit and I met the band later that day. One week of rehearsal and we were off to play the nightclub circuit. It was my first time away from home on my own, and the beginning of it all. That was in 1977.

This is my first paying with that mongrel set. age 19 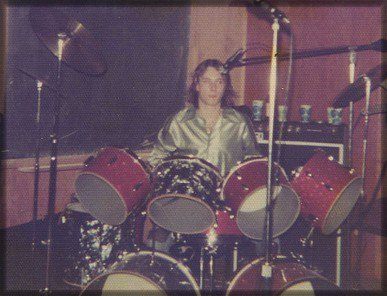 This looked like it would be so much fun.

And it has been. 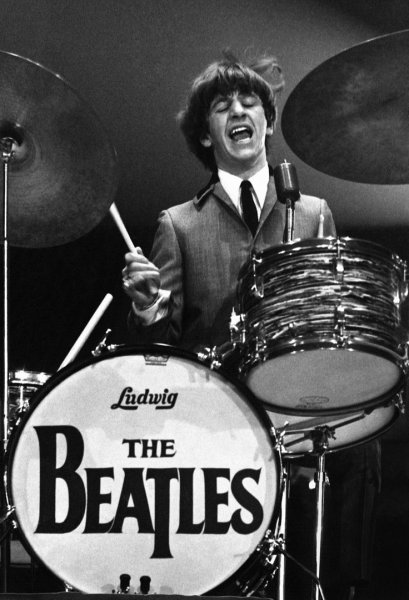 DanRH said:
I saw the Beatles on Ed Sullivan in ‘64. Game over.
Click to expand...

Me too. I was seven. Peace and goodwill.

Growing up my dad was always in a band. He was quite the guitar player but could also play pretty much anything he put his hands on. I took a liking to the drums of course.. All the band mates would leave their gear at our house and I was more than welcome to jam anytime. Luckily my parents encouraged me to play at an early age. I started gigging with my dad when I was 13 and after their drummer stepped aside for personal issues. Has been non stop since, unfortunately he’s a bad diabetic and his hands are in bad shape now.. he rarely plays anymore.

DanRH said:
I saw the Beatles on Ed Sullivan in ‘64. Game over.
Click to expand...

I grew up in suburban Maryland . Mom said I was always banging on the pots and pans as a toddler. At some point I remember watching (Whistle Stop/Don Kirshner's/Midnight Special?) a band where the drummer had gold fish in his see-thru drums! (Keith Moon?). Mom insisted that I suffer through three years of Piano lessons as a prerequisite to drum lessons. I then got sticks and a pad and Haskell Harr for a year and lessons at a local music store with rotating drum teachers. Eventually, my Mom found the right teacher for me and he came to our house once a week after he finished teaching Jr. High Band and he also played professionally in the greater D.C. area. That was when lightning struck and it all came into focus and I knew that was what I was going to do with my life. Nothing else mattered.
Last edited: Sep 21, 2021

The money for nothing and
the chicks for free.
...not necessarily in that order.
Last edited: Sep 21, 2021
You must log in or register to reply here.

17.3 pound snare made from steel pipe