How Many Of You Play Bass?

I’ve decided I needed a bass to be able to fix parts on some of my mixes. I picked up this...
A Squier Jazz bass which happens to match my surf green RC’s.
I don’t play but think I’ll pick it up on the side . 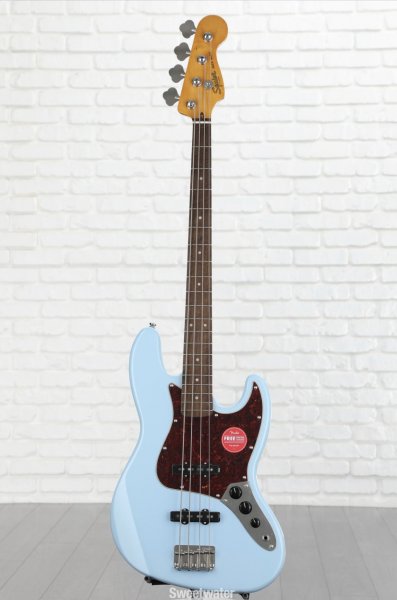 I play bass regularly. Picked it up in high school. My best friend and his dad played and I thought it was fun. Started taking it seriously while living in Nashville and actually did some session work on bass as well. Those Squiers are an excellent value. They are pretty solid and play well, and the tone is there. Have fun with it - bass can create some great tension and release in any song arrangement!

I picked this up recently. It's also a Squier, and it's great. I don't really play it, I brought it for my daughter who plays guitar and played bass in orchestra before switching to trumpet in band. But all the time I was around all the bass and guitar practicing and guitar lessons, I actually do understand it, and can play simple bass lines with a chord progression. 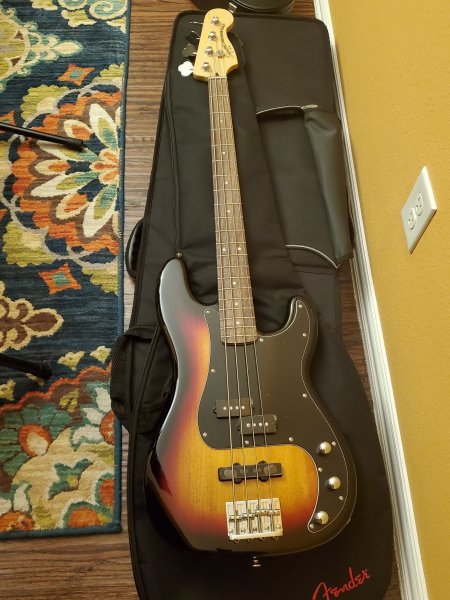 It’s funny. I was listening to an audio book (Tune In by Mark Lewisohn) and Paul McCartney was a reluctant bass player because they needed one quick and Stu Sutcliffe exited the band.

bassist here! well... “bassist”. just the other day i learned that you’re supposed to be picking over the pickups. lol. that gives you a feel. but all things considered i’d say i’m okay. only been playing for a few months, but already i can play some difficult songs relatively okay. but really i just guess the notes and once it sounds right i keep playing it that way. my technique is also probably way off, but hey whatever it’s just something i do when i can’t drum because my sisters are home and they say it’s too loud. the bass is dirty, got it from my step-dad, haven’t cleaned it once, my dad refinishes guitars and i’ve asked him to put maple lacquer over it so we’ll see how that goes.

I play bass, mainly because I would need to write all the parts for songs that I would demo. It’s never bad to have another arrow for your quiver.
Last edited: Nov 25, 2020
2

I’ve wanted to learn for years. My percussionist daughter wants to learn as well. I’m buying her one over the holidays, and may try to learn on it myself as well. Was thinking Squier also, or Used Fender player series. Is there a strong argument for precision vs jazz bass for beginners?

I play bass, although not as much as I used to. 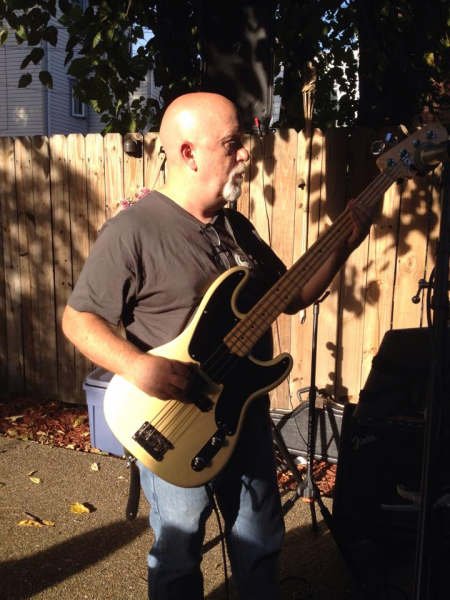 I´ve played bass for a couple of years before getting back into drums in 2017. Was my main instrument for a while, gigged quite a bit with rock and jazz bands and even recorded an album. Drums are my first love though and always will be.


219Dave said:
Is there a strong argument for precision vs jazz bass for beginners?
Click to expand...

Not really. I´d say go for whatever inspires her the most. Jazz basses have slightly thinner necks which might help people (kids) with smaller hands but as soon as you get used to playing the thing the difference is rather negligible IMHO.

I play a bit of bass, but barely... I've been messing with it for well over a decade and I still am not too far along with it. I haven't picked it up in months though so it's no wonder; I don't put in enough time with it. Because I don't really play guitar (OK, I know some chords and can strum along but have practiced on that even less) or keyboards, bass for me isn't just to work out basslines but to pay melodic ideas on. Sometimes melodic ideas will come into my head and I figure out how to play them on the bass. It's like I'm working out ideas for songs which will never be performed. I've got a somewhat recent (made within the last 20 years or so, I'd say) Fender MIM Jazz Bass...

If I were to do it all over again, I think that I may have started with bass and not drums. I like the role of the bass in the band, kind of being the bridge between the drums and everything else. I like the way that it can sound powerful playing the most minimal parts with lots of long tones and I like the feeling of playing it finger style pulling on those fat strings. I find the index/middle finger technique that I use to be a lot like the left and right hand of playing drums...
M

I have a '96 Epiphone Rivoli bass (with a nice DiMarzio pick up), and a Trace Elliot BLX80 amp.
I don't play per se, rather plomp around from time to time, however when I was teaching drums...."locked down" recently....I would play a simple bass line to accompany whoever was on the drums. For some folks it was the first time they played with someone else aside from the two drum kits.
I have always encouraged drumming students to learn how to listen to musical parts, other players, and to be melodic. I could also demonstrate different note values and musical feels on the bass so they/we could interact rather than playing "exercises".
My house is full of instruments...high and low tech...and depending on the student sometimes we wouldn't even get to the drums.....we'd play African marimba instead. My partner played in a marimba band and we have a few of them here. We would do our "diddles" on the snare and kits...then do those "diddles" on a marimba and they would get it a bit better. Then go back to the drum(s) with a different perspective.
I have no interest in jamming on bass with folks, but is fun to noodle around. I don't want to get too good, or pretentious as then I would be part of the noodly doodly bunch....uhhh yeah right.
bt

As a kid I played guitar and in my teens and early twenties played bass. The first band I was in, I played bass. It was good fun and helped me develop as a musician. I guess we should all play any instrument we can, if we get the chance.

I have Yamaha bass guitar and a Peavey TNT 115 S amp that I poke around on . First thing I learned was Papa was a Rolling Stone . 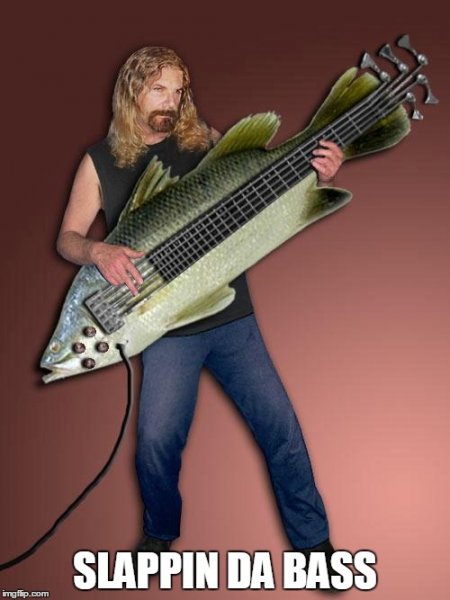 I play some guitar and bass. I played bass in a band once, it was nice being up front on stage

I've played for about ten years, but never had lessons and don't practice as much as I should so I'd consider myself in the beginner, almost intermediate category. I played bass in a surf/garage band for a few years and did an EP and full length album, plus I'm recording a solo EP and it's easier than sending the files to our bass player. I started with the acoustic bass so I wouldn't have to worry about an amp, plus that gave me an excuse to get the electric one later when I needed it to play gigs, but don't tell my wife I also made a pedal board for a tuner, compressor (I've upgraded since this pic), and a Pi Big Muff, plus I have wireless hidden underneath. 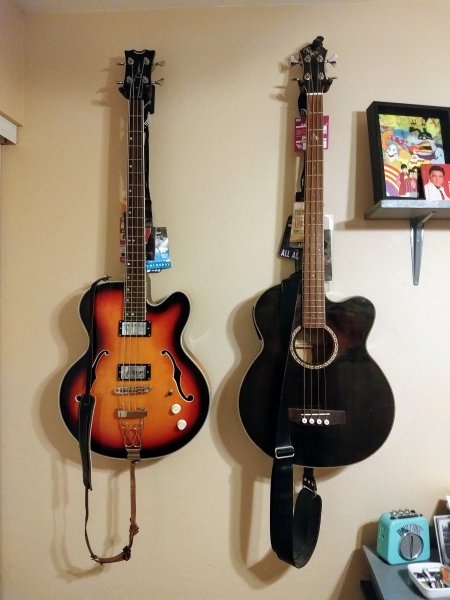 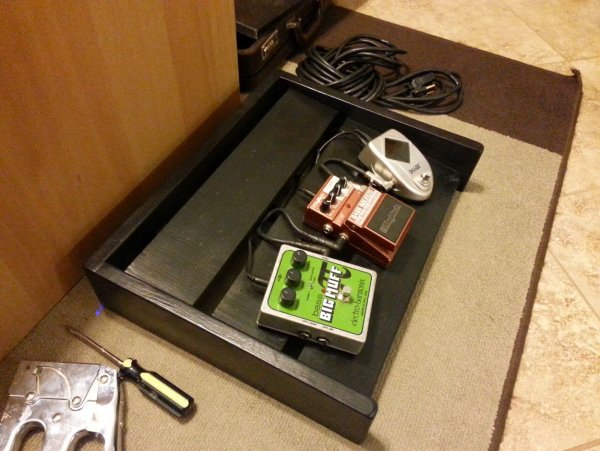 When I was in high school I wanted to learn bass for the orchestra. Instead, the band director (who was a great bass player) wanted me to teach drums to freshmen during that period.

So, I never got to learn bass AND I learned I never wanted to be a teacher again.