First OP so hopefully I have done everything right
I used to be on PDF about ten years back, but not much action there nowadays it seems. Glad I found this place!

I'm looking at a (likely late 70s/early 80s) Pearl Wood Fiberglass kit but am wondering about my options for add-ons. Anyone have a clue as to whether the newer W/F drums by Pearl would blend with the old ones in terms of sound?

The newer ones are Kapur wood which I don't know much about. I gather the older ones are luan. Anyone have a clue how comparable they are construction- or soundwise?

First option is of course to find perfectly matching drums, but who knows when that'll happen. Newer W/Fs are discontinued as well, but it should at least up my chances if they are a solid 2nd option. If i pick up the kit I don't want to throw any ol' Export tom on there

Never played an old W/F Pearl kit but I have a new one in my studio and I love it. I did play a fiberglass concert tom Pearl kit in the late 70’s which was also great. Sorry I can’t give you any advice on the differences.
C

Thanks for the reply! They're cool kits. New ones are really nice as well. Did you find them excessively loud? WFs have a bit of a reputation that way, if not as much as the all-fiberglass.

The original WFs are quite common on eBay. Might take you a bit of waiting, but I'd bet you'll find anything but the rarest sizes on there some time over the course of a year.
There is a really active vintage Pearl Facebook group that's a good resource for orphan drums and knowledge, too.

Billy Baker in particular does a lot of work with the all-fiberglass drums, but he might have some WF stuff,too.

If they're a reasonable price and you like the sizes, I say go for them. 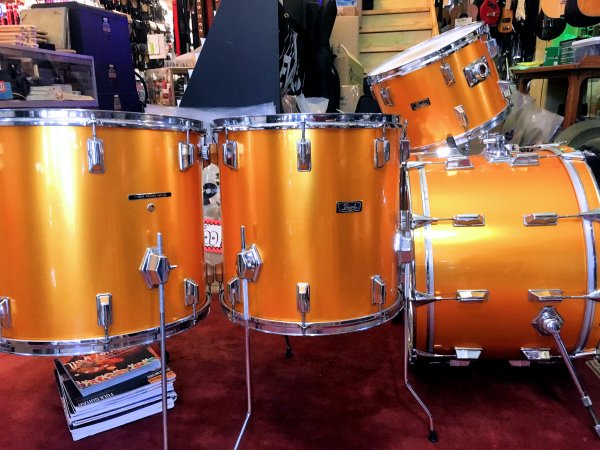 Very tempting I'd guess! I love that orange metallic finish on 70s Pearls. I believe it was called Orange Flash, at least at one point. Very cool kit!

buy that one...you will love the sound... if not , could you tell me the name of the shop that has them?

musicman64 said:
buy that one...you will love the sound... if not , could you tell me the name of the shop that has them?
Click to expand...

They were. I just left his store. They sold last week! Russell told me he let them go for $275. I was tempted, but I really wasn't feeling the 10x14 mounted tom.

To the OP: I had a set of the reissues for a time; they were great sounding drums, albeit heavy! 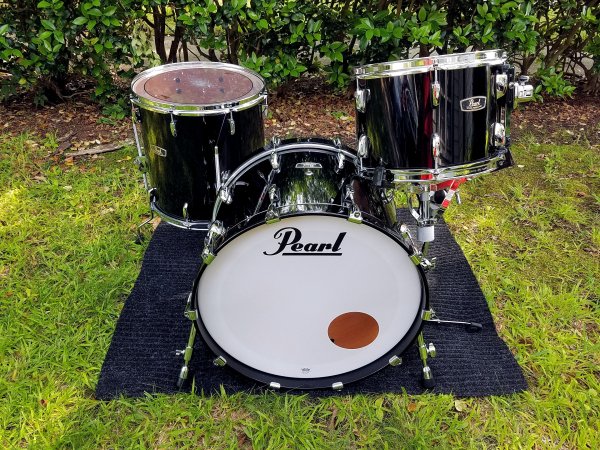 @AaronLatos That's good to know, thanks!

(Very much looks like I'll be picking up one of these kits soon!)
C

(Sorry for the long self-hijack!)
Would you guys rather go for a kit that's in really good condition, or one in lesser condition but at a (probably) lower price?

Mainly there is some significant damage to the finish, clearly visible in photos. Also there have been large stickers on some of the drums. Where a sticker was there looks like there could be some very visible discoloration at worst, and some tape residue to peel off at best.

Regarding price, here's the kicker: The bigger kit also comes with a handful of junk cymbals e.g. Meinl Headliner etc (two hihats and I think four other crash and ride cymbals) and a bunch of stands. It also comes with two (!) chrome finished snare drums. Not unlikely one of them's a Jupiter that came with the kit. I suspect it may be the original owner selling it.
With these "extras", the price is almost that of the rock config, but they could probably be talked down just a bit. However if I manage to sell off the extras, which isn't a given in my experience with the current market, that could drop the price quite a bit in the end.

I'm not in the US but let's say the Rock kit is $500. Probably not too flexible.
The Big kit, I think I could maybe get them to do $400 for the lot. The 24" kick an 18" floor is $100.
By selling the Big kit extras, with any luck I should at least raise $100.
The Rock kit is also far enough away to likely have me checking into a hotel, which is another expense to be taken into account. It's at this point a bit of a strain on my current budget as I'm still selling some stuff off.

I'll of course be checking stuff in person Before buying, especially the one in uncertain condition.

Thanks for any advice!
C

Obviously both are W/F kits! Both are non-hex arm tom holder so likely mid-70s to early 80s?
You must log in or register to reply here.