We lost one of the greatest drummers that flew under the radar, Mr. Melvin Parker (born June 7, 1944, Kinston, North Carolina) was a drummer. He and his brother, saxophonist Maceo Parker, were key members of James Brown's band. Parker's drumming style was a major ingredient in Brown's funk music innovations in the 1960s.

In 1964 and 1965 Parker was the drummer on three of Brown's recordings: "Out of Sight," "Papa's Got A Brand New Bag," and "I Got You (I Feel Good). "The greatest drummer I ever had in my life was Melvin Parker," Brown reflected in 2004. "'I Feel Good', 'Papa's Bag' (sic) – nobody ever did that. Nobody. And they can't do it now. And if I was getting ready to cut a record that was right, I would go get Melvin today, because he's just like a metronome."
Parker's first association with Brown ended when he was drafted in the mid-1960s. He was replaced in the band by Clyde Stubblefield and Jabo Starks. Parker rejoined Brown's band in 1969, and appeared on the album Sex Machine. In 1970, Parker was part of a mutiny by Brown's band. After leaving Brown, Parker joined his brother Maceo's band, Maceo & All the King's Men. He rejoined Brown briefly in 1976, and played on the hit "Get Up Offa That Thing" 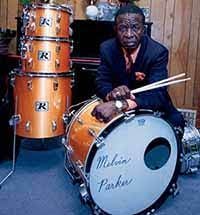 It's the one song just about everyone on earth has heard.

Clyde is The Godfather but the flame always burned a little hotter with Melvin to me - RIP king.

What an absolute unsung drumming hero. Is there a single drummer today that wasn't influenced, directly or indirectly, by Melvin Parker?

"Parker and his brother Melvin joined James Brown in 1964;[1] in his autobiography, Brown claims that he originally wanted Melvin as his drummer, but agreed to additionally take Maceo under his wing as part of the deal.[4] In March 1970, Parker, his brother Melvin, and a few of Brown's band members left to establish the band Maceo & All the King's Men,[1] which toured for two years.[5 "