I gigged on a Gammon kit!

So yesterday at the local library, Rosewood, a group of 5 high school kids, had its first concert. The opening act was my 11 y.o. son' guitar group, but only the 2 main teachers (Ms. Amy the main one acoustic electric plugged in, and the #2 on harmonica), the best "kid" in the group of 40 (Alex, a H.S. junior and a really good singer songwriter), and my 11 y.o., who was asked by the teachers to showcase. I was on drums. Two of Rosewood's players started in my son's group so it's exciting to see them now be in a full blow band.

The day before, at rehearsal, I had asked the drummer of Rosewood about his gear and volunteered to help him set up. He confirmed he had drums check, pedal check, throne check, HH stand & cymbal stands check, and cymbals check. But he said his cymbals suck - fine - I will bring you cymbals. All was clear - great!

At the gig, it was nice to just show up with a cymbal bag and stick bag versus lugging in the rest. Anyway, the kid came over and I went to his kit. It was an electric blue Gammon kit - 12/13/16/22 with matching snare. Fine...whatever. I pulled out my HH's (14" IAK over 14" quick beat top) and my array of cymbals - 22 Bosphorus traditional ride, 19" Soultone vintage old school patina crash, and a Dream 18" vintage bliss crash ride (my gigging rig, which this kid played at our April gig - he used my entire set during Rosewood's 2 song"world premier" & first live gig!)......

As I hold cymbals for him to test & mount, I realized something - "Uh, where are your stands, man?" Of course, he says, "I though YOU were bringing them." Noooooooo! Great, so we have no stands and 20 minutes to gig time. He asked if I can go home and get mine - nope - it's too far away. I am thinking if we tape the HH's closed & put them on a chair, he can get a sort of HH sound. I am trying to figure out how to mount a ride using string maybe off a mic stand, but no luck. Meanwhile, he sent his mom home to get what he has - a Gammon black HH stand and one cymbal stand.

Now I've had & played cheap crappy kits & hardware, but this took the cake. I tightened the wing nuts on each drum but it literally felt like the wing nuts would snap and/or strip. The HH legs were bent and I could simply bend them back to make it somewhat level. The cymbal stand had no sleeve so I had to jerry rig one out of painter's tape. He settled on the 19" crash as the sole cymbal. Oddly, he had a plastic pouch full of sand (WTF???) on the snare as a muffler (it was a fat thud), and literally a textbook on the FT to muffle it! The bass had something inside (blanket?) and actually sounded nice and thumpy. I quickly tuned the drums as they were out of whack and the entire kit act sounded sorta like a drum set now.

We did our 3 songs - my kid sang chorus on This Land is Your Land with the head teacher doing verses, I've been working with him on blues slide guitar (we play the Monterey Blues fest end of June!) and he nailed a sweet slide solo on House of the Rising Sun, and our last song is all his - Todd Rundgren's Bang the Drum - he killed it - both playing & singing! We got off the stand and Rosewood took the stage - they played 10 songs and were a mix of Nirvana, punk, garage, angst & had a Neil Young Crazy Horse vibe - heavy guitars and minor chords.....and they rocked out! Alex then played a few songs solo and then there was an open mic for other local H.S. kids, then Alex closed the show with a John Mayer cover. He wanted all 3 teachers to sit in - the main lady plugged in, the harmonica played, and I played along, too. I didn't know the song but it must have been an easy one if I could pick it up on the
fly. I put my phone on top of the curve on my son's guitar (where the EQ is) and I had the tab open so it was easy to follow....perfect little hideaway for it.

But I felt awful for the drummer kid, though. His cymbals were those Gammon branded "first cymbals" that are yellow and arguably metal but that's all they have in common with real cymbals! I am going to gift him a set of used Sabian B8 hats, a 16" crash & 20 ride I have laying around........so perfect timing for him there! But the real joy was watching my 11 y.o. dude delve into the blues and expand his amazing skills.......

Afterwards, we were driving back and he goes, "Dad, I think Kashmir's a better song than Stairway to Heaven." Whaaaaaaaaaaaaaat??? I didn't know how to respond to that one........whoa! The kids got some skills and they ain't my genes......that's a whole 'nuther conversation! 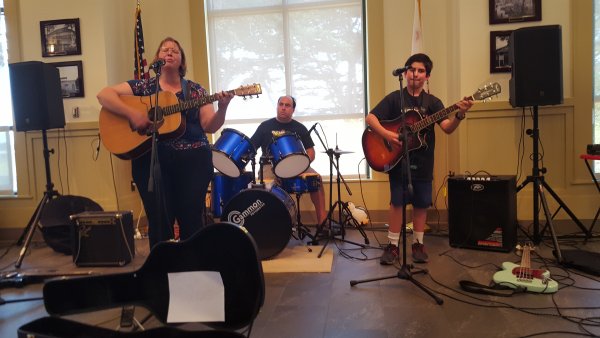 That sounds like a heck of a time, awesome you made it work! That blue wrap is kinda cool lookin, electric!

Great story! Sounds like you had a great night. Very nice of you to gift him those cymbals. Great thing to do. I'm sure he's gonna love them
T

Well I mean, Kashmir is better than Stairway. Just wait until he gets to Achilles Last Stand.
You must log in or register to reply here.